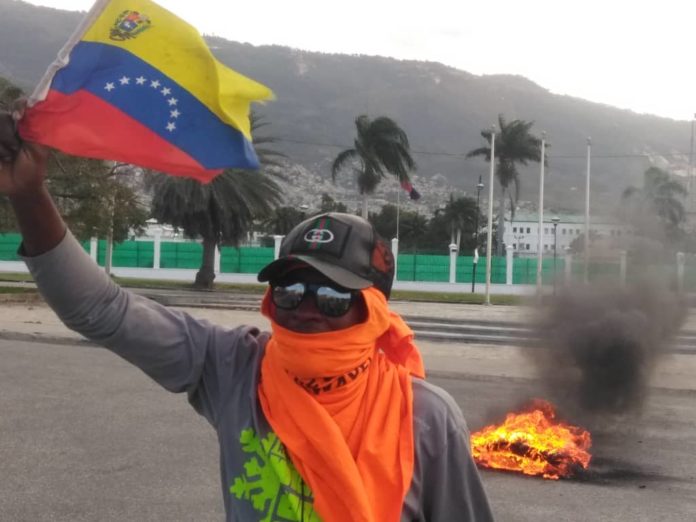 Chaos reigns in Haiti for a seventh straight day as its masses continue to rise up nationwide to drive President Jovenel Moïse from power for his corruption, arrogance, false promises, and straight-faced lies.

But the crisis won’t be solved by Moïse’s departure, which appears imminent.

Today’s revolution shows all signs of being as profound and unstoppable as that of 33 years ago against playboy dictator Jean-Claude “Baby Doc” Duvalier, whose Feb. 7, 1986 flight from Haiti after two months of rebellion to a golden exile in France on a U.S. Air Force C-130 cargo plane was just the beginning of five years of popular tumult.

Despite fierce repression, massacres, a bogus election, and three coups d’état, that uprising culminated in the remarkable political revolution of Dec. 16, 1990, when anti-imperialist liberation theologian Jean-Bertrand Aristide was elected President in a land-slide and then, declaring Haiti’s “second independence,” inaugurated on Feb. 7, 1991.

At a time when Nicaragua’s Sandinistas and the Soviet Union had just been vanquished, the Haitian people defeated Washington’s election engineering for the first time in Latin America since Salvador Allende’s victory in Chile two decades earlier. Haiti’s example inspired a young Venezuelan army officer, Hugo Chavez, to adopt the same play book, and hence began a “pink tide” of political revolutions via elections across South America.

Just as Washington had fomented a coup against Aristide on Sep. 30, 1991, it carried out a similar one against Chavez on Apr. 11, 2002. But the latter was thwarted after two days by the Venezuelan people and army’s rank-and-file.

Despite this victory, Chavez understood that Venezuela’s 1998 political revolution that had brought him to power could not survive alone, that Washington would use its vast subversion machinery and economic might to wear down his project to build “21st century socialism” in Venezuela, and that his revolution had to build bridges to and set an example for his Latin American neighbors, who were also under Uncle Sam’s thumb.

Thus, using Venezuela’s vast oil wealth, Chavez began an unprecedented experiment in solidarity and capital seeding, the PetroCaribe Alliance, which was launched in 2005 and eventually spread to 17 nations around the Caribbean and Central America. It provided cheap petroleum products and fabulous credit terms to member nations, throwing them an economic life-line when oil was selling for $100 per barrel.

By 2006, Washington had punished the Haitian people for twice electing Aristide (1990, 2000) with two coups d’état (1991, 2004) and two foreign military occupations, handled by the United Nations. The Haitian people had managed to win a sort of stalemate, by electing René Préval (an early Aristide ally) as president.

On the day of his May 14, 2006 inauguration, Préval signed up for the PetroCaribe deal, greatly vexing Washington, as outlined by Haïti Liberté in its 2011 reporting using WikiLeaks-obtained U.S. secret diplomatic cables. After two years of struggle, Préval eventually got Venezuelan oil and credit, but Washington made sure to punish him too. Following the Jan. 12, 2010 earthquake, the Pentagon, State Department, and then-head of the Interim Haiti Recovery Commission Bill Clinton, with some flunkies from the Haitian elite, virtually took over the Haitian government, and in a November 2010 to March 2011 election process, they pushed out Préval’s presidential candidate, Jude Célestin, and put in their own, Michel Martelly.

From 2011 to 2016, the Martelly group went on to embezzle, misspend, and misplace the lion’s share of the capital account known as the PetroCaribe Fund, which had basically kept Haiti afloat since its creation in 2008.

Martelly also used the money to help his protégé, Jovenel Moïse, come to power on Feb. 7, 2017. Unfortunately for Moïse (having come to power just as Donald Trump did), he was about to become collateral damage in Washington’s escalating war against Venezuela.

Surrounded by a gaggle of anti-communist neo-cons, Trump immediately stepped up hostility against the Bolivarian Republic, slapping far-ranging economic sanctions on Nicolas Maduro’s government. Haiti was already in arrears in its payments to Venezuela, but the U.S. sanctions now made it impossible to pay their PetroCaribe oil bill (or gave them a golden excuse), and the Haiti PetroCaribe deal effectively ended in October 2017.

Life in Haiti, which was already extremely difficult, now became untenable. With the Venezuelan crude spigot now closed, Washington’s enforcer, the International Monetary Fund (IMF), told Jovenel he had to raise gas prices, which he tried to do on Jul. 6, 2018. The result was a three-day popular explosion which was the precursor to today’s revolt.

At about the same time, a mass movement began asking what had happened to the $4.3 billion in Venezuelan oil revenues which Haiti had received over the previous decade. “Kot kòb PetroCaribe a?” – “Where’s the PetroCaribe money?” – growing thousands of demonstrators asked. The PetroCaribe Fund was supposed to pay for hospitals, schools, roads, and other social projects, but the people saw virtually nothing accomplished. Two 2017 Senate investigations confirmed that the money (the second report said $1.7 billion) had been mostly diverted into other pockets.

So, what was the straw that broke the camel’s back? It was the treachery of Jovenel Moïse against the Venezuelans after their exemplary solidarity. On Jan. 10, 2019, in a vote at the Organization of American States (OAS), Haiti voted in favor of a Washington-sponsored motion to say that Nicolas Maduro was “illegitimate,” after he won over two-thirds of the vote in a May 2018 election

Already, Haitians were angry about the unbridled corruption, hungry from skyrocketing inflation and unemployment, and frustrated from years of false promises and foreign military humiliation and violence. But this spectacularly cynical betrayal by Jovenel and his cronies, in an attempt to win Washington’s help to rescue them from the growing fires beneath them, was the last straw.

Surprised and paralyzed by its lack of options (and its own internal squabbles), Washington is now watching with horror the not-so-sudden collapse of the rotten political and economic edifice it has built in Haiti over the past 28 years since its first coup d’état against Aristide in 1991 until its latest “electoral coup d’état” which brought Jovenel to power in 2017.

The U.S. Embassy is surely feverishly seeking to cobble together a stop-gap solution, using the UN, OAS, Brazil, Colombia, and the Haitian elite as their helpers. But the results are likely to be no more durable than they were in the late 1980s.

Ironically, it was Venezuelan solidarity which may have postponed for a decade the political hurricane now engulfing Haiti.

It is also fitting that U.S. aggression against Venezuela’s Bolivarian revolution has created a cascade of unintended consequences and blowback, fed by the Haitian people’s deep sense of gratitude and recognition for Venezuela’s contribution to them, just as Hugo Chavez and Nicolas Maduro often said that PetroCaribe was given “to repay the historic debt that Venezuela owes the Haitian people.”