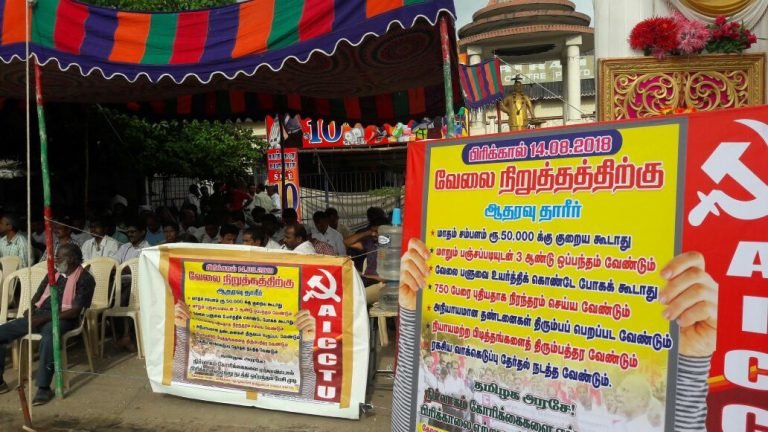 Workers have faced retributive actions for organizing and participating in protests for their rights (Photo: NewsClick)

Talks broke down earlier this week between workers and the management at the Royal Enfield motorcycle factory in Chennai, after the company remained adamant at transferring away union leaders and other workers. Meanwhile earlier, on February 11, Indian automotive components manufacturer, Pricol, terminated the contracts of 294 workers from its Coimbatore plant in the southern Indian state of Tamil Nadu, for not complying with an earlier transfer orders against them. These incidents are just snippets of the daily struggle of workers in India’s automotives hub of Tamil Nadu, whose capital, Chennai, has earned the nickname of being the ‘Detroit of Asia’. Over a year now, industrial relations in Tamil Nadu is fast deteriorating, as companies punish workers for organizing with trade unions.

Earlier this week, workers at the Royal Enfield motorcycle factory in Chennai’s Oragadam held a demonstration against the company’s transfer decisions. The transferred workers include the general secretary of the union of the Royal Enfield Employees Union (REEU), along with several female employees. Soon after the decision was made public, the union demanded meaningful engagement. However, the workers decided to protest after the negotiations failed.

“Management should stop unfair labor practices and victimizing workers for taking part in trade union activities. It should abide by the law and respect the workers’ right to join unions. It should give equal rights to contract workers and resolve the dispute through meaningful negotiations,” S. Sampath, associated with the Working People Trade Union Council, said in response.

According to protesters, the decision of transferring senior members of the union was taken by the company in view of further undermining the union’s demands for regularization of precarious workers in the ongoing collective bargaining negotiation.

Other than the withdrawal of these transfers, the union, which has a strength of 5,500 workers, demanded the employment of all workers who complete 480 days of work to be regularized. “Employees working more than a month must be provided with a bonus. All transfer orders and vindictive actions should be revoked. Meaningfully engage with collective bargaining agreement. National Employability Enhancement Mission workers engaged in permanent work must be stopped,” read the statement by the REEU.

Earlier in January, the Royal Enfield management initially transferred the union members to different locations in Chennai, but the union managed to get the company to withdraw the decision through prompt negotiations. Many activists supporting the union’s call for protest have stated that the transfers are unacceptable and the management’s anti-union tactics to intimidate young workers are condemnable.

For almost three months, between September to November 2018, the Royal Enfield company witnessed prolonged demonstrations that ended once the company gave the assurance of the collective bargaining agreement. As per one report, this strike was part of a spreading wave of workers’ struggles across India. Similar issues are brewing in automotive factories across the state.

The arbitrary mass transfer and the subsequent termination at the Coimbatore factory of the auto components manufacturer, Pricol, is a case in point. The workers were earlier protesting for better wages, payment of wage dues and union rights for over a hundred days between August and December 2018, under the banner of Kovai Manila Pricol Thozhilalargal Otrumai Sangam (KMPTOS). But right after the strike, which ended after assurances from the management of no victimization of the protesters and a meaningful negotiations, the company ordered transfers of 302 union leaders, organizers and several key participants of the protest, on December 3. The transfers were made outside of Coimbatore city, mostly to other parts of the country, in what is widely seen as a retributive action from the company.

Speaking to Peoples Dispatch, S. Kumaraswami of the All India Central Council of Trade Unions, to which KMPTOS is affiliated, who was at the forefront of the protests at Pricol, deemed the actions “totally illegal”. He said transfers were a “punishment for participating in the protests”. Of the 302 workers transferred only 8 have complied, while the other 294 workers have refused to do so. In response to that the company terminated their contracts on February 11. Kumaraswami explained, that according to the laws of industrial disputes “the company cannot terminate or transfer those workers involved in an ongoing dispute with the management”. The 294 workers and trade unionists were granted an interim relief when they challenged the termination at the Madras High Court, which stayed the company’s decision. But the fight goes on.

Employees that take on the battle for better the rights that they are owed, have to pay a steep price for their politics. Like in Pricol, their salaries for the days they protested are withheld, even though such actions are illegal under existing laws. Workers who organize among themselves are also not allowed to enter their factories, and are often transferred to other factories, since dismissals are not allowed in such cases. When asked of how the workers at Coimbatore are managing with their salaries withheld since September, he admitted the condition right now is not easy. “When you strike work or confront the management, these are the dangers you have to face” he added, “… workers are finding it very difficult, but still they feel they will have to carry on the struggle and they should not give up. That is the fighting spirit of the worker.”

And one can see this spirit not just in Coimbatore and Chennai but across the state, from factories of Yamaha and Myoung Shin Automotives India, where workers are confronting the management. Hundreds of workers in Hyundai, Sanmina, Myunghwa and other factories have also organised themselves against their company’s refusal to meet their demands.