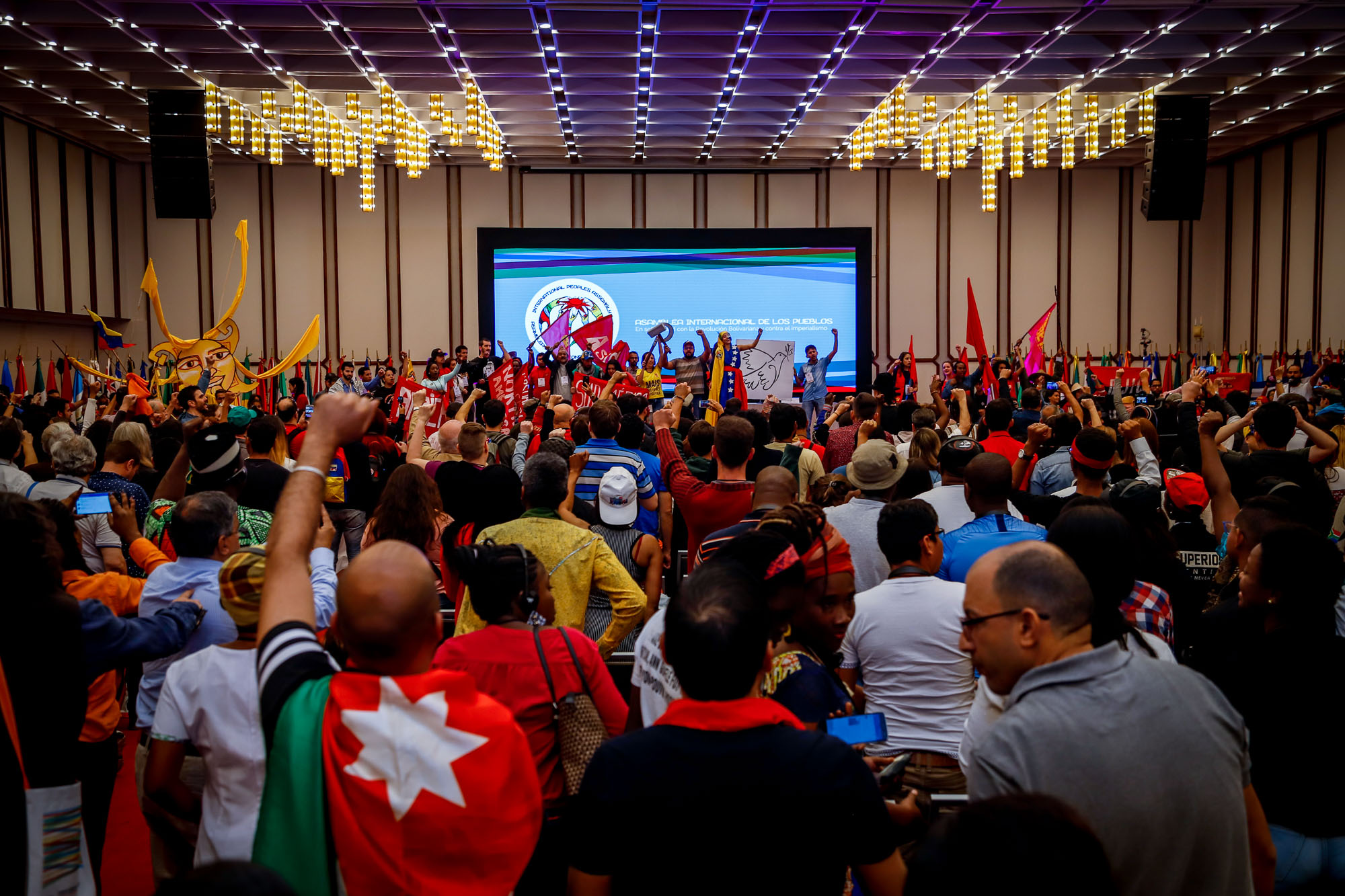 Opening Mística of the International Peoples' Assembly in Solidarity with the Bolivarian Revolution. Photo: Rafa Stedile

People from across the world have come to Caracas to join together as left, anti-capitalist, anti-imperialist, anti-patriarchal and anti-racist forces to affirm their solidarity with the Bolivarian Republic of Venezuela and denounce the fierce attacks it currently faces by the US empire and its allies. The meeting is taking place at a key moment in Venezuela as it is currently a most brutal attacks on all fronts from the US empire and its allies.

The event was launched with a vibrant mística ceremony celebrating traditional Venezuelan dance and music, as well as a show of the diversity of the encounter itself. Participants waved flags of their organizations and countries. The ceremony concluded with the rousing notes of The Internationale in languages from across the globe resonating through the hall.

William Castillo, the vice-minister of international communication of the Foreign Ministry in Venezuela, moderated the morning session along with Silvana Broggi of the Argentine Movement Patria Grande.

The current mayor of Caracas Erika Farías opened the panel and reflected on the history of attacks against the Bolivarian Revolution since its conception. “From the year 1999 until now –it has continued — this is a people who struggle and continue to win and win. That is what happened in the last couple of days, with the pantomime that they wanted to orchestrate on our border. Yesterday a journalist asked us: So what will happen tomorrow, February 24? Well tomorrow, on the 24, the International Peoples’ Assembly will begin, Nicolás will continue being the President of the Bolivarian Republic of Venezuela and the people of Venezuela will continue struggling, building, working”.

Member of the National Board of the Landless Rural Workers’ Movement Joao Pedro Stedile spoke about the history behind the International Peoples’ Assembly and the current process of building a united international front of left forces across the world. He highlighted that an encounter of this kind could only be done in Venezuela, as it is the principle trench of the struggle against imperialism.

Claudia de la Cruz from the United States, who is part of the Popular Education project, affirmed that “The fact that we are here is testimony of our resistance as people and as working class. We are here committed and daring to work towards internationalism, for a socialist and revolutionary agenda, for the advance of the struggle of our people.”

Prashad termed Venezuela as the epicenter of the confrontation between the forces of imperialism and socialism, a territory to defend. “Here, in Caracas, the dreams of ordinary workers and peasants and the urban poor stand against the guns, news and dollars of imperialism. We are here to say Hands Off Venezuela. What we are also saying when we say Hands Off Venezuela is Viva Socialism.”

The activities will continue until February 27 and participants will debate and discuss ways to link their struggles and build a strong united platform to stand in solidarity with Venezuela and in defense of its revolution.

Venezuela files complaint in International Criminal Court against US sanctions

Trial of Venezuela embassy protectors begins in the US
RECENT ARTICLES