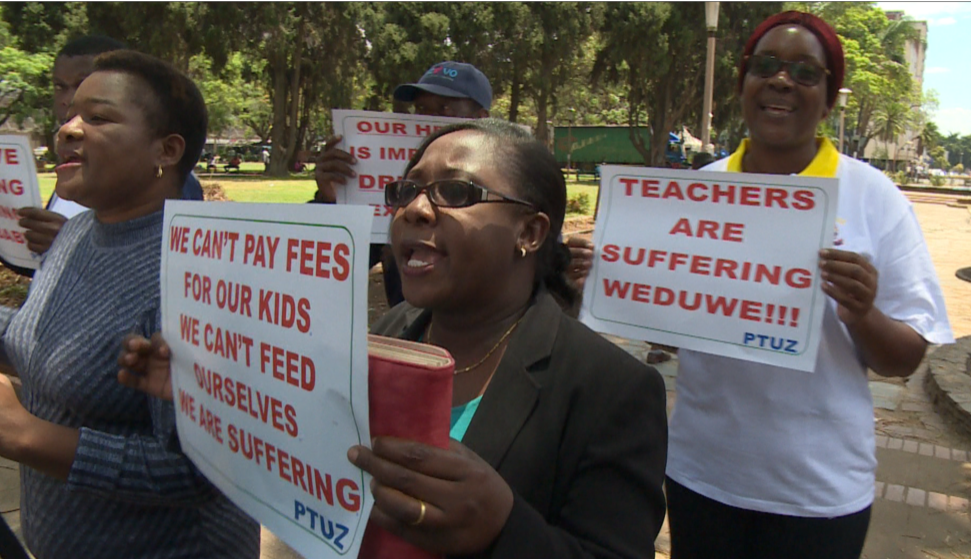 Over the past few months, Zimbabwe has been rocked by protests over the hike of petrol prices, as well as demands by various sections of society, including doctors, teachers and civil servants, who have sought salary rises and an end to the system of payment through bonds.

The Trump administration has extended by one year the US sanctions against Zimbabwe, which were set to expire on March 6. Numerous African leaders, including South African president Cyril Ramaphosa, have been urging the US to lift these actions to help the country recover from the economic crisis it is reeling under.

However, the statement on the White House’s website on March 4, signed by Donald Trump, claimed that in order “to deal with the unusual and extraordinary threat to the foreign policy of the United States” posed by government officials of Zimbabwe, the president has decided to extend by one year the sanctions against a long list of persons and entities associated with the Zimbabwean government.

The list contains the names of 128 former and serving senior government officials and 33 firms. Except for two investment firms and Zimbabwe Defense Industries (Pvt) Ltd, almost all of the remaining firms are farms, which the US government has determined to be an “extraordinary threat”.

Notably, the text of the statement, except for the change of date, has been copied – word to word and comma to comma – from the statement released by White House in 2016 under the name of then president Barack Obama, who decided to continue the sanctions originally imposed by his predecessor, George W. Bush.

Over the past few months, Zimbabwe has been rocked by protests over the hike of petrol prices. Various sections of society, including doctors, teachers and civil servants, have also gone on strike, seeking salary rises and an end to the system of payment through bonds.

It was in 2003 that Bush, according to his statement, “determined that the actions and policies of certain members of the Government of Zimbabwe and other persons to undermine Zimbabwe’s democratic processes or institutions, contributing to the deliberate breakdown in the rule of law in Zimbabwe, to politically motivated violence and intimidation in that country, and to political and economic instability in the southern African region, constitute an unusual and extraordinary threat to the foreign policy of the United States.”

No explanation was provided as to how the undermining of the democratic practices in Zimbabwe constituted a threat to US foreign policy when other countries in Africa and elsewhere, which do not even have a pretense of democracy, have not been targeted with sanctions, and some have even received backing from the US.

Nevertheless, in order to deal with this “threat”, Bush declared a “national emergency” with respect to Zimbabwe, and blacklisted 77 of its senior government and military officials, including the then president Robert Mugabe. All “property and interests in property” of these officials in US or under the control of its “overseas branches” were ordered to be confiscated.

Companies and individuals in US were prohibited from “making or receiving of any contribution of funds, goods, or services to or for the benefit of any” of the blacklisted persons by Executive Order 13288 passed in March 2003.

Further, “any person determined by the Secretary of the Treasury, in consultation with the Secretary of State, to be owned or controlled by, or acting.. on behalf of, any of the persons listed” were also to be targeted with these sanctions.

Not satisfied with the outcome, Bush expanded the scope of these sanctions with Executive Order 13391 in 2005, which removed some of the names from the original list but added new ones, expanding the list to include 128 senior officials.

Further, the order also extended the applicability of sanctions to the immediate family members of the blacklisted officials, and anybody else the US secretary of treasury determines to be in control of or acting on behalf of these the blacklisted officials – which included ministers and deputy ministers, governors, members of parliament and politburo, the president, vice-president and senior officials of armed forces.

This long list, virtually encompassing heads of all government departments, allows anybody serving the government in any capacity to be targeted. Also sanctioned was anyone the Secretary determines to have “provided financial, material, or technological support for, or goods or services in support of, such actions or policies.. [by] any person” whose name is included in the new list. Also, it was specified that those individuals whose properties are to be confiscated in accordance with this order need not be served a prior notice.

While the previous order in 2003 had only targeted individuals, this new order in 2005 also included in the blacklist 33 firms. 28 of these firms being farms. Zimbabwe’s agriculture sector has been the biggest target of these sanctions.

Three years later, Bush yet again expanded the scope of these sanctions with Executive Order 13469 passed in July 2008. As per this order, targets of the sanction can include any person identified as “a senior government official” or as being “controlled by, directly or indirectly, the Government of Zimbabwe”. This update, in effect, allows almost any Zimbabwean’s property in US jurisdiction to be confiscated.

These sanctions against Zimbabwe were continued by his successor Obama, and now by Trump, who, in the statement he issued on March 4, did not even bother to change the words used in Obama’s 2016 statement.

Successive US governments, helmed by Republican and Democratic presidents, have continued target Zimbabwe, without explaining to US citizens or to Zimbabweans how corruption and other undemocratic practices of the government of Zimbabwe, which the US is supposedly concerned about, constitutes an “unusual and extraordinary threat to the foreign policy of the United States.”