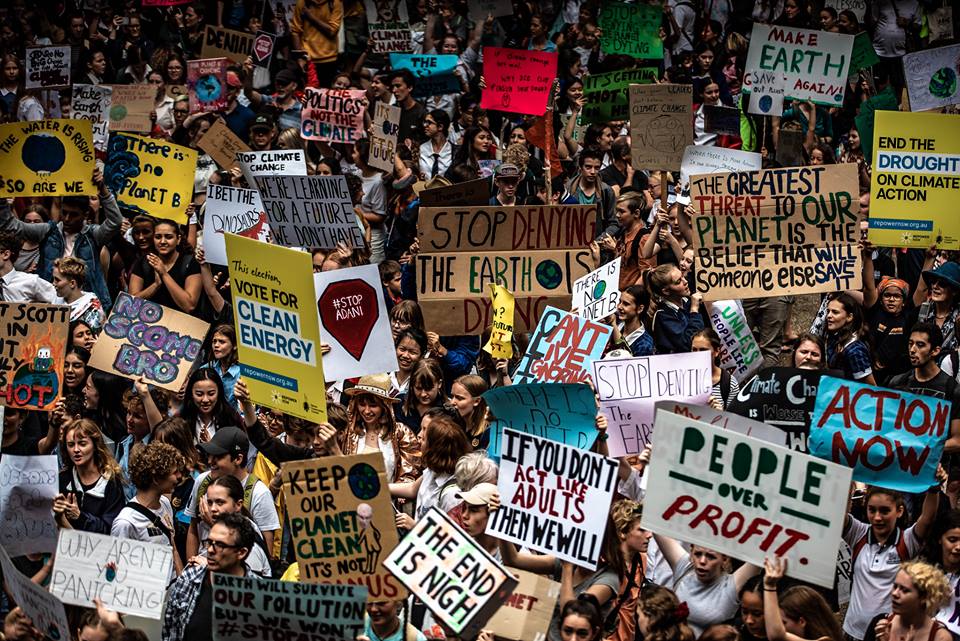 Another day of action is scheduled for May 24.

On March 15, around one million students and youth hit the streets across the world as part of the Global Climate Strike, demanding stronger action and policies to address climate change.

Some of the demands of those who took part in the strike are the imposition of climate emergency and the communication of the severity of the ecological crisis to the general public. Additionally, campaigners want the curriculum reformed to address climate change as an educational priority, alongside including youth voices in policy making and lowering the voting age to 16.

Thousands of school students boycotted classes and marched across Australia and New Zealand on Friday as part of the global student strike. According to reports, students carried placards with slogans such as “Climate change is worse than Voldemort”, “I bet dinosaurs thought they had time too”, “The oceans are rising, so are we’ etc. The Communist Party of Australia was among the organizations which expressed its solidarity with the the students.  Strait Times reported that New Zealand prime minister Jacinda Ardern, who has pledged 100 million NZ$ to reduce greenhouse gas emissions, had also supported the student strikes, saying teenagers should not wait until they were old enough to vote to raise their voice.

Marches and meetings were also held in Japan, Taiwan, Hong Kong, Thailand, South Korea, Philippines etc., and a social media vigil was observed in Singapore. Reports also came of students in Indian cities such as New Delhi, Allahabad etc, as well as those in Mauritius, Nigeria, Kenya and South Africa joining the climate strike .

Youth Strike 4 Climate said that in the UK, approximately 100 registered strikes took place in various towns and cities from Penzance to Aberdeen. Approximately 50,000 students demonstrated across the breadth of the country, with particularly large events being held in London (20,000) and Brighton (4,000), as well as in Leeds, Sheffield, Manchester, Cambridge and Birmingham. Participation in the protests was larger than the first event on 15 February, which saw over 15,000 students attend strikes and demonstrations in more than 64 towns and cities.

Onwards the Global Climate Strike, youth organization Red Fox, affiliated to Belgian Workers Party (PTB), conducted a two-day workshop for students on climate on March 6-7. According to reports, 60 high school students, aged 14 to 18, protested in front of the headquarters of the BNP Fortis Paribas bank in Brussels, on March 7, to denounce its investment in fossil fuels.

According to reports, hundreds of students gathered in Tel Aviv, against the Israeli government’s failure to cut emissions and switch to renewable energy sources.

Earlier, John Bachtell, national chair, Communist Party of USA told People’s Dispatch that the US withdrawal from the Paris Climate Accords was a severe mistake, especially at a moment when humanity is experiencing a planetary emergency, and the window for avoiding a climate catastrophe is closing. As the world’s largest polluter per person, the US has a vital role to play in the transition to a green economy on a global scale and must do it with urgency, he said. The majority of Americans understand increasingly, through their own experiences from extreme weather events, what is at stake and oppose Trump’s policies of promoting the coal and oil industries, he added.

According to reports, students from countries including Canada, Mexico, Panama, and Chile also participated in the climate strike

The Global Strike for Climate was initiated by students inspired by Greta Thunberg, a 15-year-old Swedish girl who demonstrated alone 30 weeks ago in front of the Swedish parliament, demanding concrete action to address climate change. She also spoke at the recent climate summit in Katowice, Poland.

Another day of action as part of the 2nd Global Strike For Climate is scheduled on May 24.