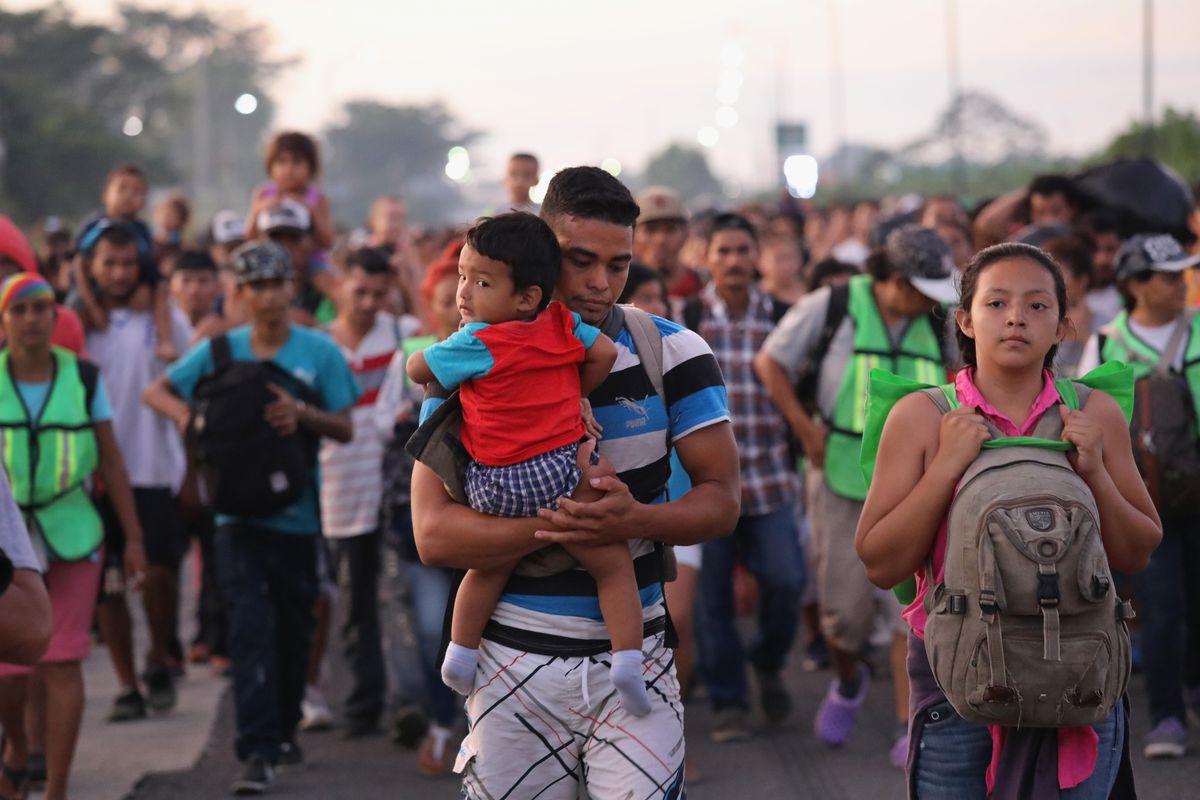 Members of a migrant caravan walk into the interior of Mexico after crossing the Guatemalan border on October 21, 2018, near Ciudad Hidalgo, Mexico. Photo: John Moore/Getty Images

Several news outlets have reported that the US has deployed an unknown number of troops to Guatemala, apparently in an attempt to prevent migration from the country. The move came after the country’s president, Jimmy Morales, signed a ‘memorandum of cooperation’ with acting US secretary of homeland security Kevin McAleenan last week, the contents of which have not been made public. The deployment of troops is the latest in the Trump administration’s harsh policies on migrants which has had a disastrous effect on the lives of thousands of people.

Since December 2018, six children (aged 6 to 16 years) have died in US detention centers. Five of the children were from Guatemala and one was from El Salvador.

The inhumane treatment of children has been a central point of criticism against the Trump administration’s policy against undocumented immigration. Trump had earlier announced a “zero tolerance” policy which included a family separation policy wherein children who were traveling to the border with their parents were separated from them in custody.

Trump’s twisted logic is to blame the parents for risking their children’s lives by bringing them along. This is the most brutal form of victim blaming. As per the policy, children are separated from their parents once they are arrested at the border and kept in separate detention centers administered by the US Department of Health and Human Services. Most of the detention centers, where both adult and child migrants are forced to spend weeks and months before they are deported back to their country, lack basic amenities, including food and water. The lack of fresh air, heating and hygiene adds to the misery of the detainees, particularly the children who often fall sick.

The family separation policy was supposedly implemented from April to June 2018 but immigration rights advocates have pointed out that it was occurring a year before its official announcement, official numbers point to somewhere around 3,000 children who were separated from their parents. And though government authorities announced that they put an end to the policy in June 2018, the practice continues today and hundreds of children remain separated from their parents.

The hell that faces migrants upon arriving to the US is only one part of their treacherous journey. Most of those who arrive at the border on foot have already walked for thousands of miles in the most difficult and dangerous terrains through the highlands or deserts of Mexico. Many have to sell all of their possessions in order to pay the high price of the journey which can vary from $6,000 to $12,000 with a ‘coyote’ (a smuggler) .

The central motivating factors for most who embark on the perilous journey are escaping violence, lack of opportunities and livelihood, and poverty. But how did conditions get so bad in these countries? Here we take a look at the historical context in Guatemala and the role of the US in creating the current situation.

President James Monroe’s 1832 dictates, known as ‘Monroe Doctrine’ was implemented to prevent any intra-imperialist rivalry in the region and ensure the undisputed and unchallenged presence of the US in the region. Before the rise of a brief period of populism in the 1940s, the ruling classes in Guatemala remained indifferent to the basic concerns of their own people and mainly adopted policies which served the interest of companies based in the US.

In the twentieth century, the Cuban revolution motivated a set of resistance movements across the region including Guatemala. These resistance movements demanded the fair distribution of resources such as land which had been expropriated during the long colonial period by a small ruling elite. The post-colonial state, mostly led by feudal elements in the military, created dictatorships supported by the US and used the state’s might to suppress these movements.

The influence of socialism during the Cold War made control over Central and Latin America essential for the US. The rise of any popular movement was seen antithetical to the interest of the US for the fear of them being influenced by the USSR or Cuba. The regimes in the region were hence encouraged by the US to use whatever means possible to control such uprisings.

Ruling classes used state and non-state actors to commit mass murder, illegal detentions, deportations and torture to suppress these popular movements. These movements were successful in capturing state power in countries, such as like Chile. However, the Americans, collaborating with existing feudal and military elites, sponsored coups against them. The result of these imperialist interventions were high levels of economic inequality and poverty amidst the islands of prosperity. The rich ruling elites used their power to further expropriate the resources, often in collaboration with American companies. In the neoliberal age, which came to Latin America a decade before the rest of the world, destruction of livelihoods for the mass of the population was complete.

Guatemala is one of the most important victims of this American strategy in the region. Following its independence from Spanish occupation in the 1820s, it was often ruled by conservative elites.The rise of the labor movement in the interwar period ultimately helped to bring the first populist regime in 1944-51 period. Juan Aros Arevalo’s (1944-51) government tried to implement land reforms and social welfare policies. However, his successor Jacobo Arbenz was deposed in 1954 by the Americans. The immediate reason was the insistence of the Arbenz government to take back the lands from United Fruit Company, a US plantation company in which John Foster Dulles, secretary of state, and his brother Allen Dulles, head of the CIA, had high stakes. Since Arbenz, authoritarian regimes continued to rule the country with the active US support.

Maya-mam indigenous communities, local people, deprived of their land during the colonial occupation, started a revolt against the colonizers in the 1960s.  The movement posed a great danger to the status quo and American interests in the country. The authoritarian regimes with active US support waged a war against the popular movement which went on between 1960 and 1996 and left more than 200,000 people dead as per the UN sponsored Commission for Historical Clarification report published in 1999. According to the report, the state was responsible for most of the deaths. The Americans trained the Green Berets of the Guatemalan army who were responsible for the disappearance and displacement of millions of people. Indigenous Mayans were the main victims of the war which still continues in the form of economic deprivation and rule of the gangs.

An example of such state oppression was the rule of General Efrain Rios who came to power in 1982 in a coup. This US-trained general was close to Ronald Reagan and a crucial tool in executing his policy against communism. In his less than two years of rule, Efrain Rios presided over several mass murders, displacements, rapes and tortures. In 2013, when he was already more than 85 years old, Rios was tried for his crimes. In the name of justice, this sham was performed with full pomp and glory. It was preceded by president Bill Clinton’s apology for the US role in the country in 1999. Despite the apology, successive US regimes have kept on treating Guatemala as their fief. Guatemala was forced to sign a free trade agreement in 2003, leading to economic war against the people.

The Obama administration promised a USD 1 billion as assistance to Guatemala to encourage the government to control the flow of migrants to the US. In 2014, the Guatemalan government enacted a legislation against coyotes, which mandated harsh punishment. This was approved by the US and Guatemala, in return, was granted $750 million in additional congressional aid. However, most of the money thus received was plundered. Corruption among the ruling elite is a widespread problem in the country. Jimmy Morales, the president of Guatemala, expelled UN’s International Commission Against Impunity in 2018 because it raised the issue of corruption in the regime.

The deployment of troops is the latest of such interventionist US policy in the region.

Even when Barack Obama was president, he attempted to take measures to control the flow of immigrants from central America, but his attempts were checked by a court order. With the arrival of Donald Trump to office in 2016, there has been a new and harsher approach towards these migrants. During his election campaign, lack of fresh job opportunities and stagnant wages were two main issues. Instead of creating new opportunities, the Trump administration has adopted a short-cut. Taking an ultra-nationalist stand (and a tired narrative), immigrants are blamed for taking away the existing jobs and driving down the wages for the American workers.

As a remedy, the administration has taken measures to limit immigration across the board. Trump wants to build USD 8 billion wall across the US-Mexico border to prevent such migration. This is being delayed by the Democrats in the Congress.  Meanwhile, Trump administration has increased patrolling on the border which has led to the capture and deportation of an unprecedented number of people since 2016.

The capitalist system in the US has always benefited from the constant flow of migrants from Central America. Migrants have provided the cheap labor to control the wage rates and maintain the rate of profit for corporations. Now Trump blames them for problems in the economy. Migrants are not the only target however. He blames Democrats for his failure to construct the wall, parents for the death of the children, states for not doing enough to prevent the migration to the US etc. His reluctance to acknowledge the American role in creating what he calls the “migration crisis” is typical imperialist arrogance where all the problems are attributed to someone else. The deep, structural problems in Guatemala and other Central American countries which are driving thousands to migrate will not be solved with militarization and repression.

The US suspends sanctions against Venezuela for COVID-19 related purchases 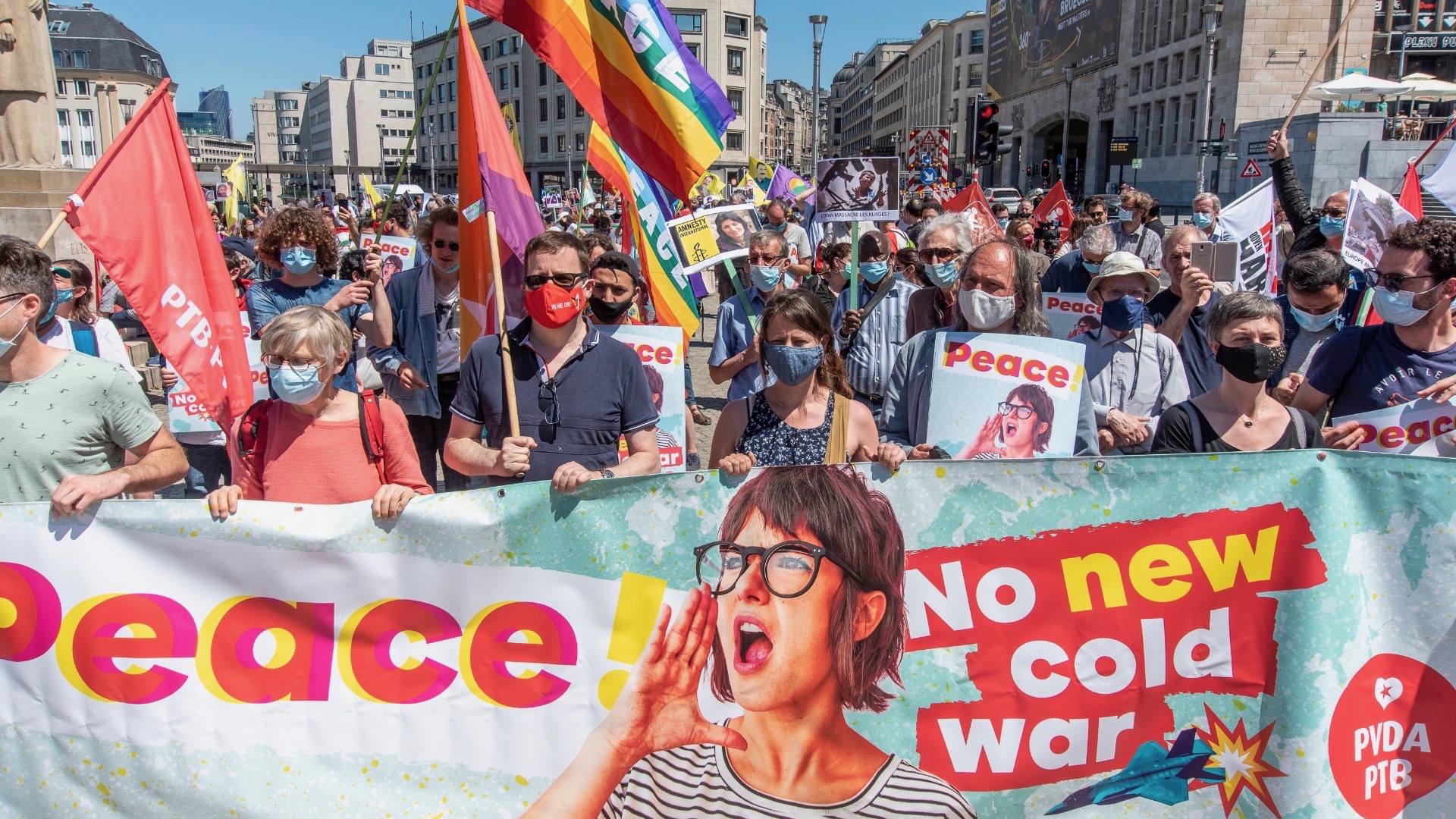 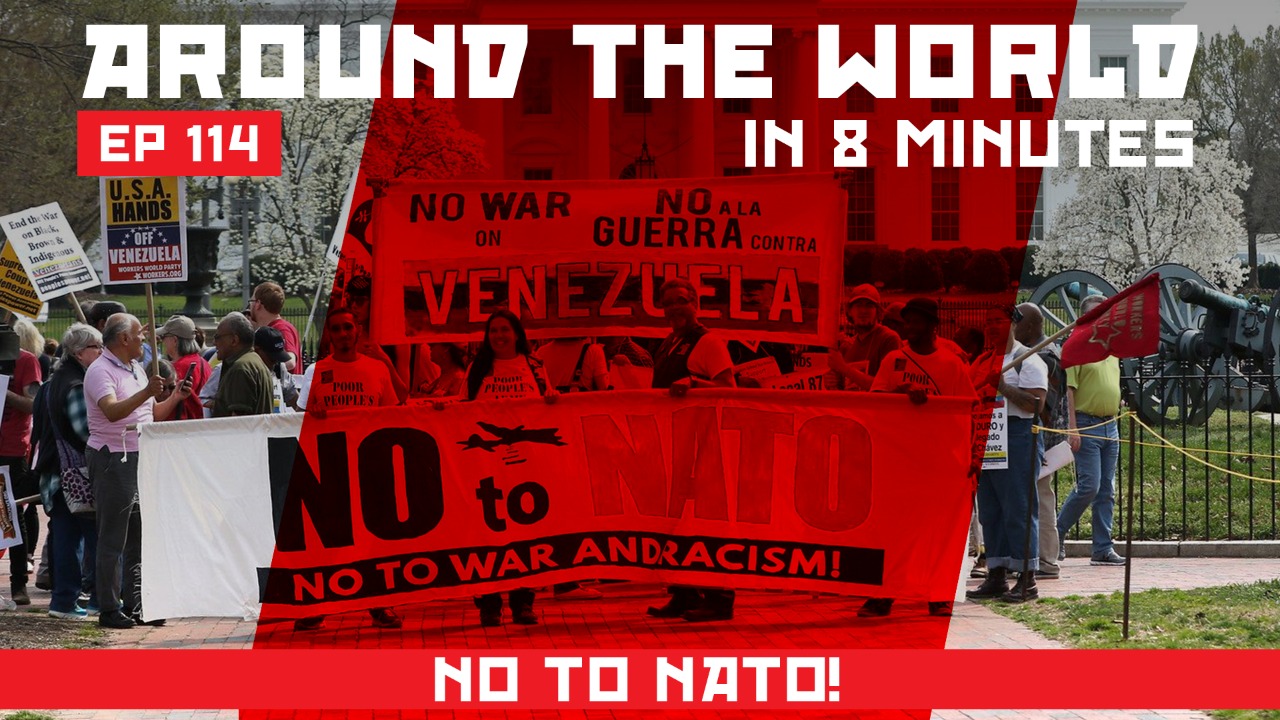 Around the World in 8 Minutes: People’s movements to mobilize against upcoming NATO Summit
RECENT ARTICLES