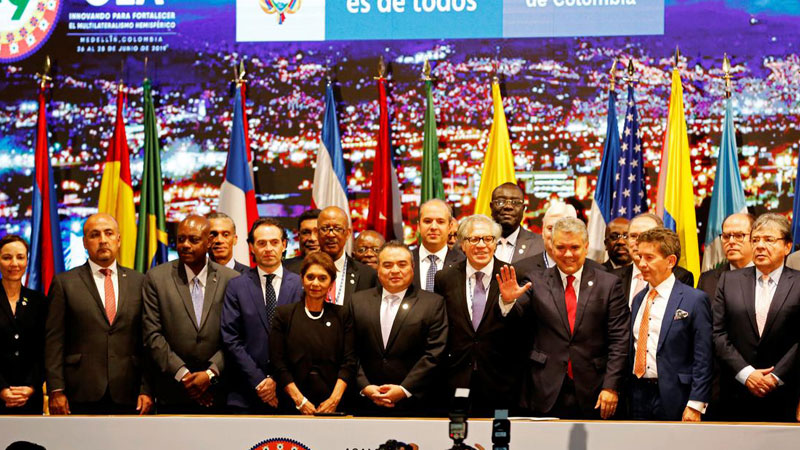 On Thursday June 27, Ariel Bergamino, the representative of Uruguay before the Organization of American States (OAS), walked out of the organization’s 49th General Assembly in protest against the presence and acceptance of the representatives of opposition leader Juan Guaidó. Mexico, Uruguay, Bolivia, Nicaragua, Suriname, Grenada, Antigua and Barbuda, Saint Vincent and the Grenadines, Dominica and Trinidad and Tobago, also denounced the presence of the Venezuela opposition.

The representatives of these countries stated that the presence of a delegation representing a country that withdrew from the OAS and that is not recognized by half of its members, lacks legitimacy and violates its legal norms.

Venezuela announced its withdrawal from the OAS in April, 2017, however, according to the organization’s norms, it was formalized this April. The country’s withdrawal from the organization was celebrated throughout Venezuela as the OAS is widely seen as a tool of the United States to further its agenda in the region. The statements supporting military intervention in the country by Luis Almagro, the Secretary General of the OAS and his support to the numerous coup attempts by the Venezuelan opposition was further reason to applaud the move.

The 49th OAS Assembly was largely focused on Venezuela and “restoring democracy” in the oil-rich country. In the opening of the Assembly, President Ivan Duque of the host country Colombia called on participants to help defeat the “dictatorship” in Venezuela.

Borges, declared “Ending the Maduro regime would not only reestablish freedom in our country but it would have consequences for the freedom of Cuba and Nicaragua. And it would end any temptation of whoever wants to turn into dictators in the future. This change is only comparable to what Europe went through 30 years. As such we can affirm that the end of maduro is the fall of the Berlin wall for Latin America. In the name of millions of suffering Venezuelans I can say that the moment of America has arrived.”

Interestingly enough, despite taking place in Colombia, little attention was paid to the crisis facing the peace process or the genocide of social leaders and human rights defenders.

Colombian social movements and organizations also met in Medellín to carry out a parallel summit. In meetings and mobilizations, the participating organizations shed awareness on the current situation facing the country and reaffirmed their rejection to US imperialism in the continent. They manifested their support behind the projects of integration within Latin America, a project which the US and the OAS have been desperate to thwart. Symbolic protests were held to pay homage to the social leaders who have been assassinated in the country and to raise awareness of the threat they face. More than 700 social leaders have been assassinated since 2016.

Evo Morales, the president of Bolivia, also criticized the OAS for focusing and debating too much on Venezuela, a country that is no longer a member of the organization. “Venezuela is no longer a part of the OAS and should not be the focus of its debates. At present, more than anything else, the organization needs to focus on urgent issues that are of high regional interest, such as the serious crisis of migrants who try to reach the US and die on the way,” he tweeted.

Since February, Bolivia, Mexico and Uruguay have been making continuous efforts to push for negotiations and dialogue between the democratically elected government of Venezuela and the opposition in order to solve the conflict for the betterment of Venezuela, its people and its future.

The Social Movements of ALBA also condemned the meeting of the OAS in Colombia. “In a complex political moment where Mesoamerica burns; there is deep migration crisis and tensions on the U.S.-Mexico border; upcoming elections in key countries such as Bolivia and Argentina; scandal after scandal by the lackey Bolsonaro, while Brazil demands freedom for Lula; the sustained attacks on Venezuela and Cuba; all while Duque’s government seems to legitimize the murders of social leaders as the tool to plunge the country into chaos and definitively deny any possibility of peace with social justice. This meeting of the OAS in Colombia will be another moment of deepening the interventionist strategy of the United States throughout Latin America and the Caribbean, and a space to issue orders to the bootlicker and servile governments who betray their people to bend to the interests of the empire. From Social Movements of ALBA we condemn this servile association,” said ALBA in an official statement.