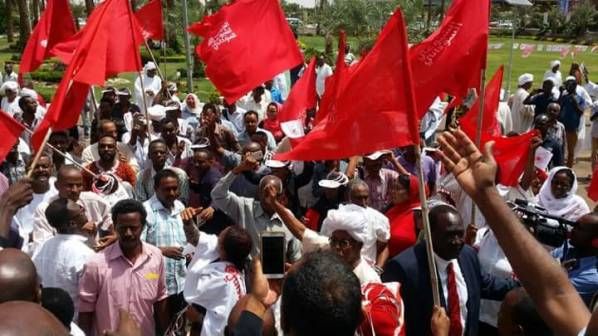 Members of the Sudanese Communist Party at a rally. Image for representational purposes.

In the aftermath of a meeting between the protest movement’s leaders and the military junta yesterday, the Sudanese Communist Party (SCP) announced today that it will not be participating in the transitional government.

Tha party has argued that this government, if formed in accordance with the proposals made by the Transitional Military Council (TMC), will “neither meet the aspiration nor the achievement of the goals of the revolution.” Instead, the party has “called for a continuation of the mass actions” until the military junta is forced to make way for a genuine civilian rule.

Yesterday, at the meeting with the Declaration of Freedom and Change Forces (DFCF), the Transitional Military Council (TMC) withdrew from some points it had agreed to before, and introduced caveats to others. The DFCF is an alliance of political parties (including the SCP) and unions which represent the protest movement.

Both the DFCF and the Sudan Call – another opposition alliance which includes the armed rebel groups who are engaged in a civil war with the state – have rejected these proposals made by the junta in form of a political declaration and a constitutional declaration, a source in the DFCF told Peoples Dispatch.

One of these tasks is the realignment of Sudan’s foreign policy in a manner which benefits the majority of its people, rather than the military elite. This will be rendered impossible because the two declarations proposed by the TMC approve and legitimize all the agreements the ousted regime of Omar al-Bashir made by with foreign powers.

The SCP raised concerns about the inability of such a transitional government to withdraw Sudan’s troops from the Saudi-led and US-backed war on Yemen, to withdraw from the agreements it had reached with AFRICOM and to remove the CIA bases from the country. “All of which”, SCP said, “are clear violation of Sudan’s sovereignty.”

The agreement reached on July 5 included the formation of legislative council, 67% of whose members will be appointed by the DFCF, with the remaining 33% to go to other political parties excluding those that were a part of the regime led by al-Bashir. At the meeting, the TMC refused to allow for the immediate establishment of this body.

Another part of the agreement from which the TMC withdrew is the establishment of a committee chosen by the DFCF-appointed council of ministers, which will, working under the supervision of the African Union (AU), investigate the crimes of Rapid Support Forces (RSF).

It was this notorious militia – led the vice-president of the TMC – which killed over 120 protesters, raped dozens and injured around 700 people on June 3.

This agreement, when read with the declarations made by the TMC, will keep “in tact the interests of the parasitic factions,the repressive organs of the state and militias including the” RSF, the SCP pointed out, adding that “rather than provide the framework for dismantling of the dictatorial and deep state, it preserves it.”

Also, the sovereignty council or the presidential council, which will be headed by the country’s president who will be a military officer appointed by the TMC for the first 21 of the 39 month-long transition period, will be accorded the power to “appoint the head of the judiciary,the general prosecutor as well as other top state posts”. This will provide “the TMC with protection against any future prosecution.”

Citing these reasons, the SCP has announced that it will not be participating in the transitional government, even if it formed in case the other parties go along with TMC.