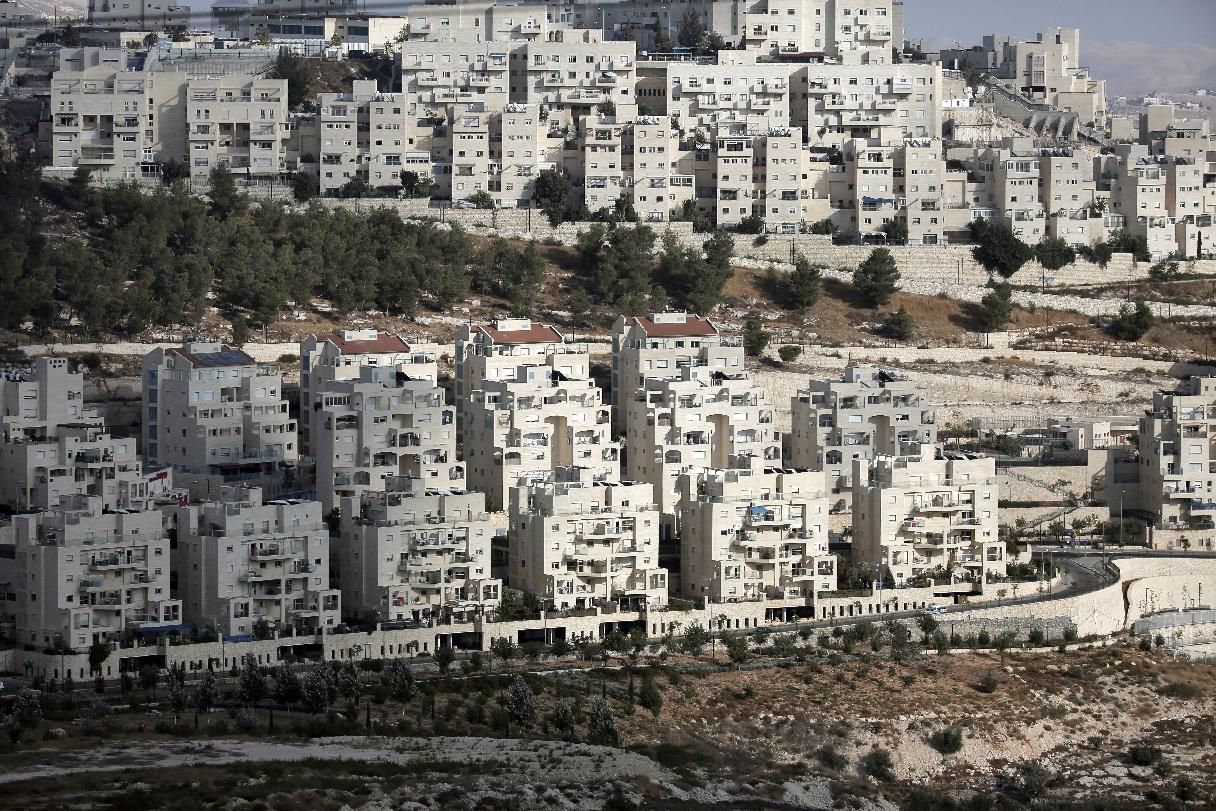 The Israeli settlement of Har Homa, built in East Jerusalem. Today, Palestinians are not allowed to build new houses within the old city. However, Jews can buy land and settle there. Photo: AFP Photo/Ahmad Gharabli

This is the first of two articles about Israeli settlements inside the occupied Palestinian territories.

Silwan is predominantly a Palestinian locality in occupied East Jerusalem. However, the Israeli state and Zionist organizations, such as the Jewish National Fund and the Elad foundation, are working to change its demography in more than one way. Since its occupation and annexation in 1967, East Jerusalem has already seen several such changes that have fundamentally altered the life of its residents and the nature of the city.

From the arbitrary use of laws, such as the Absentee Property Law of 1950, and other legal regimes to the use of force and intimidation, the Zionists have used all manner of tricks to end any possibility of a two-state solution. The legal regimes are created to harass the Palestinians and facilitate the establishment of Jewish settlements inside the city.

The Elad Association, one of the Zionist organizations engaged in creating “facts on the ground”, owns most of the Jewish properties in Silwan. On July 10, it was handed over yet another house of a Palestinian family named Siyam after they were forcefully evicted following decades of litigation. The foundation, which has an abundance of financial resources at its disposal, as well as legal and state support, has an elaborate method to execute the plan to Judaize the city. It initiates legal procedures against a family and pressurizes the members to sell the land, using a law according to which if more than 75% of the family members agree to sell the land, it can forcefully evict the 25%. The legal cases sometimes drag on for years, forcing the resource-starved Palestinians to sell their land and leave. Those who do not do this might not get even the minimum financial compensation, as in the case of the Siyam family. The last family member who refused to sell the land was forced to pay a fine to the Elad foundation instead of getting any compensation for the house.

The Judaization of occupied East Jerusalem has been a long-term plan of the Zionist state of Israel. Silwan is a perfect example of this. Zionist groups have already declared Wadi Hilweh, a part of the Silwan locality, as “City of David” after the biblical king David’s “original city of Jerusalem” and want to remove families that have been living there for centuries. Although there is no clarity regarding archaeological evidence about the mythical city, Israeli officials have already started digging through the city to find traces of the second temple era.

The Israeli state, along with the Jewish National Fund and the Elad foundation, started excavating a tunnel under the densely-populated Palestinian localities in the occupied East Jerusalem in the year 2000. The objective was to find evidence of Jewish history. The result of one of such excavations is the newly-inaugurated “Path of the Pilgrims” tunnel that runs from Wadi Hilweh to the Western Wall. The City of David Foundation, a Zionist organization, argues that the tunnel is 2,000 years old. It was supposedly buried under the houses for centuries and was accidentally discovered in 2004 during a sewage pipe repair work.

Such excavations are carried out irrespective of their archaeological and historical value, displacing or threatening people in the locality. Experts argue that most of these excavations are done horizontally, which has no archaeological value. The evidence is rare and does not live up to the hype generated around it. Nevertheless, it provides a perfect excuse to displace a large number of Palestinians.

Palestinians in East Jerusalem face constant destruction of their houses and commercial establishments by the Israeli authorities. Existing historical monuments from the Arab era, including the al-Aqsa compound, face constant threats of destruction and desecration. In May, a large number of Zionists gathered under the banner of “Third Temple Movement” and tried to storm into the al-Aqsa compound, preventing Palestinians from praying there. They also demanded the right to pray inside the mosque compound. In 2000, such attempts by Zionist groups received a real boost due to the visit of Ariel Sharon, the then prime minister of Israel, inside the mosque compound. The resistance by Palestinians, called the Second Intifada, had stopped such movements for a while. In the recent years, it has begun again.

Since the history of the region is a syncretic one, a large number of monuments belonging to the long Arab period are discovered during such excavations. However, the Zionist project either ignores all such structures or changes their forms. For example, a large bath house from the Mamluk period has been converted to an exhibition center for Jewish remnants. This is a purge of history.

The attempt behind such purges is to erase traces of Arab culture and history, and create a new, more Jewish image of the city. This process of Judaization, as Edward Said termed it, of creating facts on the ground is nothing new. Zionists have been doing this for decades now. The biggest and earliest experiment of such Judaization was seen during the 1948 war or Nakba when millions of Palestinians were en masse forced out by the Israelis from the cities and villages of today’s mainland Israel. They are repeating the same process in a slow but systematic manner. The idea is to make the two-state solution impossible and legitimize the Israeli claim over all of East Jerusalem and the West Bank.

David Friedman, the US Ambassador to Israel, and Jason Greenblatt, the US special representative for international negotiations, were present at the ceremony to inaugurate the “Path of the Pilgrims” on June 30. When asked, Greenblatt denied that he was legitimizing the “Judaization of the city”. He said, “We can’t ‘Judaize’ what history/archaeology show. We can acknowledge it if you can stop pretending it isn’t true! Peace can only be built on truth.” This is the official Israeli line which Greenblatt parrots without hesitation. The Donald Trump administration has already given recognition to Israeli claims over occupied East Jerusalem, disregarding their earlier stand of supporting a two-state solution and East Jerusalem as the capital of the future Palestinian state. The United States provides imperialist protection to all the illegal activities of Israel inside the city.

Besides all this, there are the innumerable direct attacks on Palestinians’ livelihoods. They are threatened in different ways and deprived of basic facilities. Jews have settled within predominantly Arab localities and clear discriminatory regimes are observed with regard to basic amenities, security and other human rights. Palestinians are often denied these facilities whereas Jews are treated with utmost care.

According to B’Tselem, a human rights organization, the Jerusalem municipality runs only six family health centers and four social service centers in the Palestinian neighborhood, which comprises 40% of the city’s population. In the Jewish neighborhood, it runs 27 family health centers and 19 social service centers. More than 76% of the Palestinians live below the poverty line in the city.

The city has undergone unrecognizable changes since its occupation. The land and houses of most of the Palestinians who were “absent” at the time of occupation was confiscated after the annexation in 1967. The Israeli state also expropriated around 70,000 dunams (1 dunam is 1 square km approximately) of land from the West Bank and expanded the boundaries of the city. The state has since then expropriated around 25,000 dunams of this land belonging to Palestinians and has built 11 new settlements exclusively for the Jews. All these settlements are illegal as per the fourth Geneva Convention.

The remaining Palestinians were given a “permanent resident” status which made them second-class citizens without the right to vote in the national elections. Such a status is generally given to foreigners who choose to live in another country. However, Palestinians were residents of the occupied territories but had nowhere else to go unless they agreed to become refugees like the majority of their fellow countrymen.

Today, Palestinians are not allowed to build new houses within the old city. However, Jews can buy land and settle there. As per a law passed in 2003 in the Israeli parliament, Palestinians in East Jerusalem cannot live in East Jerusalem with a spouse from Gaza, the West Bank or from any other part of the world. Children born to such couples are also not given permanent residency inside East Jerusalem. But Jews from all over the world can come and settle anywhere in Israel, and in settlements inside the occupied territories, with full state protection and all the rights of a citizen.

The apartheid-like situation has led to the ghettoization of Palestinians inside East Jerusalem. According to B’Teslem, Palestinian localities are overcrowded. On an average, around 2 (1.9) persons live in every room in a Palestinian house in the city. For Jews, the figure is 1 person per room. Hundreds of houses belonging to Palestinians are demolished by Israeli authorities every year on the pretext that they were built without permits. However, the authorities usually take years to act on the applications filed by Palestinians for such permits, and in most of the cases, deny it.

Around 30% of the land in the extended Jerusalem is denoted as “scenic areas” where no construction is allowed. Only 15% of the land in the city is left for the 40% Palestinian population. Israel has declared a large part of the city area as national parks where no construction is allowed. There are four such national parks in the city that have nothing to do with conservation and are mostly located near the Palestinian localities. They are exclusively designed to expropriate more land from Palestinians.

Apart from preventing Palestinians from living freely and in a dignified manner, the occupiers have also tried to cut the city off from the rest of the Palestinian population in the West Bank. A large number of Palestinian residents in the West Bank are denied access to East Jerusalem through special check posts created around the town. There is a separation wall within East Jerusalem that was completed in 2016. The high wall cuts off Palestinian neighborhoods from the rest of the city, preventing most forms of business, family and cultural ties.