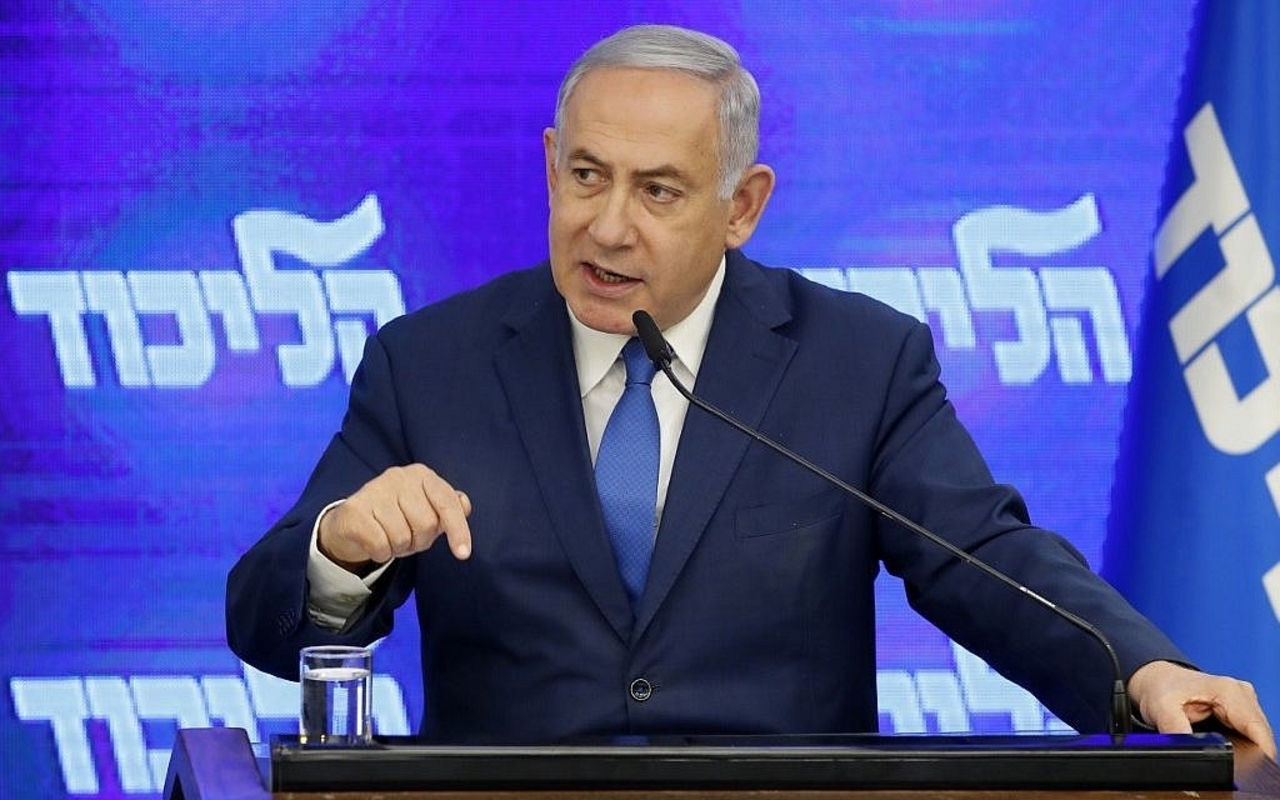 Netanyahu is pushing the right-wing discourse in Israeli politics even further yet remains the popular choice for the elections to be held on September 17. (Photo: AFP)

Those who expect the results of the September 17 elections in Israel to be substantially different from those of April may be in for a disappointment. All the leading polls so far have predicted a repeat of the previous results.

In the polls in April, Netanyahu’s Likud party was slightly ahead of former general Benny Gantz’s Blue and White alliance in terms of vote share although both parties got 35 seats each in the 120-seat Knesset as per Israel’s proportional representation system. However, Netanyahu was not able to form a coalition government as former defense minister Avigdor Lieberman refused to be part of the government on the issue of military service for ultra-orthodox Jews.

The September 17 polls may produce a similar result. It is also unclear if anyone will be able to form a government or whether the country will again go to the polls in January. Netanyahu has an advantage over the Blue and White Alliance as he may be the first choice for many of the smaller right-wing parties which may have a vital role in forming the government. What is clear is that irrespective of the results, Israel’s imperialist aggression is all set to continue with the aid of the United States. Netanyahu has already promised he will annex the Jordan Valley and the northern part of the Dead Sea and the Blue and White Alliance has a similar line on settlements.

The two leading coalitions – led by the Likud and Blue and White Alliance – are the same as April. However, some of smaller parties within them have seen significant realignment since then. Among the opposition groups, the Labour Party which contested the previous elections alone, winning only six seats in the Knesset, has elected Amir Peretz its leader and  has decided to make a joint list with the centrist Gesher party, despite the fact that both hold differing positions on Palestine.

Labour’s move towards the center in the last two decades has blurred the differences between the two on several social and economic issues. Nevertheless, the party is not expected to improve its performance. In fact, the alliance with Gesher has prompted one of  Labour’s popular faces, MK Stavv Shafir, to leave the party. He has since joined the Democratic Camp, a coalition between ex-Labour leader and former prime minister Ehud Barak and the Nitzan Horowitz-led Meretz which is perhaps the only credible left-wing party in Israel.

The Democratic Camp, along with the Arab-Israeli parties, may become the real opposition to whichever right-wing group is able to form governmen. The Arab-Israeli parties are expected to do well, retaining at least 10 seats in the 120-member Knesset. Unlike in April, they have come together again to form a joint list. If the voter turnout among the Arab minority is good, they are expected to repeat their best ever performance of 13 seats.

Ayman Odeh of Haddash, one of the constituents of the joint list, had appealed to the mainstream parties in Israel before the last elections, to consider the Arab parties for a place in the government coalition. It was a desperate appeal, given the fact that a large number of Arabs in Israel have begun to realize the futility of their right to vote. They know that their representatives cannot influence any decision taken by the Knesset. This has led to decreasing voting percentages among the Arab population.

Benjamin Netanyahu is still the most popular leader in the country and has been so for more than a decade. His popularity is a reflection of the hegemonic right-wing political discourse in the country, which he is contributing to on an almost daily basis. The promise to annex the Jordan Valley is only one prominent example. He has been consistently making hostile statements and ordering air and drone strikes on several countries in the region in order to appeal to the ultra-nationalist Israeli electorate. In brief, he is setting an agenda which no opposition party or alliance can ignore.

However, despite his overwhelming popularity, his party Likud is expected to win only around 30 seats in the Knesset. However, irrespective of whether he forms the government or not, the shift to the right will forever be associated with him.

The Blue and White alliance, according to some polls, may even win more seats than Likud. Its leaders have even talked about secularism and hinted at an agenda of equal rights for minorities. However, the lack of any concrete proposals make it seem like much of this talk is just lip service, as does the strategic silence maintained by the Alliance’s leaders during the last election. During the last campaign, Benny Gantz publicly denied the possibility of any post-election understanding with the Arab-Israeli parties after Netanyahu alleged that the opposition was exploring such a possibility. In all likelihood, even if Netanyahu fails to forms the government, Gantz will prefer right-wing parties from Likud’s camp to join his coalition, instead of inviting Arab parties to form the government.

None from the opposition (excluding the Meretz and Arab parties) have dared to criticise the Nation-State Law passed last year that relegates Arab minorities to second-class citizens. The only party which has defied Netanyahu on the issue of religion is a long-term ally, the Yisrael Beitenu that is led by ultra-right leader Avigdor Lieberman. However, the battle here is over a different version of secularism, based on the party’s communal voter base of Russian Jews.

Lieberman may be able to dictate terms to Netanyahu in case Likud and the broad right-wing alliance is unable to secure a majority again. His refusal to support the exemption from conscription for Haredi Jews, as proposed by Netanyahu, is commonly cited as the reason for the September elections. It is being speculated that there will be no government until Liberman extends support to the alliance.

As none of the coalitions and parties have offered any serious alternative to Netanyahu’s policies, the focus on corruption charges against him is the only major issue in this election.

The Blue and White alliance is headed by an ex-military general (Benny Gantz) and an ex-colleague of Netanyahu (Yair Lapid). Both of them have “proudly served” under him and have no real criticisms of his policies on Palestine, the Arab world or the world in general. They have no credible criticism of his economic policies either.

Netanyahu’s pro-rich and neo-liberal socio-economic programs, his use of brutal oppression on Palestinians or the alignment with ultra-conservative parties such as Zehut are not issues over which Gantz and Lapid parted ways with Likud. On the contrary, they joined the opposition, claiming that Netanyahu was “soft” on Palestinians. Gantz, reportedly, takes pride in bombing Gaza to the “stone age” under Netanyahu’s orders.

Meanwhile, Likud has tried to move further on the right by announcing its alliance with Zehut, led by Moshe Feiglin. Feiglin has talked about the repeal of the Oslo Accords and the annexation of all occupied territories. He advocates the expulsion of all those who support Palestine, while granting resident status to only those Palestinians who are “loyal” to Israel. Zehut is a libertarian party when it comes to economic policies, advocating the privatization of education and health care. Being ultra-right wing, it has proposed the handing over of Temple Mount or the Dome of the Rock to the rabbis. The party is also in favor of citizens’ right to carry arms.

Another possible ally of Likud, the Rightward or Yamima party, is led by Ayelet Shaked and Neftali Bennet. They have served in Netanyahu’s government earlier, with Shaked proudly making anti-Palestinian pronouncements during her stint as justice minister. Their sole agenda is to strengthen the right-wing politics in the country.

The election is a reflection of the fact that Israeli politics, at least in the last two decades, has turned into a race among right-wing parties, each competing to be more conservative, hawkish and neo-liberal.

Despite the tags of left, right and center, barring smaller parties, most others do not display any significant ideological differences. All of them, perhaps with the exception of the Arab parties and Meretz (a part of Democratic Camp), have similar opinions on the major issues in Israeli politics – the question of Palestine and the social and economic program in the country.

Due to the hegemony of the right-wing discourse in the country, none of the main parties, including Labour, talks about an alternative social-democratic program. This is despite the fact that Israel has a very high poverty rate of  21%, with even higher socio-political inequality between different communities. The last 20 years of neo-liberal economic policies have created prosperity only for particular sections of the Israeli population, leading to grave social inequalities.

Today, the majority of the parties in Israel are opposed to Palestinian statehood in one way or the other. Apart from the Arab joint list and the Meretz-led Democratic Camp, both marginal forces in the election, all major parties or alliances speak the language of occupation and annexation of the occupied territories.

The absence of any real alternatives in Israeli politics is the sign of a larger hopelessness among the progressive constituencies in the country. It reveals structural problems within Israel’s political institutions, wherein the monied classes, playing comprador to global imperialist forces, create a narrative around a “siege mentality” to justify Israel’s occupation and the treatment of its minorities as second class citizens. For this reason, all of Israel’s claims to democracy become questionable. The dominance of the right-wing in Israeli politics has led to a further erosion of legitimacy.