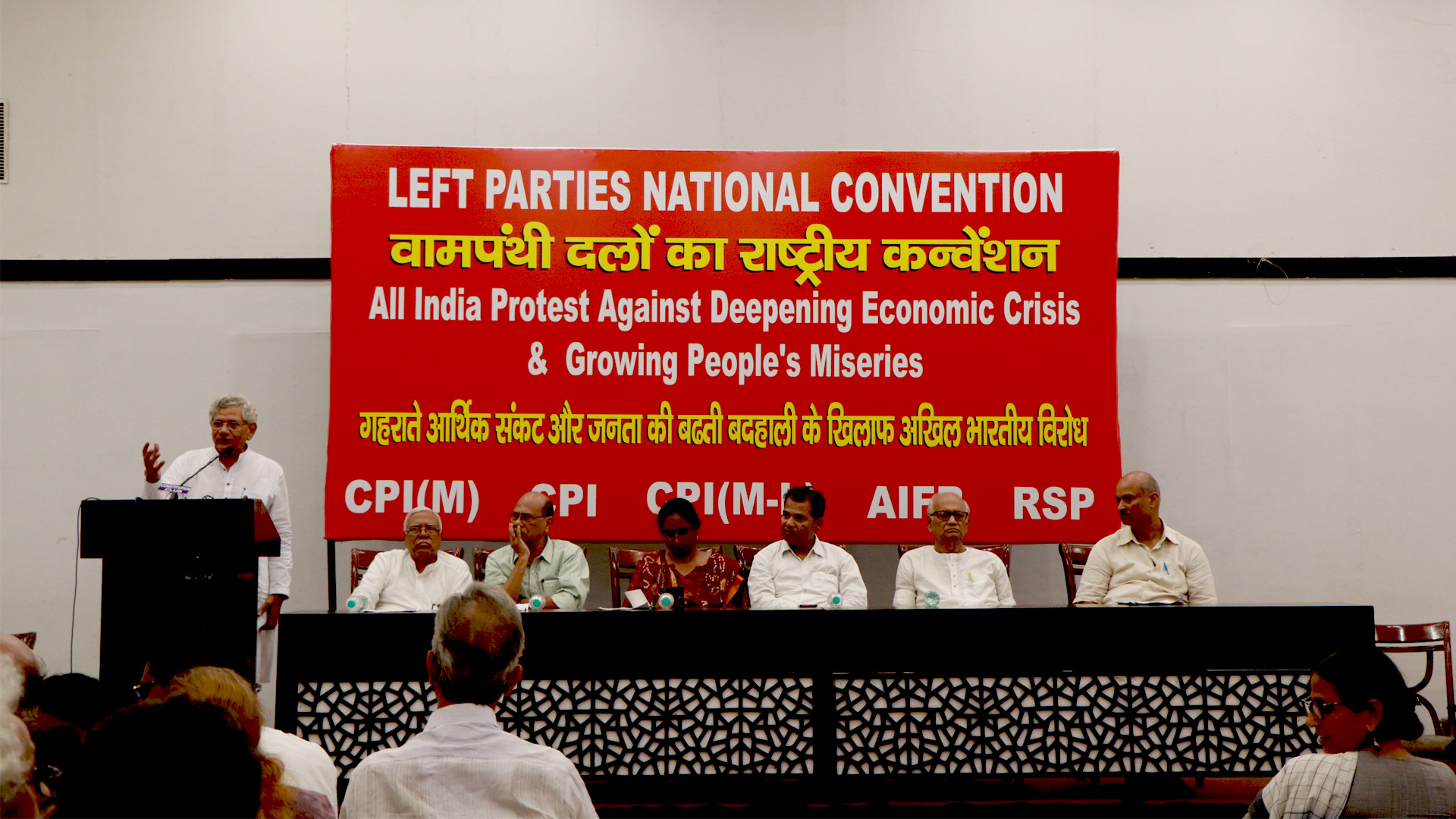 Speaking at the convention, Sitaram Yechury, general secretary of CPI(M), said “The government is sleeping as people suffer. In Bhagat Singh’s [Indian revolutionary] words, it needs a bang to wake up from its slumber. And for this, all the left parties will organize a week-long agitation from October 10 to 16 against the economic crisis, which is caused by the government’s neoliberal and anti-people policies.”

The resolution of the convention noted that all existing evidence, including the doctored official data, confirms that almost all sectors of the economy are collapsing. This slowdown has led to unprecedented job losses, with women being the worst victims.

According Indian government’s own data, released by the Reserve Bank of India (RBI), the gross domestic product (GDP) growth rate of the economy has slipped to 5% in the first quarter of financial year 2020, the lowest in over six years. This slump in GDP has happened even as the far-right government of Narendra Modi has been accused of fudging economic parameters and boosting the GDP numbers.

“The reckless privatization of public sector companies by the Modi government has not only destroyed our economy but led to massive job losses,” said D. Raja, general secretary of the CPI, criticizing the rampant neoliberal economic policies initiated by the government. The government has accelerated privatization of various public sector companies, which includes the ordinance factory, railways, the thermal power corporation and Air India among others.

The high number of corporate loan defaulters or what is known in banking lexicon as non-performing assets (NPAs), has led to immense stress on banks. Rather than cracking down on corporations responsible for these NPAs, the Indian government has been recapitalizing the banks by borrowing money from the RBI. Recently, after a long conflict between the government and the RBI, the latter finally gave away 1.76 trillion Indian rupees (24.7 billion USD) out of its Contingency Risk Buffer funds. The buffers funds are kept with RBI to be used in case of any emergency or contingency.

This decision was termed as ‘catastrophic’ by the opposition parties. “The government’s demonetisation move [banning of Indian currency notes in 2016] took away money from people. And today’s economic crisis is because people don’t have money to buy, they don’t have purchasing power,” noted Dipankar Bhattacharya, general secretary of CPIML.

“The privatization and demonetization has led to the people’s money being robbed by the government and today, the economic slowdown from auto sector to even small industries like biscuit factories is the reflection of that,” Dipankar added.

Debabrata Biswas, general secretary of AIFB and  Kshiti Goswami, general secretary of RSP pointed out that despite the immense misery faced by the people, the government is more bothered about “helping its corporate friends”. Last week, the government slashed the corporate tax to 15%, which it claims will make India an investor-friendly destination.

The communist parties unanimously noted that the only way to save the country from the ongoing economic slowdown is to strengthen the working class and its purchasing power. The convention demanded that the money taken from the RBI should be injected into programs like  Mahatma Gandhi National Rural Employment Guarantee Act (MGNREGA), which provides 100 days of work. They also demanded that fund allocation for MGNREGA must be enhanced to ensure the payment of past dues and for providing a minimum of 200 days of work at the designated minimum wage. The convention called for the increase of minimum wage across the country to 18,000 rupees per month (252.82 USD).

In the final resolution of the convention calling for the October protest, the communist parties also demanded increased public investment to generate employment. They demanded that until then, the central government must provide unemployment allowance to the youth, and ensure the provision of monthly living wages for the large number of workers who have lost their jobs [due to economic slowdown].

Regarding the neoliberal policies of the government, the convention demanded an end to the privatization of the public sector, withdrawal of 100% Foreign Direct Investment (FDI) in defense and coal sectors, and halting the large scale privatization of telecom company (BSNL), ordnance factories, Indian Railways and Air India among others.

The convention also called for a one-time loan waiver to the farmers to meet agrarian distress and prevent farmer suicides. It also called for the announcement and implementation of a minimum support price that is one-and-a-half times higher than farming input costs. It also demanded a raise minimum monthly old age/widow pension to Rs. 3000 rupees a month (42.14 USD).