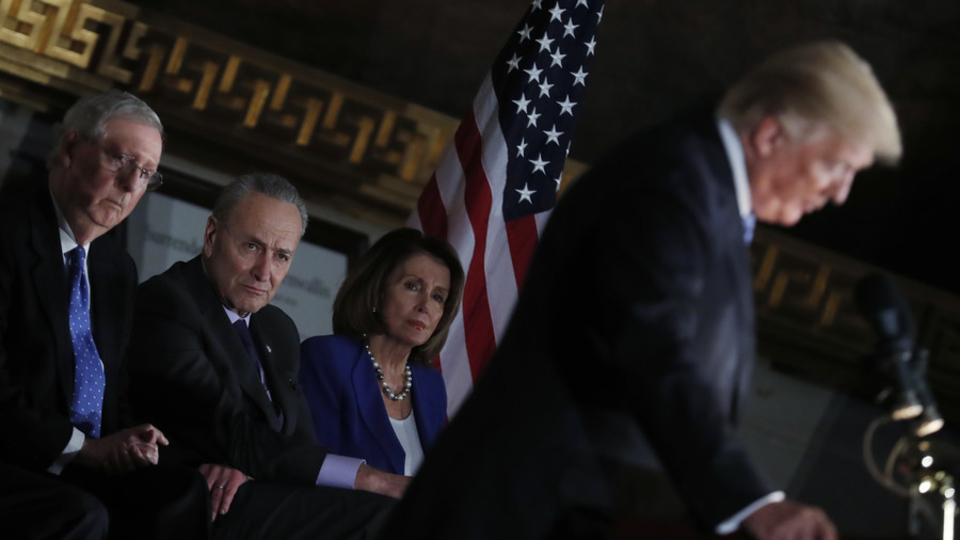 Speaker of the House of Representative in the US Congress, Nancy Pelosi has announced an inquiry to impeach US president Donald Trump on September 24. (Photo: Reuters)

The controversy over impeachment proceedings against US president Donald Trump deepened on September 25 as he released a transcript, reportedly of his conversation with Ukrainian president Volodymyer Zelenskiy. The conversation was the subject of a probe announced by Nancy Pelosi, the speaker of the US House of Representatives. The inquiry is based on a complaint against the president by a whistleblower, who alleged that Trump tried to persuade Zelenskiy to open an investigation against Joe Biden, the Democratic front-runner for 2020 presidential elections, which would include his son as well. Trump has been accused of a “quid pro quo”, wherein he withheld USD 400 million in aid to Ukraine, to create pressure on the country’s government.

In the transcript, which is not believed to be verbatim, Trump asks Zelenskiy to look into the matter of Biden and also work closely with his personal lawyer, former New York mayor, Rudy Giuliani. Trump has long been alleging that Joe Biden, who was the vice-president during Obama’s administration, used his position to stop an inquiry against his son in Ukraine.

Many Democrats were quick to claim that the transcript was the “smoking gun” needed to prove Trump’s guilt.

While admitting that he had withheld the financial aid to Ukraine, Trump has denied using his position to attempt to influence the Ukrainian president to open an investigation against Biden’s son.

The inquiry announced by Pelosi is intended to establish if Trump is complicit in inviting foreign interference into the US election. According to her, Trump’s actions have not only endangered national security, but also violated the US constitution.

Pelosi had resisted the calls for impeachment for long, ever since the the Mueller report on Russian involvement in the 2016 elections was released. However, after a closed-door meeting with her party colleagues on Tuesday, she said that “the president must be held accountable. No one is above the law”.

Trump referred to the impeachment announcement as “witch-hunt garbage” and “presidential harassment” by the Democrats. He has also ordered the release of the transcripts of his conversation with Zelenskiy.

The Process of Impeachment

The inquiry to impeach the president will be conducted by the House Judiciary Committee after a probable vote in the House, where a simple majority is sufficient to formally bring charges against Trump. Once the resolution, or the ‘Articles of Impeachment’ as it is officially known, is passed by the House, it will be transferred to the Senate, where the Chief Justice of the Supreme Court presides over the proceedings, with Senate members acting as jury and the House as prosecutor. At the end of the proceedings, if the Senate passes the resolution with a two-thirds majority, the president stands impeached.

Neither of the two previous impeachment proceedings against former US presidents have been successful. The first one, against Andrew Johnson in 1868, and the second against Bill Clinton in 1998, both, failed to pass in the Senate. In another instance, Richard Nixon had resigned from his post before the impeachment resolution was brought to the House in 1974.

Meanwhile, in the current US Congress, the Democrats hold a majority in the House of Representatives, where the impeachment process begins. Out of the 435 members, 235 belong to the Democratic party, whereas Republicans have only 199 members. However, in the upper house or the Senate, the Republicans have 53 seats against 45 of the Democrats and 2 Independents. Even if all the Democrats and Independents vote together, which they usually do, the impeachment motion will not be accepted until at least 20 Republicans also vote along with them. Under the given circumstances, this seems like an impossible scenario.

Though impeachment is a legitimate process for the removal of the president, who is otherwise all-powerful and cannot be removed from the post in any other way, it is rarely invoked because of the political risks involved. The chances of it backfiring, particularly in an election year are usually very high, as the electorate may presume that the move is an overreach by the opposition. In 1998, the Republicans lost the congressional election after they instigated impeachment procedures against the then-president Bill Clinton. Generally, the move is considered politically risky as it can polarize voters in favor of the incumbent president.

The Democrats have accused Trump on several counts in the past, as well. He has been accused of seeking Russian help during the 2016 elections.

The current campaign carries the risk of consolidating the voters strongly behind Trump. The Democrats may be accused of ignoring real issues, while overplaying the role of external influences, triggering a reaction from the electorate that backs Trump.

These recent allegations have already made Trump stronger, with support for him from within the Republican party growing in recent times.

The initial impact of the announcement could be seen by the fact that the Trump campaign raised close to a quarter of a million dollars within a few minutes of the announcement of the inquiry. There are reports in the media, claiming that there is very little popular support for the  impeachment among the common people.

According to a report by the Guardian, though Pelosi moved the impeachment process only after being pressured by Democratic party members, the move is not supported by all within the party. Democrat Congressman Jeff Van Drew of New Jersey has claimed that the “majority of Americans at this point of time do not want to see this [impeachment],” the Guardian reported.