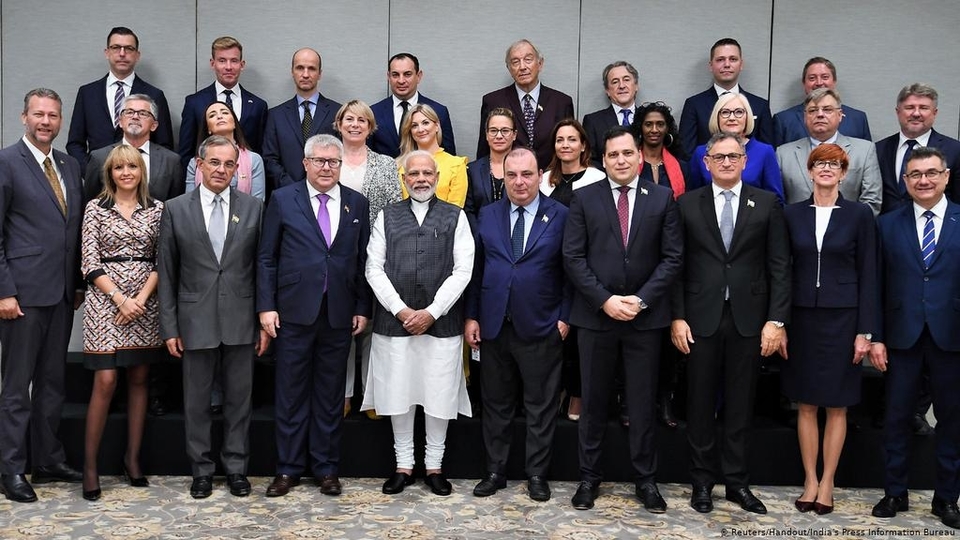 The MEPs come from parties including the Vox in Spain, the AfD in Germany and the National Rally in France.

Protests broke out at several places in Kashmir on October 29, Tuesday, after the announcement of the visit of a 23-member delegation of politicians from the European Union. The delegation mostly comprises Members of European Parliament (MEPs) belonging to ultra-right-wing parties with established records of Islamophobia and anti-migrant campaigns.

The permission given by the far-right Narendra Modi government of India to the delegation is largely seen as an attempt to placate the growing international criticism of its policies related to Kashmir and use these far-right wing MEPs to whitewash its record. However, a global backlash against the visit has put the Indian government on the backfoot. Indian media organizations have exposed both the composition of the delegation, and the shady nature of the organization which invited them.

The Narendra Modi-led far-right-wing government abrogated article 370, the constitutional provision granting special status to the State of Jammu and Kashmir, on August 5. It also abolished the status of full Statehood for Jammu and Kashmir. It has since divided the State into two union territories and imposed heavy restrictions on the common people, violating their basic rights. A harsh communications shutdown is in place and political leaders remain in jail.

The Indian government has so far maintained that Kashmir is an internal issue and has lashed out against any criticism. It denied US congressman Chris Van Hollen entry into Kashmir earlier this month. It has also prevented UN special rapporteurs at the Human Rights Council and many foreign journalists from visiting the State since August 5.

What differentiates the MEP delegation is its composition. The delegation, which met prime minister Modi and national security advisor Ajit Doval on October 28 before going to Kashmir, comprises ultra-right-wing politicians and MEPs, exposing the selective approach of the government. It raises doubts about the real intentions behind this sudden change in policy.

Some of the original invitees from the current delegation reportedly withdrew at the last moment. The disagreements over the brief given by the government is reported to be the reason.

Except for two members, Guiseppe Ferrnandina of Italy’s Democratic Party and Bill Newton Dunn of the UK’s Liberal Democratic Party, all the others belong to right wing or ultra-right-wing parties in different countries in Europe. For example, all six delegates from France belong to Marine Le Pen’s National Rally. National Rally has campaigned against migrants and it equates Muslim immigration with Islamic terrorism.

One delegate each from Spain (VOX party) and Italy (Lega Nord) belong to parties which also support discrimination against migrants. They oppose immigration from predominantly Muslim countries but are open to inviting immigrants from non-Muslim countries. This stance is very much similar to the ruling Modi’s Bharatiya Janata Party which has proposed a bill in parliament to grant citizenship to all non-Muslim migrants from south Asian countries.

Six delegates from Poland belong to Law and Justice Party which is openly Islamophobic, homophobic and opposed to abortion.

Four of the five delegates from the UK belong to Brexit Party and two German delegates are far-right Alternative for Germany party (AfD). A majority of the 23 delegates thus belong to parties which adhere to ideologies which can be generally described as fundamentalist-Islamophobic.

The government in India has been deliberately overlooking the grievances of the common people and blaming Pakistan for all the unrest and resistance in the state. One of the world’s most militarized regions saw a surge in the number of military persons deployed after the August 5 decision.  The visit takes place even as the government of India is in complete denial regarding the human rights violations taking place in Kashmir. Instead, it has sought to create a narrative painting a rosy picture. The invitation to the current delegation is a move to legitimize that narrative.

In the 86 days since the crackdown, leaders of most Indian political parties have not been allowed to visit Kashmir. Normal life in the valley has been thrown out of gear with the functioning of schools and colleges and commercial activities completely paralyzed.

Meanwhile, the European Union has issued a statement and claimed that the delegation has no official sanction and members are visiting India in their personal capacity. It also said that the politicians were invited by a non-government group in India.

These 23 politicians have plans to meet government officials and residents in Kashmir. However, their interlocutors have been carefully chosen. The president of Kashmir Chamber of Commerce and Industries (KCCI) Sheikh Ashiq told Newsclick that this was the first time that any international delegation visiting Kashmir was not meeting them.

“Whenever any delegation arrived in Kashmir, KCCI has been given the first appointment except this time however, [after] we have already made our position clear vis-a-vis the situation on the ground,” Ashiq said.

Most of the opposition parties, including the Indian National Congress and Communist parties, have criticized the government’s move to allow the MEPs to visit Kashmir. The Communist Party of India (Marxist) said in a statement, “It is an affront of the Indian Parliament and its sovereignty, that while Indian MPs and political leadership of national parties are denied the freedom of visit the valley, reportedly some “private visit” by foreign Parliament Members is being allowed.” It called for the removal of all restrictions on the people of Kashmir and demanded that ”the government takes urgent steps to stop all repressive measures and restore the democratic rights of the people.”