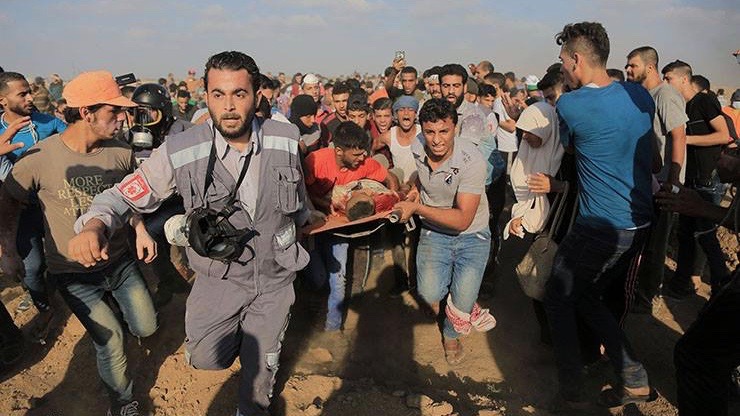 Othman Hilles, a 14-year-old Palestinian child was killed by the Israeli army during a protest along the Gaza fence, east of Gaza City. Photo: Mohammed Zanoun/Activestills.org

In a egregious miscarriage of justice, an Israeli Defense Forces (IDF) soldier, convicted of killing an unarmed Palestinian boy during the weekly Great March of Return protests on the Gaza-Israel border, was sentenced by an Israeli military court on Monday to only one month’s community service as punishment.

The soldier has also been placed under probation and demoted from his military rank. The conviction and punishment are part of a plea deal in which the soldier pleaded guilty to “disobeying an order leading to a threat to life or health.” The one month long community service, which was originally a one month prison sentence, will be served by him by performing military-related labor, according to Israeli media outlets.

The soldier, whose name cannot be disclosed as per Israeli law, is a sniper with the Givati brigade. He shot and killed 14-year-old Othman Rami Hilles on July 13, 2018, despite the fact that Hilles was unarmed and posed no threat to the Israeli forces.

Even so, instead of being tried under the charges murder or manslaughter, the soldier has only been convicted of “disobeying an order leading to a threat to life or health”, simply meaning that he fired his weapon without obtaining prior permission from his commanders, not following the rules of engagement.

The heinous incident of the extrajudicial killing of the Palestinian minor was caught on video by others present at the scene. The video shows Hilles approaching the Israeli fence at the border during the protest and placing one foot on the fence to climb on top of a higher platform, probably to get a better view of the Israeli side of the border, before being instantaneously shot and falling to the ground. Subsequently, the other protesters rushed towards him and picked him up, attempting to take him to the hospital.

Since March 2018, when the Great March of Return demonstrations began, Israeli forces have shot more than 7,000 Palestinian protesters with live fire during the weekly demonstrations at the border. However, this is only the first conviction of an Israeli soldier for crimes committed at these weekly protests, in which more than 330 Palestinians have been killed and more than 32,000 injured.