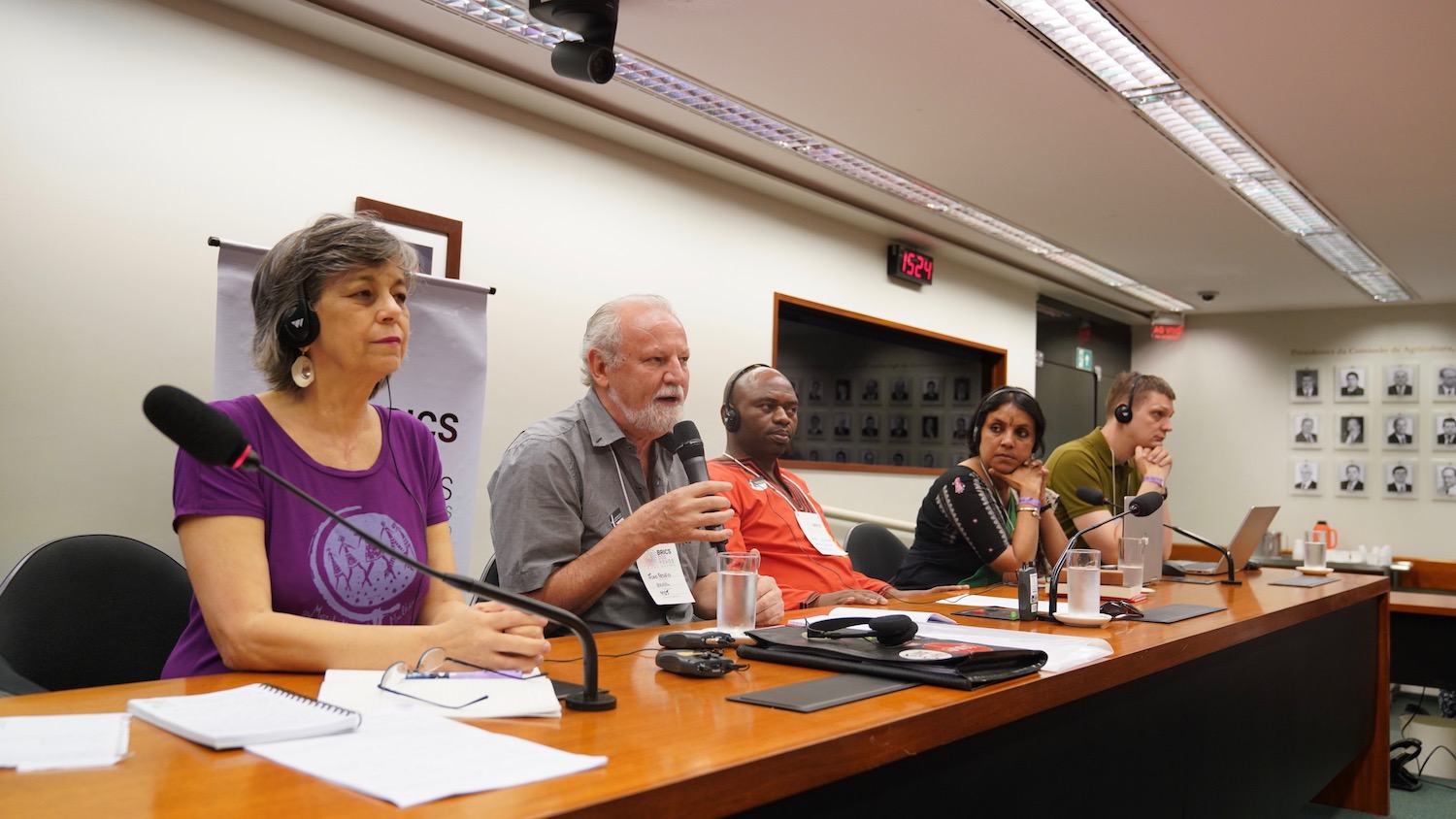 FInal panel of the Peoples' BRICS summit "Challenges of Internationalism, Solidarity and the Integration of Peoples". Photo: Ihsaan Haffejee/New Frame

The second and final day of the Peoples’ BRICS meeting at Brasilia in Brazil saw discussions on growing tensions between capitalism and democracy, and the possibilities of joint struggles and strategies to build international solidarity. At the end of the conference, a statement was released on behalf of the nearly 60 organizations that participated in the event. The conference called on “all progressive forces to build an International Week of Anti-Imperialist Struggle that will take place from May 25 to 31, 2020.” The statement was presented to the members of the Brazilian congress and will also be presented to the embassies of Russia, China, India and South Africa.

The first panel discussion on Tuesday morning centered on the theme of International Political Crises and People’s Struggles. Andrey Pyatakov, of the think tank Russian International Affairs Council (RIAC), said that the main opposing forces in the international arena, according to Pyatakov, are the states that are aligned with the interests of transnational financial capital and the countries that pursue some kind of autonomous capitalist development. Citing the conflict in Ukraine as an example, he said that strategic goal of the segments aligned with transnational capital was to weaken Russia as part of a “global offensive.”

“The forces that inspire these focus of warfare are trying to impose on humanity a neo-fascist dictatorship of the most aggressive, reactionary sectors of transnational capital,” he added.

Ilam Shaheen Khan of the Socialist Revolutionary Workers Party of South Africa said that the bourgeoisie had been unable to come up with solutions to the capitalist crisis and that the expropriation of the majority of the world’s population has become ever stronger. Bourgeoisie governments were attacking the gains of the masses and “the increasing erosion of the social basis and popular support for these governments forces them to rely more and more on authoritarian laws and repression,” he added.

Brazilian congresswoman Jandira Feghali of the Communist Party of Brazil highlighted the role played by various communication strategies in inducing sections of the workers to endorse platforms that are against their own interests. Capitalism and democracy are increasingly taking separate ways, she said.

Referring to how liberal capitalism had failed to provide solutions to the problems that are ravaging humanity, Giorgio Romano of the Federal University of the ABC Metro Area, said the Chinese model could represent an actual alternative to tackle those problems.

The second panel of the day dealt with the question of internationalism and solidarity. S’bu Zikode, of the South African shack dwellers movement Abahlali baseMjondolo, talked about how this called for not only sharing experiences but also organizing struggles together. “Internationalism is likely to succeed when we can practically connect our struggles nationally, regionally, and internationally. We must share programs of action,” the shack dwellers activist said. “We must develop systemic solidarity mechanisms,” he added.

Bhasha Singh, an Indian journalist who is associated with the Safai Karamchari Andolan, a movement that aims to eradicate manual scavenging, stressed the need for integration of struggles at a time when the enemies of the people are consolidating their efforts. While fascist regimes across the world are supporting each other’s efforts, the Peoples’ BRICS offered the possibility of mobilizing on the other side, she said. Citing the struggle of manual scavengers in India and communities engaged in similar work across the world, she talked about building a campaign against discrimination based on descent or occupation.

Aleksandr Mironov of the Russian Communist Workers’ Party pointed out that overcoming capitalism itself is necessary in order to overcome the far right. “As long as capitalism exists, fascism will reappear,” he said. He said that people’s organizations needed more “strategic unity” and that the left had to balance the diversity of perspectives with the need for more concrete, joint actions.

The Brazilian feminist Nalu Faria, of the World March of Women, said it was essential to forge a model based on majorities, without disregarding the specific aspects of these broad compositions.

“Any action which is based on anti-imperialism has to connect this dimension with the aspirations of the majority of the population. We have to incorporate the struggles of the youth, of black people, of indigenous people, of women. Not as a list of demands, but as a project that can break all forms of oppression and exploitation,” she said.

(With inputs from Brasil De Fato)