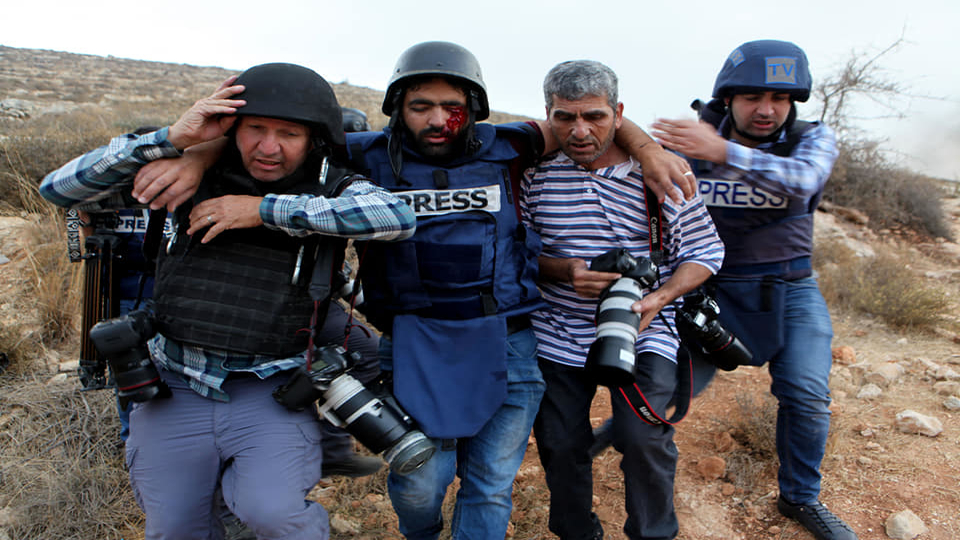 Palestinian photojournalists evacuating their colleague Moath Amarneh after he was shot in the eye by a metallic bullet fired by an Israeli army sniper while covering events in Surif, south of West Bank. (Photo: WAFA Images)

Multiple protests were held by Palestinians in the occupied West Bank on Sunday, November 17, to express solidarity with photojournalist Moath Amarneh, who was shot in the eye with a metallic bullet by Israeli police forces. Amarneh was covering a protest against land confiscation in the Palestinian village of Surif, near Hebron. The Palestinian journalist has lost sight in his left eye due to the injury.

The protests were also against the latest Israeli attacks on Gaza, which killed 34 Palestinians, including eight women and three children, and injured more than 100 others.

The protests were met with heavy repression by Israeli state forces. A student sit-in organized outside the Hebrew university in occupied Jerusalem was attacked by Israeli policemen and three of the protesting students were detained. At another sit-in organized by students of the Palestine Technical University – Kadoorie in Tulkarem, a student was seriously injured when she was struck by a tear gas canister flung by Israeli security forces. Two others were injured by live ammunition.

According to local sources, the student who was hit by the canister suffered serious burn injuries, in addition to a fractured jaw and several broken teeth. She was taken to the Rafidia hospital in Nablus as she required advanced medical care. Dozens of other students experienced suffocation as a result of inhaling tear gas, and were treated by paramedics on the spot.

In Bethlehem, scores of journalists organized a sit-in protest in solidarity with Amarneh. They were also attacked by Israeli security forces with tear gas canisters, resulting in many of them experiencing suffocation. One of the journalists, Monjed Jado, was reportedly struck in the head with a gas bomb. Two journalists were also detained by Israeli forces. One of them, Hamad Taqatqa, has since been transferred to the Etzion military base and security center, while the other, Ahmad Tannoud, was released a few hours after being detained.