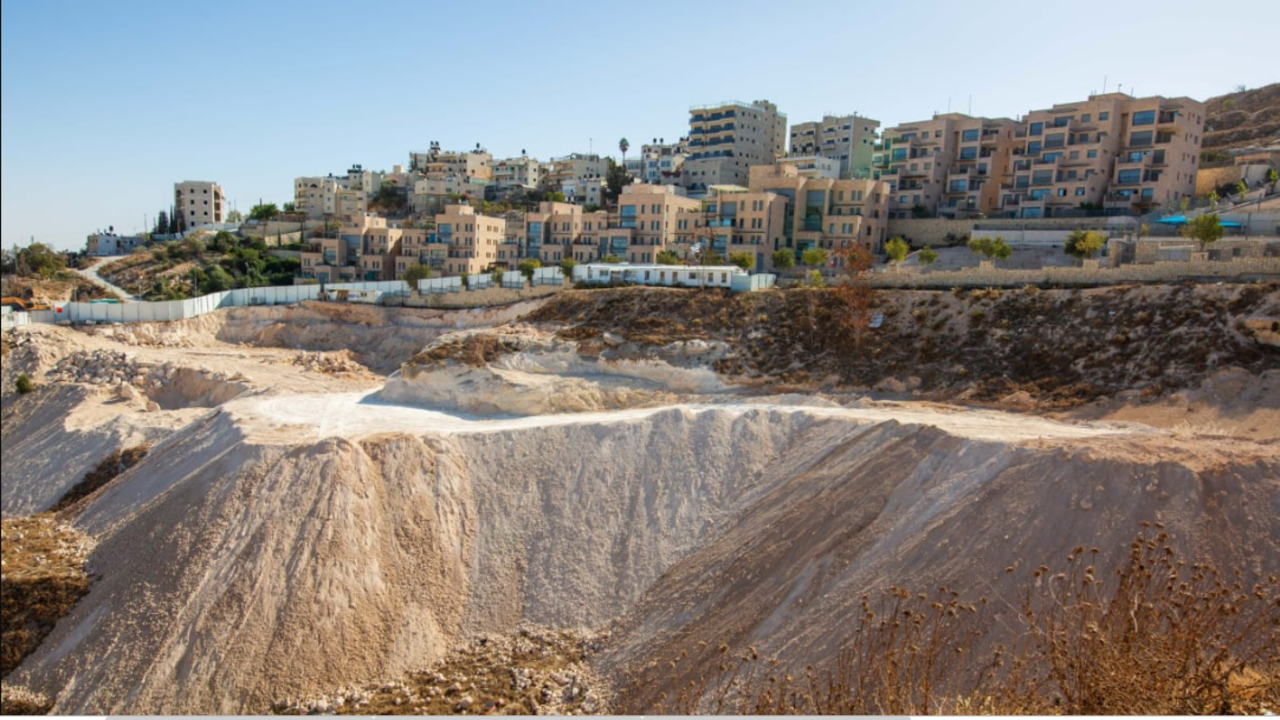 Nof Tzion was established in the early 2000s with capital investments from Jewish investors, and residents began moving in eight years ago. It is surrounded on all sides by the larger, predominantly Palestinian neighborhood of Jabal Mukkaber. Nof Tzion is currently home to 96 families that live in two compounds.The apartments in the settlement face the old city of Jerusalem. It is at present the second largest Jewish settlement situated in a Palestinian neighborhood. According to the Applied Research Institute – Jerusalem (ARIJ), a Palestinian non-governmental organization (NGO), Israel confiscated 140 dunams (approximately 35 acres) of land from Jabal Mukkaber to construct Nof Tzion.

Permits were issued for the construction of 176 additional apartments in Nof Tzion two years ago. Settlement activist and Jerusalem councilman Arieh King states that the current expansion drive is just the first phase of construction, with 300 additional housing units expected to be approved soon. King also said that the expansion of other similar Jewish communities inside Palestinian neighborhoods has been planned.

In a related development, the Israeli daily Israel Hayom reported on Thursday that the construction and housing ministry of Israel is preparing a proposal to build up to 11,000 housing units on the land of the defunct Atarot Airport.

This is despite the fact that Jewish settlements built by Israel on occupied Palestinian territories, such as in East Jerusalem and West Bank, are illegal and a violation of international law as they are in contravention to the fourth Geneva convention. The convention prohibits an occupying power from transferring its population to lands that it occupies.

The news of the expansion of the illegal settlement by Israel must be viewed within the context of the United States recently declaring that it no longer considers Israeli Jewish settlements in occupied Palestinian territories as illegal. While the expansion of Nof Tzion had been planned by Israel in the past as well, it was put on hold due to diplomatic pressure and international criticism of the settlements. It was only after Donald Trump was elected as the US president in 2016 that the then Israeli housing minister, Yoav Gallant, ordered its immediate revival.

Referring to the expansion, Aviv Tatarsky, a researcher with Ir Amim, an Israeli NGO which focuses on the Israel-Palestine issue, said, “The expansion of the settlement into the neighborhood of Jabal Mukkaber is a symbol of the Israel government’s choice to prevent the possibility of an agreement in Jerusalem and to continue to impose its rule on the residents of East Jerusalem without equal rights and with increasing oppression.”