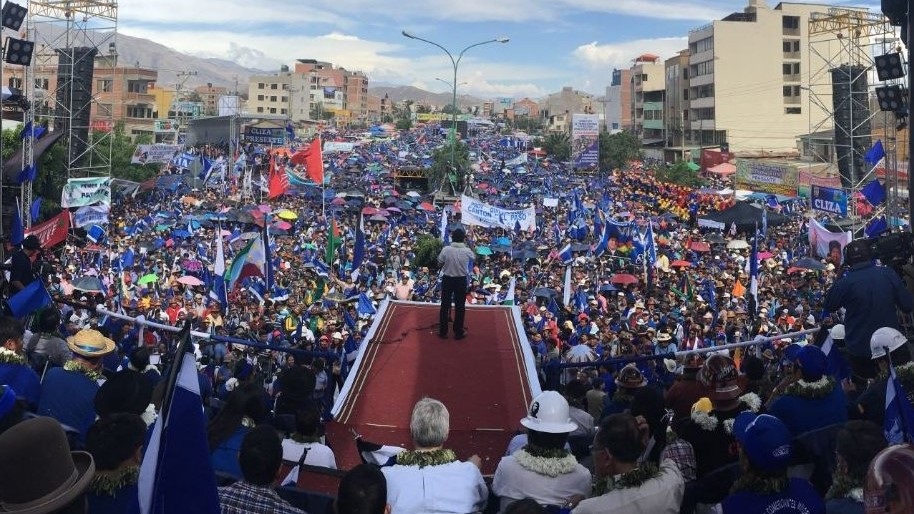 The Bolivian coup regime issued an arrest warrant for Evo Morales who has overthrown in a US backed coup d'état on November 10. Photo: Twitter

Auturo Murillo, the minister of the interior of the coup regime in Bolivia, announced on Twitter that an arrest warrant has been issued against ousted Bolivian president Evo Morales. The arrest warrant issued by the special anti-corruption prosecutor accuses Morales of sedition, terrorism and financing of terrorism. It calls on the police to apprehend Morales and bring him to the attorney general’s office.

In response to the warrant, Evo wrote on Twitter, “14 years after our revolution, the “best gift” that I get from the de-facto government is an unjust, illegal and unconstitutional arrest warrant. It does not scare me, I will continue with more force in the political and ideological struggle for a free and sovereign Bolivia.”

The announcement was expected as Murillo had announced weeks ago that the Bolivian coup regime intended to present formal charges against the former president and hold him responsible for the post-coup violence. On November 19, Murillo presented a video, which has been debunked as falsified, wherein Morales is allegedly speaking on the phone to a trade union leader from Cochabamba, Faustino Yucra Yarwi, and instructing him to maintain blockades of the cities to prevent the entrance of food. At the time Murillo commented, “This is Evo Morales, this is the humble peasant who had the trust of his people. This is Evo Morales doing terrorism.”

Shortly after, the attorney general, Juan Lanchipa, sent a letter to the prosecutor of Cochabamba, Williams Alave, ordering him to initiate a legal investigation of Morales and all others involved. Hours later, Alave announced that they would effectively begin an investigation into Morales, Yucra and others on charges of sedition and terrorism.

It is worth recalling that Evo Morales was forced to resign from his position of democratically elected president on November 10 amid a campaign of threats, extreme violence, and insubordination among the police and army against the constitution. He was forced to flee the country amid serious threats to his life

He is currently in Buenos Aires, Argentina after spending a month in exile in Mexico. Upon his arrival to Argentina on December 12, the ousted president filed the request to be considered a political refugee and it was approved shortly after. Given this status, Morales is protected from any possible extradition to Bolivia.

Even so, Bolivian authorities have claimed that they are exploring all options to fulfill the warrant even in foreign lands.

The objections to the arrest warrant are vast. It is seen as politically motivated and an attempt by the coup government to block any possibility of Morales’ return to Bolivia to support the electoral campaign of his party, the Movement Towards Socialism (MAS). While Morales has been barred from participating as a candidate in the upcoming elections which should be held in March, he was elected by his party as the campaign leader during its assembly on December 7. The figure of Morales and his success in his 13 years as Bolivian president still holds important weight that the right-wing needs to contain.

Furthermore, the accusation itself is hard to comprehend. The coup regime seeks to hold Morales responsible for the violence and chaos that occurred in the country following the coup that took him out of office. For weeks after the coup, the people of Bolivia took to the streets across the country in rejection of the coup and to demand the immediate resignation of Jeanine Áñez who heads the coup government. During this time, 35 people were killed, at least 700 were injured and over 1,000 were detained by the Bolivian security forces.

However, the agents of the national police and the army who participated in the repression have been legally shielded from any criminal liability. On November 15, just five days after the coup and amid the violent repression of the anti-coup protests, Jeanine Áñez passed Supreme Decree no. 4078 which exempts those that participated in the “operations for the restoration of order and public stability” from criminal liability and authorizes them to use whatever means necessary to suppress the protests.

Thus, those who were directly responsible for massacres, forced disappearances, torture, rape and sexual crimes, selective persecution of political and social leaders and their families, restricting press freedom, and illegal spying operations are completely protected by law. Many of these acts have been classified by an Argentine human rights delegation as crimes against humanity. Meanwhile, the person who was violently driven out of the country and was thousands of kilometers away is facing serious charges.

When the arrest warrant was announced, Murillo was on a tour of Washington DC where he has been meeting with key representatives of the US imperial complex that have been key in legitimizing and supporting the coup. This includes Luis Almagro of the Organization of American States, representatives of United States Agency for International Development (USAID), conservative think tank Americas Society/Council of the Americas and conservative politicians Senator Rick Scott, national security council member Mauricio Claver-Carone, and senator Marco Rubio.

During this time, US president Donald Trump tweeted in support of Jeanine Áñez.

We support @JeanineAnez in Bolivia as she works to ensure a peaceful democratic transition through free elections. We denounce the ongoing violence and those that provoke it both in Bolivia and from afar. The U.S. stands with the people of the region for peace and democracy!

Evo Morales rightly pointed out, “The support of Trump to Áñez is further evidence that the United States organized the coup détat in Bolivia. If Trump condemns violence, Áñez, Camacho, and Mesa should comply with this and end the repression and political persecution.