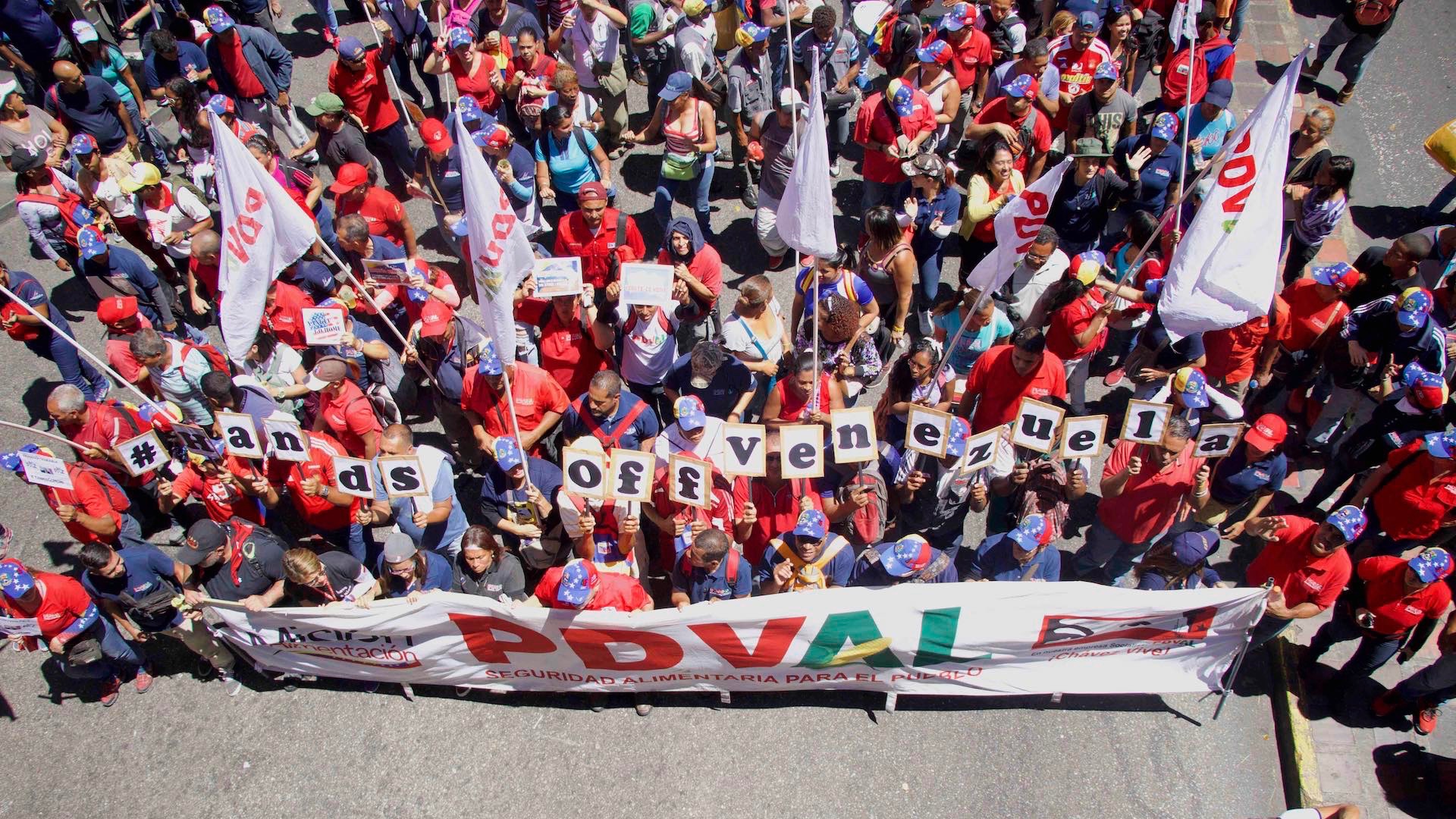 For the past two decades, Venezuela has been forging a new path to sovereignty, autonomy and ensuring a dignified life for its people and the people of the world. As a result, it has constantly been in the cross hairs of imperialist aggression. The United States, with the support of its regional allies, has employed a variety of tactics and strategies to reincorporate Venezuela into the block of resource-rich countries in Latin America that are obedient to their interests. However, throughout the 20 years of the Bolivarian Revolution, the people of Venezuela have resisted all forms of imperialist aggression and attempts to destabilize the country.

2019 was by far one of the most fiercest years to date of this aggression with several coup attempts, threats of military intervention, serious attacks on the national electrical infrastructure and an intensification of unilateral coercive measures by the United States. All these have been largely responsible for the economic crisis in the country.

However, amid economic, political and social instability and looming threats, the people of Venezuela reaffirmed their commitment to carry forward the dreams of Hugo Chávez and Simón Bolívar. Venezuelan grassroots organizations focused on increasing productive capacity in the rural and urban regions to build necessary autonomy for survival. Political and ideological education was given priority within organizations and movements, and Venezuela remained committed to building working-class internationalism even amid domestic challenges.

The Guaidó factor and the coup that never was

From the first days of January, it was clear that the Venezuelan opposition and their key allies, the United States and the Lima Group, were planning something big. Presidential elections had been held in Venezuela in May 2018 but even before they were held, radical factions of the right-wing opposition and their international allies had declared that the elections were illegitimate.

Despite the presence of international observers, a 46% participation rate and an overwhelming victory for Nicolás Maduro with 68% of the vote share, the enemies of Venezuela declared that as of January 10, 2019, when Maduro would begin his second term, they would classify his government as illegitimate.

Five days before Maduro’s swearing in, the National Assembly, which has been held in contempt of court since 2016, elected a new leader, Juan Guaidó. He declared that Nicolás Maduro would be considered a usurper and that the National Assembly was the only legitimate representation of the will of the people.

The day of Maduro’s swearing in on January 10, thousands of people gathered outside the Supreme Tribunal of Justice in a tremendous show of support to the constitutional president and the Bolivarian project. On the other side of town, in the stronghold of the elite right-wing opposition, Guaidó presided over a several-hundred strong rally to call for Maduro to step down and for new ‘fair’ elections to be held.

On January 23, Juan Guaidó declared himself ‘interim president’ of Venezuela. Within a matter of hours, Donald Trump and other top officials from the US recognized him as interim president. The General Secretary of the Organization of American States (OAS), Luis Almagro, and the governments of Colombia, Brazil, Paraguay, Ecuador and others followed shortly after.

The people of Venezuela and the world immediately took to the streets to reject this blatant US-backed coup attempt and to express their support to Maduro and the Bolivarian Revolution.

Having gained no real tangible power or authority, Guaidó and his allies sought to generate instability by forcing US-sent ‘humanitarian aid’ into Venezuela at the border with Colombia. The Venezuelan government had rejected the offer of humanitarian aid from the US, pointing out that a better way to alleviate the economic crisis would be for it to lift the unilateral coercive measures. However, the aid offer was clearly politically motivated and after the rejection, Guaidó declared an ultimatum of February 23 for the entrance of the aid into the country.

Yet again though, Guaidó and his allies were  soundly defeated. The aid did not enter Venezuela and exposés (even one from the New York Times) revealed that the tankers were not carrying humanitarian aid and that the supposed violence of the Venezuelan army was in fact from the Colombian side and by defectors. Later on, it was also revealed that Guaidó met with and received ground support from known Colombian paramilitary chiefs when crossing the border.

On April 30, Guaidó again went on the offensive. This time he called on military personnel to mobilize to the La Carlota airbase in Caracas for the “final phase” of ‘Operation Freedom’ and definitively overthrow the democratically elected president, Nicolás Maduro. The coup attempt was accompanied by attempted takeovers of Venezuelan embassies in Buenos Aires and Washington DC by Guaidó’s supporters. Once again, his grand call failed and the Venezuelan armed forces managed to pacify the volatile situation within hours.

However, the Venezuelan embassy in Washington DC became a battleground between anti-imperialist, pro-peace activists and the far-right opposition backed by police and secret service. On May 16, police broke into the Venezuelan embassy in Washington DC, in flagrant violation of the Vienna Convention and arrested the four remaining members of the Embassy Protection Collective who safeguarded the embassy for 37 days amid threats, violent attacks, arrests, power cuts, blockage of food and medicine, and intimidation. Carlos Vecchio, the‘chargé d’affaires’ in the US appointed by Guaidó, took over the embassy.

Guaidó began to lose legitimacy within the opposition itself as he became entangled in several corruption scandals related to the embezzlement of humanitarian aid funds and the CITGO assets. His term as leader of the National Assembly ends on January 5 and a new leader will then be elected.

Squeeze them until they break

Accompanying Juan Guaidó’s political charade were constant attempts to destabilize Venezuela by making life unbearable. The unilateral coercive measures were intensified, the national electric system was attacked, and one of Venezuela’s most important asset’s CITGO, the US subsidiary of PVDSA, was frozen and then expropriated.

The unilateral coercive measures, also referred to as economic sanctions, began in 2014 and while the US government claims that the measures target specific individuals, companies and government institutions, they have effectively been a collective punishment of the population of Venezuela. The sick, elderly, and disabled have suffered the most.

Since 2017, over 150 unilateral coercive measures against Venezuela have been applied. The concrete impact includes a decline in oil production translated to a loss of $6 billion in oil revenue in one year, $7 billion dollars of Venezuela blocked in 40 international banks, $130 billion dollars of losses in the Venezuelan economy due to the economic blockade, and $1.2 billion dollars in gold retained by the Bank of England. The loss of assets both liquid and financial, as well as the blockade by international banks and financial institutions, has meant that the country has been unable to import essential items and budget cuts have been made across the board.

A report by the Center for Economic Policy and Research estimated that from 2017 to 2018, there was a 31% increase in general mortality which would imply more than 40,000 deaths caused by the sanctions.

The attacks on Venezuela’s national electrical system were a bid to engender panic and chaos in the country. Massive power outages were experienced across the country for several following a cyber attack on the Simon Bolivar Hydroelectric Plant or the El Guri plant on March 7. Days later, on March 25, two more attacks on the national electrical system took place. These attacks left 11 States without power while widespread outages occurred in Caracas. On March 29, Venezuelan authorities reported another massive electricity cut which left vast zones of Caracas and several areas of the country without electricity.

In the face of the electrical outages, the people of Venezuela resorted to creative and community-based solutions to ensure a supply of water and assist those who are most vulnerable. They also took to the streets to reject the dirty methods of the US-backed opposition and express their support to the government.

Throughout the year, in the face of this great adversity, the Venezuelan people and the people of the world continued to reject US attacks.

In February, the first  Che Guevara Internationalist Youth Brigade, comprising 150 young militants from 40 countries, worked with their comrades in Venezuela to express solidarity and learn from the experiences of the Bolivarian Revolution. Following the brigade, 500 people from 87 countries and 181 people’s movements and organizations participated in the International Peoples’ Assembly in Solidarity with the Bolivarian Revolution and Against Imperialism from February 24-27.

Activities such as these have been key in strengthening the commitment of activists worldwide to defend the Bolivarian Revolution and stand in solidarity with the Venezuelan people. The global mobilization held on March 16 following a call from the International Peoples’ Assembly was a testament to this.

2020 is likely to be full of even greater challenges for Venezuela and the people resisting across the world. But as the contradictions of those that seek to thwart the aspirations of the people become clear, the unity and commitment of the soldiers in the fight for liberation is strengthened.