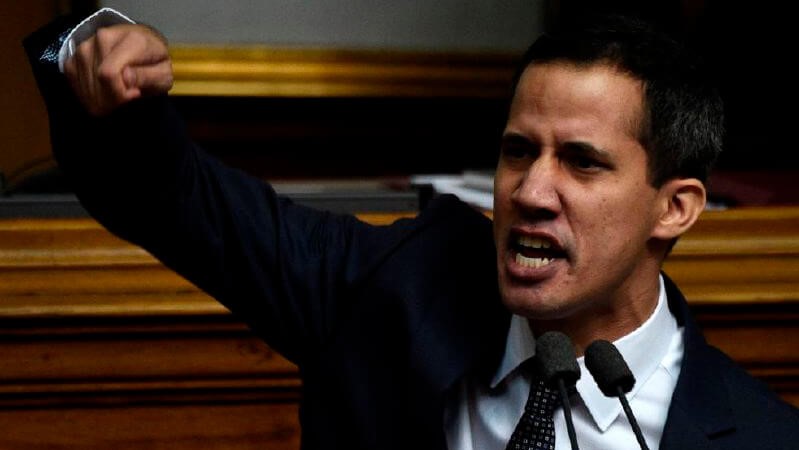 Juan Guaidó and other far-right opposition legislators violently stormed the National Assembly building after the session had concluded and alleged that they had been barred from entering despite videos indicating otherwise.

The far-right Venezuelan opposition led by Juan Guaidó continues to manufacture international media charades in order to spread lies and create chaos. After losing his post as president of the National Assembly on Sunday January 5 to Luis Parra of the center party Justice First (PJ), Guaidó has refused to recognize the results and set up a parallel parliament. Today, the first ordinary session of the National Assembly was held under the direction of the newly elected leadership.

The session which met quorum and was carried out normally was denounced by far-right opposition legislators as being a “farce.” As had occurred on Sunday January 5 during the National Assembly internal elections, Guaidó and legislators of the fraction of opposition that still supports him, created a media spectacle in order to create the illusion that they are being persecuted and denied rights by the Government. However, on the ground reporting by outlets such as Telesur revealed a different story.

During the session, a couple of opposition legislators forcibly entered the press balcony, accompanied by dozens of journalists, instead of entering with the rest of the legislators and shouted that the session was a farce and they were being denied entry. They insisted that the central access door was locked, impeding their entry, but videos showed that this was not true. The legislators then left the building and some while later, Juan Guaidó and a couple of other legislators arrived.

The National Bolivarian Guard was managing the security of the entrance to the National Assembly and had asked each legislator to present their credentials one by one. When Guaidó arrived, he insisted they let him and the group of supporters with him pass because “he is the president of the National Assembly,” despite having been voted out on January 5.

After the session of the National Assembly concluded, Guaidó and the legislators stormed the building. Francisco Torrealba, a legislator from PSUV, narrated to the press the sequence of events: “We left the hemicycle [parliament chamber], they closed the doors and outside we found Guaidó and some 20 other deputies that were ecstatic trying to enter Parliament…they charged at the National Bolivarian Guard, attacked the four women that were there guarding the door and they went to the chamber of deputies. They sat on the seats above, they took a picture, and we stayed here because we saw that they the right-wing deputies were hitting each other.”

He denounced that this way of “arriving to parliament is not justifiable, they have been able to enter with no issues and ask to speak just as any of us would ask, and if they have wanted to or if they are questioning the quorum they would have been able to ask for nominal verification, but they did not do any of this, instead they made a new show which was a little more aggressive than January 5.”

Opposition legislator José Brito also publicly condemned the actions of Guaidó and his followers, calling him a coward and of having scammed the hope of the people.

Shortly after the debacle, US Secretary of State Mike Pompeo released a video of support to Guaidó shortly after and commended him and his allies for not giving up.

The U.S. will continue to support President @JGuaido and the people of #Venezuela and rally all other freedom-loving nations across the globe to do the same. We do this because the Western Hemisphere should be a hemisphere of freedom. pic.twitter.com/0As2QRXrsi

What happened on January 5?

As per the Venezuelan Constitution, the National Assembly held the annual elections to select a new governing board on January 5.

With the votes of 81 of the 150 legislators, Parra was appointed president, Flanklyn Duarte of the Social Christian Party, COPEI, was elected as the first vice president; José Noriega, formerly of Guaidó’s party Popular Will (VP), as the second vice president and Negal Morales of the Democratic Action (AD) as the secretary of the Venezuelan parliament for the period of 2020-2021.

These results were rejected by Guaidó and his supporters and they installed a “parallel parliament” in the office of opposition newspaper El Nacional.

Guaidó’s justified his rejection of the results claiming that the elections were fraudulent because the necessary quorum was not reached and he was allegedly barred from entering parliament by security forces. A photo circulated widely across international media wherein he is attempting to scale a fence and being blocked by the security forces.

In contrast to Guaidó’s claim, there are videos that show how at first he decided not to enter the headquarters because the group of deputies he came along with were not allowed to do so. Guaidó wanted to enter with legislator Gilberto Sojo whose parliamentary privileges were suspended by the Superior Court of Justice (TSJ). Videos circulating on social networks showed how security forces tell Guaidó that he can enter but not Sojo.

However, hours later, when the assembly was about to vote, the self-proclaimed president set up a show by trying to climb a fence to enter the headquarters and claiming that he had been prevented.

In response to the allegation of lack of quorum, Parra reported that 140 deputies were in the National Assembly for the vote, and that another 10 entered at the end, so the quorum was reached.

“No one prevented Juan Guaidó from entering. He didn’t come in because he didn’t have the votes, so he stayed outside the Federal Legislative Palace. Others, who had arrest warrants, came in bravely. We’re not going to get hooked in the past and Guaidó is past,” said Parra.

The National Assembly is formed by 167 legislators and the quorum required for a plenary is 84 legislators.

The fall of Guaidó

“In this 2019 that has just concluded, you were the hope of the country, today you are the biggest disappointment, you could be the future, but today you are and you will be the past, you were a dream that turned into a nightmare, Juan Guaidó from today your time ends,” said right-wing opposition deputy, José Brito. “Guaidó used the people to consolidate not the forces of change, but his own position of power,” added Brito.

“Guaidó lied to the country and to the international community, he also repeatedly denied to everyone that he was not in conversation with (President Nicolás) Maduro and the truth is that you stood up and sat, over and over again, with you back towards the country and the main international allies,” Brito denounced.

President Nicolas Maduro publicly recognized Luis Parra as the new President of the National Assembly. He assured that the election of the new board of directors of the National Assembly was held within the framework of the constitution and with all security measures in accordance with both official and opposition authorities and political leaders.

“As established by the Constitution, this January 5, a new governing board of the National Assembly was elected for the period 2020-2021, which will be chaired by the opposition deputy Luis Parra of the Justice First party,” said President Maduro.

This new board that includes traditional parties is willing to negotiate with Chavismo in the face of this year’s legislative elections. President Maduro confirmed this possibility and announced that negotiations with the opposition sectors would take place soon. “There is a work agenda that has been scheduled. Tomorrow there is a meeting on the table to reach an agreement and renew the National Electoral Council and that Council will convene parliamentary elections this year,” said Maduro.

The US and its allies’ disapproval

Following the National Assembly elections, the international reaction was swift. US officials rejected the new parliamentary leadership and reiterated their support for Guaidó.

Likewise, the Lima Group, a group of the right-wing governments of the region, formed with the objective to intensify diplomatic measures against the constitutional government of President Nicolás Maduro and force his resignation, indicated that they would not recognize Venezuela’s new legislative authorities.

The European Union also released a statement denouncing “irregularities” in the vote and stated that it would continue to recognize Guaidó as the National Assembly president.

Establishment of a parallel assembly

Subsequently, Guaidó and his deputies held a meeting at the headquarters of El Nacional, an anti-government newspaper. The opposition news outlet reported that a parallel parliament had re-elected Guaido as president with the votes of around 100 legislators. However, no information was provided as to who took part in the vote.

Immediately after, the US Secretary of State, Mike Pompeo, welcomed the re-election of Guaidó. “Congratulations to Juan Guaido on his re-election to the National Assembly of Venezuela! Arrests, bribes and blocking access to its building were unable to derail Venezuela’s National Assembly. Only a transitional government organizing free and fair presidential elections can end the crisis,” tweeted Pompeo.

Venezuelan Minister of Foreign Affairs, Jorge Arreaza, rejected the interventionists pronouncements of the United States. “We reject the rude interventionism of Trump’s administration in the internal affairs of Venezuela and its institutions. They do not quite understand that we are an independent and sovereign country. They should deal with the disaster they intend to cause with new wars for oil,” wrote Arreaza in a tweet.

Arreaza reiterated that despite the constant attacks by the US and its satellite governments in the region, they will not harm the stability of the country. “After the resounding failure of his coup strategy in 2019, Trump organized a new circus today, aiming to prolong the aggression against the people of Venezuela and the fiction of a fake and non-existent government. Results: another intrusion, another blunder, another failure,” wrote Arreaza in another tweet.