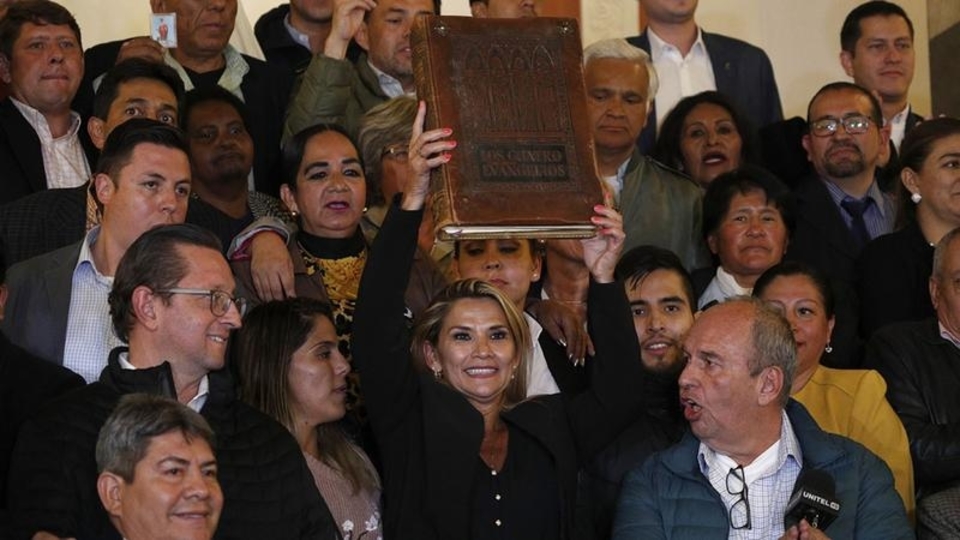 Bolivia's interim president Jeanine Áñez has frequently spoken of indigenous people with derision, even saying that she dreams of a Bolivia without “satanic indigenous rites.” Photo: AP

It was a curious exchange. Frustrated by the attacks on his party — the Movement for Socialism (MAS) — former president of Bolivia Evo Morales made an audio recording in which he called upon his supporters to form militias. Maximilian Heath of Reuters went to Argentina to speak with Morales about this leaked recording; Morales said, “In Bolivia, if the armed forces are shooting the people, killing the people, the people have the right to organize their security.”

Morales’ anxiousness is rooted in fact. The Inter-American Commission on Human Rights — a body of the pro-U.S. Organization of American States — reported in December 2019 that there have been a series of massacres conducted by the armed forces of the current interim government in Bolivia. The use of the word “massacre” in this report is significant; these were not clashes or conflicts, but the targeted murder of civilians who supported MAS and Morales.

The interim president of Bolivia, Jeanine Áñez Chávez, has made inflammatory statements about the indigenous support base of MAS and Morales. She has frequently spoken of them with derision, even saying that she dreams of a Bolivia without “satanic indigenous rites” and that “the city is not for the Indians.” Áñez signed Supreme Decree no. 4078 that exempted the military from any criminal responsibility for its use of force; she wants to ban MAS, and her interior minister has filed a warrant for the arrest of Morales. This is a rapid and disturbing attack on the political fabric of Bolivia.

Morales’ statement about militias came merely as a way to say that he worried about the repression and violence occasioned by the interim government and the military, now immune from prosecution. US President Donald Trump’s main envoy to Latin America — Mauricio Claver-Carone (who organized the bankrupting $57 billion loan to Argentina when he was the U.S. director at the International Monetary Fund) — went to Bolivia and attacked Morales. Morales, Claver-Carone said, is fomenting insurrection from Argentina. This is a bizarre statement.

Morales was re-elected in 2014. There was not a whiff of impropriety in that election. He had a mandate to remain in office until January 2020. Even if there was a problem in the 2019 election, he should have remained in office until this month. But he was removed by a US-backed military coup. That coup is not the insurrection that worries Claver-Carone. What worries him is that Morales is concerned about his supporters who are being intimidated and killed. It was not the coup, but Morales’ statement of anguish that became the scandal. Morales then apologized for his statement.

Bolivia will face an election on May 3. The Movement for Socialism Party nominated Luis Arce Catacora, Bolivia’s former minister for the economy, as its presidential candidate, and David Choquehuanca, Bolivia’s former foreign minister, as its vice-presidential candidate. MAS has been deeply bruised. More than 100 government officials from the MAS party are either in detention or face criminal charges, while a handful are in the Mexican embassy in La Paz (they have been denied safe passage to the airport).

The anti-coup uprising in Chapare province led the interior minister Arturo Murillo to make a statement that he would perhaps disenfranchise the entire province if the rebellion continues (the rebels burned down a hotel that he owns). Supporters of MAS and its party workers are afraid to leave their homes, let alone campaign in the election. Morales’ statement came as a mirror of their own anxiousness.

No one imagines that there is going to be a “fair election.” The Trump administration has said it will send a USAID team to Bolivia to monitor the situation, and then to resume US aid to the country; the US will also monitor the elections. Between the US monitors and Supreme Decree no. 4078, the conditions for a fair election simply do not apply.

And not many outside the region seem to have any problem with this attack against democracy.

The UN numbers are conservative. For 2018, the Center for Research and Popular Education Peace Program, based in Colombia, documented 1,151 death threats, 648 assassinations, and 304 cases of physical injuries. But the UN’s trendline is correct. Of the murders last year, 98% took place in very poor rural areas. The killers, the UN suggests, are “criminal groups and armed groups linked to illicit economies in areas vacated by the FARC-EP.” In other words, right-wing paramilitary groups and their affiliated drug gangs have taken advantage of the peace treaty signed by the Left to terrorize the countryside.

In the Tricontinental: Institute for Social Research dossier on Colombia (December 2019), the argument is made that the Colombian oligarchy does not want to move toward peace because this would shift the needle of Colombian politics toward the people’s movements and the Left. The continuation of the war — now as assassination and intimidation — favors the oligarchy. They prefer this violence to democratic politics.

These targeted murders and this targeted intimidation is only one part of the problem in Latin America. The other is that this region — with its outrageous social inequality — experiences violence at extreme levels. While Latin America is home to only 8% of the world’s population, 33% of all homicides occur in the region. This includes high violence against young men, and it includes the highest rates of femicide in the world. None of the right-wing governments are interested in addressing this fundamental problem for the hemisphere.

What the government of Iván Duque is doing in Colombia is what the interim government of Jeanine Áñez is doing in Bolivia — both are using extreme state violence against trade unionists and peasant organizers, against socialist leaders and indigenous leaders. This extreme violence undermines the possibility of democracy and allows the oligarchy to be re-elected in polling booths where the Left not dare enter.

In 2016, Evo Morales inaugurated the General Juan José Torres Anti-Imperialist Command School in the town of Warnes. General Juan José Torres was the socialist president of Bolivia in 1970-71. He was overthrown in a coup by the Bolivian general favored by the CIA, Hugo Bánzer. Bánzer had closely worked with the Nazi leader Klaus Barbie to set up the CIA-run Operation Condor to search out and kill any and every communist in the hemisphere. They killed Torres in 1976. The combination of the CIA, Nazis, and the oligarchies of the region is not something from the past: Brazil’s culture secretary — Roberto Alvim — recently plagiarized a speech from the Nazi Joseph Goebbels.

The interim government’s interim Defense Minister Luis Fernando López said that his government has renamed the Anti-Imperialist school. “We are not anti-anything,” he said, as if his government is not anti-Morales, anti-MAS, and anti-communist. The school has been renamed Héroes del Ñancahuazú.

In 1967, Che Guevara and his National Liberation Army of Bolivia operated near the Ñancahuazú River in Bolivia’s southeast. The government of General René Barrientos Ortuño, the CIA agent Félix Rodríguez, and the Nazi Klaus Barbie ran the operation to destroy Guevara’s campaign. They named their operation the Ñancahuazú Campaign. The Anti-Imperialist School in Bolivia now honors the men — led by a CIA agent and a Nazi — who killed Che Guevara. It sends a message to the Che Guevaras of today: We will get you. This is the democracy of the oligarchy in Latin America today.