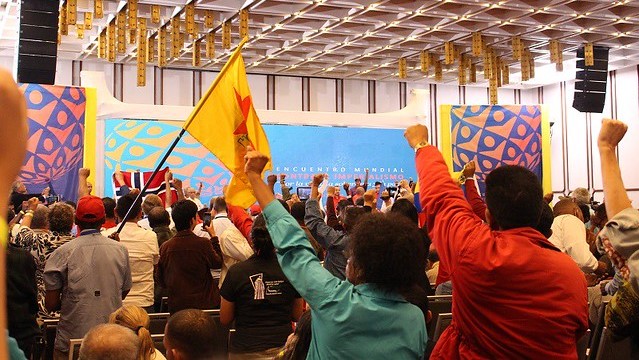 “The peace of the planet is seriously threatened by the policy of military aggression of the United States,” read the final declaration, approved unanimously, in the World Encounter Against Imperialism, held from January 22-24 in Caracas, Venezuela. The event brought together more than 800 people from five continents and was organized as part of agreements reached in the XXV Sao Paulo Forum, also held in the Venezuelan capital, in July last year.

Beyond the threats coming from the US empire, the declaration points out that “on top of this there is an ethical crisis that originates in the dominant way of life of the market economies, where the national cultures and human values are buried, in order to impose a society of consumption. The cult to the anti-values of capitalism worsens the crisis of the human condition that is generated in the current model of cohabitation. Imperialism is in crisis and this makes it much more aggressive, dangerous and destructive.”

The encounter was organized by the United Socialist Party of Venezuela (PSUV), of the current president Nicolás Maduro, and worked towards international coordination related to the issue, beyond bringing the experiences of the South American country to other countries.

“These encounters also end up being processes of analysis for our party, of our revolution. We believe it is important to promote spaces that allow us to see ourselves in a global context of struggle, because our struggle could be a contribution from Venezuela to the struggles of other countries,” stated Diva Guzmán, vice-minister of Education and Work for Liberation in Venezuela.

With spaces of debate about the hegemonic cultural industry, the military actions of the North Atlantic Trade Organization (NATO) and Bolivarian socialism of the 21 century, the militants debated alternatives to the current economic model for three days.

“The way of acting of the [US] empire is more than evident. If we look at the example of Venezuela, you realize that a powerful country, in the military realm, inserts itself in the internal affairs, it has a plan and an interest in generating total chaos in our economy and our society. This is not just here, they are also applying this in Bolivia, they did it byway of manipulation in Ecuador, through imposition in Argentina and in Brazil. They are reviving the Monroe Doctrine,” commented Guzmán about the anti-imperialist character of the event.

Due to the aggressive actions of the United States and the European Union, the vice-minister also pointed out that there is no more space to respond within diplomacy, because the democratic institutions and international law were thwarted by the big world powers.

“To defeat a monster as big as US imperialism, it is necessary to do everything. Among these, work in unity, as we saw here. I know that if we achieve socialism in the US, we can liberate the world of the most horrific imperialism that has existed,” declared Elizabeth Birriel, from the US and a member of the Party for Socialism and Liberation.

Beyond the debate on the central issue of the encounter, anti-imperialism, there were also debates on sector-based issues: on women, Black people, Indigenous people, workers, communes, communications and youth.

In the trade unionist debate, participants discussed the creation of a platform of global anti-imperialist struggle, as well as the exchange of experiences of political education of the working class.

In the debate about communes, there was a proposal for the creation of an online library to share experiences of building people’s power, like those of the Venezuelan communes or the settlements of the Landless Rural Workers’ Movement (MST) of Brazil.

In the communications sector, the creation of an international network of alternative communication was proposed, as well as the creation of courses of critical political education in the Communications University, an initiative announced by President Nicolás Maduro during the Communications Congress in December. Motions of support to Telesur and Hispantv were also approved, which are two stations that have received threats internationally. In the case of Telesur, by the opposition deputy Juan Guaidó, that one week ago named a supposed new president of the station to “recover” the multi-state transmission.

Beyond this, the anti-imperialist encounter approved special motions in support of the struggle of the Chilean, North-Korean, Saharawi, Bolivian, Cuban, Haitian and Catalan people. They also condemned the I Ministerial Hemispheric Conference of the Fight Against Terrorism, that brought leaders of the extreme global right together to discuss new methods of combat to left-wing organizations like the National Liberation Army (ELN), Hezbollah, and even the Bolivarian Revolution.

In this same extreme right-wing conference, held in Bogotá, Colombia, new military exercises were announced from January 23-29, between the Southern Command -the arm of the Pentagon that controls the US bases in Latin America– and the Colombian army, in a clear regional offensive.

In order to stand up to the series of threats that were described by the militants, the delegates approved the organization of a second World Encounter Against Imperialism, so as to consolidate an international platform of struggle for the next year, with the idea of it being held in Venezuela. Before this, continental anti-imperialist encounters will be organized to strengthen the left-wing organizations in each region.

Other days of united global mobilization were defined during this period, beginning on February 27, that will commemorate 31 years of the “Caracazo” – the popular spontaneous uprising that denounced the misery of the Venezuelan people during the presidency of Carlos Andrés Perez and ended up being a precursor to the emergence of Chavismo. The call for global mobilizations on that day would be focused on supporting the Bolivarian Revolution.