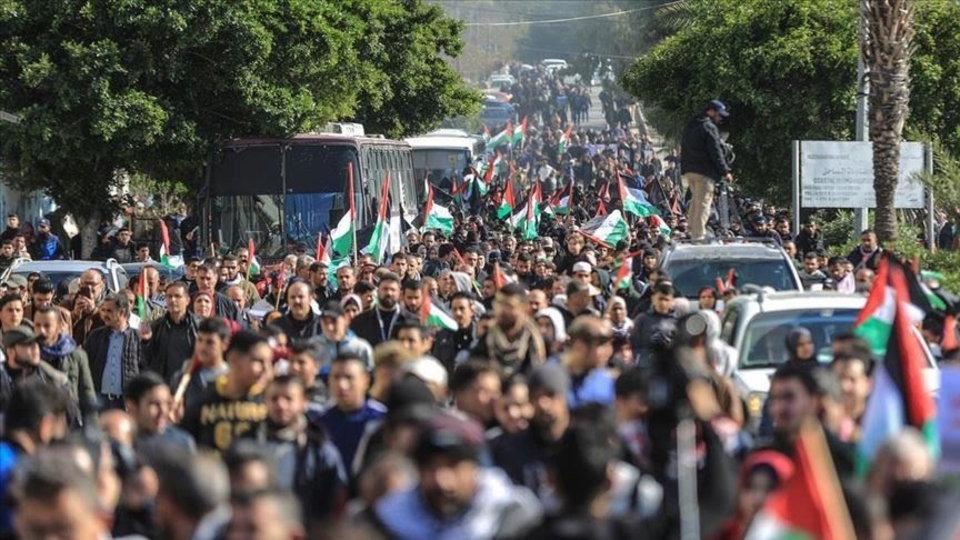 Protests were held across the Occupied West Bank and Gaza against Trump's deal of the century.

Palestinians across party lines have rejected Donald Trump’s so-called “deal of the century” which was announced yesterday, on January 28. Demonstrations were held in different parts of West Bank and Gaza strip against the proposed deal that is heavily biased in favour of Israel and has no Palestinian representation.

Addressing the media after an unprecedented emergency meeting of the Palestinian Authority, president Mahmoud Abbas said “Palestine is not for sale. The Deal of the Century belongs to the dustbin of history,” Al-Jazeera reported.

The proposal was also condemned by various regional players such as Turkey and Hezbollah in Lebanon. The Arab joint list in the Israeli Knesset also condemned the plan.

Trump announced the details of the deal at the White House, with Israeli prime minister Benjamin Netanyahu standing beside him. Trump called it a “win-win solution” which will secure a two-state solution. The report was prepared by his son-in-law Jared Kushner and others.

The highlights of the deal

The unveiling of the details had been delayed for several months due to the Israeli elections. However, the economic aspect of the deal was unveiled in June last year, according to which, USD 50 billion would be invested to help the economy of Palestine if the deal went through.

According to Trump, the deal proposes a state for Palestinians on land which is double the size of what they currently control, in return for Palestinian recognition of Israeli sovereignty over all the illegal settlements in West Bank and East Jerusalem. As per the deal, Palestinians can have their capital “somewhere in Eastern Jerusalem” while undivided Jerusalem would be the capital of Israel.

The deal also proposes Israeli control over the Jordan Valley and all borders for security reasons but promises to maintain territorial continuity through highways for the Palestinians. It proposes a freeze on building new settlements for four years, the period during which both parties are to settle on the details of the deal.

An attempt to legalize occupation

Palestinians have been demanding a state based on the 1967 borders, with East Jerusalem as its capital and the right to return for all the refugees of the Nakba in 1948. Both the parties signed an accord in 1994-95 which had created a short-lived possibility of peace. However, since 1994, successive Israeli administrations have adopted a more aggressive approach towards settlements in which they got active support from the US administration.

The US has recently moved away from its commitments to help create a Palestinian state on the basis of 1967 borders. Trump administration recognized Jerusalem as the capital of Israel in 2017 and moved its embassy from Tel Aviv.  It has also stopped giving its share of aid to the UN body working among the Palestinian refugees. The Trump administration has also reversed its long-held position on Israeli settlements in the West Bank and Eastern Jerusalem and had recognized them as Israeli territories in November 2019.

According to UN resolutions and international law, Israeli control over the occupied territories and the Jewish settlements inside them are illegal. Successive UN resolutions since 1948, the most important being UN Security Council resolution 242, asks Israel to vacate all the land it occupied in the war. United Nations’ General Assembly resolution 194 adopted in 1949 provides all the refugees from the 1948 Nakba the right to return. According to the Fourth Convention of the Geneva Convention settlements and so called “security barrier” or apartheid wall which runs across the occupied territories of West Bank and East Jerusalem are also illegal.

Donald Trump’s proposed deal tries to legalize the occupation and all the atrocities committed against the people in Palestine by the Israeli state. None of the provisions in the deal were discussed with the Palestinians before it was prepared. This is the reason that today Palestinians are comparing it with the Balfour Declaration of 1917 when British promised the land under the Ottoman Control to Zionist group in return of financial support to their war efforts.

Apart from overt imperialist arrogance which this so-called peace proposal demonstrates, it is also very clear that the timing of the deal has something to do with domestic political challenges faced by both Donald Trump and Benjamin Netanyahu. Netanyahu was formally indicted on January 28 in a court in Israel after he withdrew his plea for immunity in the Israeli parliament, knowing very well that he does not have enough numbers in the Knesset to get the immunity.

It is likely that Netanyahu will not be able to come back to power after the March elections. The deal has been supported by opposition in Israel too. For Netanyahu this provides the best opportunity to leave a legacy of creating some form of permanent borders for Israel.

The US is going for an election in November this year and impeachment trials in the Senate are getting enough media attention to spoil his bid to get a second term. In this context any diversion of attention would be ideal for Trump.