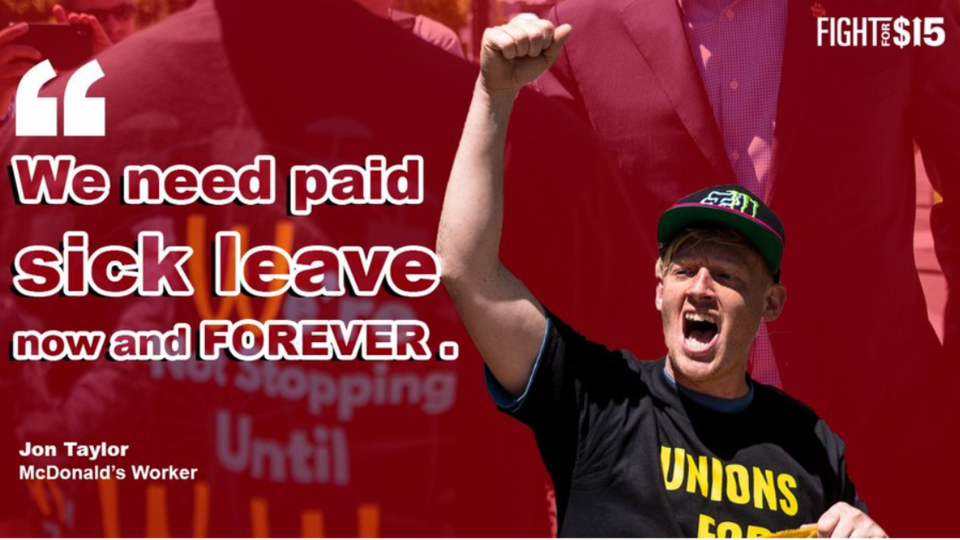 Workers at the multinational restaurant chain, McDonald’s, criticized the company’s limited paid sick leaves policy, in the midst of the Coronavirus disease outbreak in the US. McDonald’s so far has only offered extra paid sick leaves to workers either quarantined or in locations with higher incidence of infections.

This policy covers less than 5% of the stores, according to the Fight for $15 campaign that is currently leading a struggle of fast food workers for paid leaves in the US. McDonald’s workers in the state of Florida have been on strike, by refusing to turn up for work since March 12.

They have demanded an extension of their paid leaves to include the quarantine period or any kind of outbreak-related work disruptions for everyone who “wears the uniform”. The demands have included that the leaves be extended if a worker or anyone in their household were to show signs of an infection.

The demands also include wages for hours missed due to any kind of closures that might be required during the outbreak. Workers have also demanded that the company come up with a comprehensive prevention policy, and train the managers and workers alike to limit the possibility of infections among workers.

Worker health is public health. Amid the #CoronaPandemic, we’re demanding paid sick leave and $15/hr to ensure the safety and well-being of millions of low-wage and tipped workers and or families across the nation. #Fightfor15 pic.twitter.com/2YL2X14CGb

Florida fast-food workers are on strike, but doing it from home today instead of a big rally. Workers like us need paid sick leave, whether it’s a #coronavirus pandemic or simply having to take a family member to the doctor. #FightFor15 #UnionsForAll pic.twitter.com/0qXVWuOznk

In California, even as gig economy corporations such as Uber and Lyft have agreed to compensate their workers for lost wages due to quarantine or sickness, workers have demanded that more to be done to mitigate risks. Workers have recently petitioned California’s government to step in to protect them and their livelihoods during the epidemic.

Multiple unions have identified fast food workers and gig economy workers to be among the most risk-prone groups in the US, as they are more likely to be in contact with the general public. Even though the US has reported more than 2,800 infections and 59 deaths, from COVID-19, restaurant chains have been reluctant to support their workers.

As the Coronavirus pandemic is raging in the US, only 15% of the fast food workers have paid leaves left, leaving over 32 million workers without any. The gravity of the matter can be seen from the fact that president Donald Trump, who showered over a trillion dollars on the financial system earlier this week, had to admit that they are working on compensation for wages lost for hourly-wage workers during the outbreak.

Democratic Party’s presidential candidate Bernie Sanders has also come out in support of the struggling workers. In a recent tweet, Sanders admonished Whole Foods, an Amazon subsidiary, for asking workers to “share” their paid leaves during the outbreak.

Amazon paid $0 in taxes on $11 billion in annual profits. But it asks workers to “donate” their paid leave to others who are sick.

Workers and taxpayers are expected to be generous. Corporate CEOs—even during a pandemic—can be as stingy as they want. https://t.co/xsJLnxgVSa

Most hourly-wage workers in the US live from paycheck to paycheck. A disruption can set them back on their rent, basic utilities and even healthcare for their family. The outbreak has brought to the fore the simmering issues affecting millions of US citizens to the fore. Paid sick leaves for hourly-wage workers is set to be a nationally relevant issue even after the threat of the pandemic is contained.