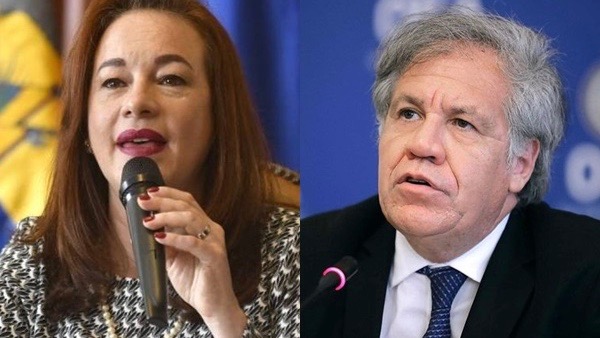 María Fernanda Espinosa will compete with Luis Almagro for the position of Secretary General of the OAS in the election scheduled for March 20.

The Organization of American States (OAS) is set to go ahead with its 54th special General Assembly tomorrow March 20 in Washington D.C. despite complaints raised by 13 member states of the body. Their central concern is over the fact that the Assembly will violate the sanitary and public health guidelines amid a serious global pandemic. The organization is set to elect its new secretary general and assistant secretary general in the Assembly.

The representatives argued that the session would contradict the health recommendations issued by the World Health Organization (WHO) to not hold large gatherings of people as well as the US and White House’s orders against gatherings of more than 10 to 50 people, measures that have been adopted across the globe to slow the spread of the novel coronavirus.

The signatories of the letter also raised concerns about the results of the election. They said that “there may not be a quorum; or the meeting would be regarded as lacking legitimacy with damaging and far-reaching consequences for the effectiveness of the Organization and its capacity to continue as a representative body of the nations of our Hemisphere.”

On Wednesday March 18, Mexico joined the 13 Caribbean nations in calling for the postponement of the Assembly and elections. Efraín Guadarrama, of the Secretary of Foreign Relations sent a letter to the President of the Permanent Council of the OAS echoing concerns over violations to sanitary measures amid the pandemic.

Meanwhile, the OAS in a statement issued on March 17 informed that it had invited the authorities from the United States Department of Health and Human Services (HHS) for the purpose of inspecting the Organization’s facilities. They declared that the corresponding authorities had accepted the invitation to disinfect the facilities to guarantee the safe condition of the rooms, to protect the health and well-being of the participants in the general assembly.

In the elections scheduled for this Friday, María Fernanda Espinosa, Ecuador’s former Foreign Minister and 73rd President of the United Nations General Assembly, will face off against Luis Almagro, the current Secretary General of the OAS. The member states will have the opportunity to vote to either re-elect or choose a new Secretary General for the next five years.

Espinosa’s candidacy was presented by Antigua and Barbuda and Saint Vincent and the Grenadines. While addressing the assembly last month, Espinosa promised to “evaluate with the States sensitive emerging issues before executing actions on behalf of the organization,” as well as to “heal the polarization of the OAS” witnessed during Almagro’s term.

Uruguay’s Almagro has been fiercely criticized by social movements and political organizations from across the Americas for promoting the United States’ imperialist interests against the progressive governments of the region. He has played a fundamental role in implementing and defending the US’ interventionist strategies such as the commercial and economic sanctions against Venezuela and the right-wing coup d’etat against Bolivia’s socialist president Evo Morales.

The US administration has been pressurizing its allies and other submissive governments of the region to vote in favor of Almagro. The far-right governments of Brazil, Colombia, Ecuador, Uruguay as well as the illegitimate representative of Venezuela (designated by the US puppet, Juan Guaidó) and that of the coup installed government of Bolivia, have expressed their support for Almagro. Additionally, the right-wing governments of Canada, Chile, Costa Rica, Dominican Republic, El Salvador, Guatemala, Haiti, Honduras and Paraguay have pledged to vote for Almagro.

Espinosa has the support of Argentina, Mexico, Nicaragua, Panama and the above mentioned 13 Caricom countries.

It remains to be seen who the government of Peru will support in the elections after withdrawing the candidacy of its ambassador Hugo de Zela for the same post on March 16.