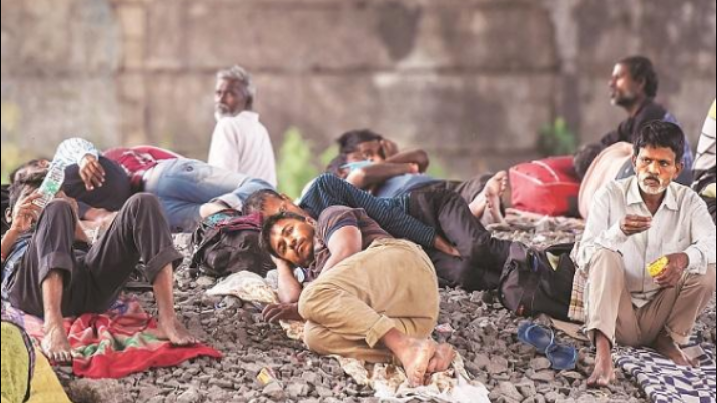 In India, those who eked out a living, whether in farming work or in factories or construction sites now sit idle and hopeless.

A deadly game of chess is being played out across India between death and the working class, much like the iconic Ingmar Bergman film, The Seventh Seal, set in 14th Century Europe reeling under the Black Death, as the plague epidemic was known then.

But, in India today, death is not just personified by the coronavirus. It is also the chaos that the Narendra Modi government’s strategy has spawned. Bergman created a masterpiece, an allegory for those ravaged times, but Modi is creating history by ravaging working people of the second most populous country in the world, and one of the poorest.

There are two parts to this tragic story of India under the COVID-19 cloud. One is how short-sighted, indeed callous policies have left millions without any earnings, dependent on food handouts and charity, stranded in hovels, subjected to humiliating brutality by the police and administration and an uncertain future. Babies are being delivered in huts because hospitals and dispensaries are inaccessible. TB patients and heart patients alike are awaiting attention without treatment. Children are whiling away time in the heat and dust as schools – and mid-day meals – are closed.

Those who eked out a living, whether in farming work or in factories or construction sites now sit idle and hopeless. And, of course, thousands of migrants are stranded in distant slums, while many perished on the trek back home.

All this was avoidable – only if the Modi government had thought of the laboring poor when planning dramatic lockdowns and deploying police forces to implement it, besides giving homilies on TV. But, for his government, the workers don’t matter. The pain and misery of workers was conveniently categorized as a ‘sacrifice’ in order to break the chain of virus transmission, for the good of all Indians. It was projected as a transitory phase, an agonizing moment that would soon pass.

But it is the other part of the story that is more lethal and long lasting. This is the way labor is being turned into a mere pawn, an instrument of production – and profit – with no rights, no entitlements, no needs, except to keep his or her skin joined to the bones.

Simultaneously, the truculent corporate sections are being given ever larger concessions to keep their bottom lines afloat. Let us turn to this second part of the ‘Modi-creating-history’ story, a part that is often ignored but as often lauded by the middle class intelligentsia, and of course, the mainstream media, especially TV channels.

The Modi government had been pushing for changing the whole relationship between employer and employee in India for quite some time. It had brought in four labor Codes, which subsumed 44 separate laws relating to labor that were passed over the past century in order to protect the weaker section – the working class – from the dominant and stronger employers’ class. These new codes are winding their way through parliament, but are facing stiff opposition from trade unions.

In the pandemic and ensuing lockdown, Modi and the ever alert corporate class saw a golden opportunity. They perceived that code or no code, workers were hamstrung in the lockdown, they couldn’t gather and protest, they couldn’t strike – and the government in any case had armed itself with sufficient legal firepower to quell any such opposition.

Loss of Wages and Jobs

The first inkling that the Modi government was decidedly standing with the employers and not with workers came immediately after the lockdown was announced (March 24). Despite directives (or advisories) issued by both, the labor secretary and home secretary that no worker should be removed from service or wages cut, and the prime minister himself having reiterated the same, thousands of workers were thrown out by employers across the country. They were told that factories were now shut, and that they had to fend for themselves. The government did not lift a finger to strictly implement its own orders, except where unions put pressure. Clearly, its orders were mere pieces of paper, meant for propaganda only.

Then, at the beginning of April, when earned wages for March became due, employers almost to the last, cut wages for the lockdown period beginning March 24. This was again a direct violation of the orders. And, again the government did nothing.

The situation will come to an explosive head in a few days as wages for April become due, and despite the lockdown, employers are supposed to pay up – something that they will surely avoid.

There is a distinct possibility that the two pending Labour Codes – on Industrial Relations and on Occupational Health, Safety and Working Conditions – will be issued as ordinances, says Tapan Sen, general secretary of Centre of Indian Trade Unions (CITU), one of India’s biggest trade unions. The government has been increasingly adopting this short-cut route, and the pandemic provides them with the opportunity of pushing these through.

This would open the way for many significant changes in the employer-employee relationship, including a key demand of the corporate section: increasing the number of hours per work day.

So, it has now been proposed – as yet not officially – that the working day itself may be increased to 12 hours instead of the global standard of a maximum of 8 hours. Wages for extra hours will not be at double rate, as laid down by earlier laws. These will be paid on pro rata basis. So, workers will lose wages and also work themselves senseless – so that the employers’ profit is not affected.

The State governments of Gujarat and Madhya Pradesh have already issued notifications increasing the work day to 12 hours, Sen said, and others may follow suit soon.

Note, that this also means an effective reduction in workforce. Less workers, same work: that’s bourgeois heaven. This, at a time when unemployment has been rather conservatively estimated by the Centre of Monitoring Indian Economy or CMIE sample survey at a staggering 23.7%. Rather than employ more workers, corporate bigwigs prefer to squeeze out more from lesser number of workers.

Atomization of workforce – work from home

One consequence of the lockdown, not just in India but the world over, has been the institutionalization of work from home. Naturally, all work cannot be done from home, but many of the services sector jobs can be. This saves the employer enormous overhead costs (office maintenance, utilities, etc.) and, more importantly, worsens the collective bargaining power of the employees. They can even be defined as individual contractors, asked to do a particular job for a consideration.

The employer becomes free of any responsibility of social security, job security and any other benefits usually given to regular employees. Already in India, a large number of employees in media houses, IT/ITeS sector, financial services, etc. are working from home because of the lockdown. This has prepared the ground for establishing the system permanently.

The government strategy for dealing with the pandemic, too, reeks of the same approach. Without ensuring the safety of workers, without preparing to meet any potential demand on healthcare facilities, the government has said that industries can start opening in certain areas, after the administration weighs the COVID-19 status there.

This is a bitter-sweet solution for workers because they look forward to start earning again yet they will be unsafe and unprepared as far as the virus is concerned. The government is advancing the workers as pawns in the game, ready to be sacrificed. What should have been done was to make it mandatory to provide protective gear, set up health centers, and testing facilities in industrial areas where reopening was permitted. But who cares if workers die?

The same applies for industries exempted from lockdown. While much praise is showered on service providers (and rightly so) workers in industries are also risking their lives when going to work. Yet, they are not heroes.

There is a pushback coming

Despite the difficult times, there is a simmering discontent that is gathering strength throughout the country. It became first visible on the Protest Day called by CITU and supported by several farmers, women’s, students and youth organizations on April 21. Reports suggest that it was observed far and wide, mainly in working class areas, and some other places too.

But as time passes, as food runs out in kitchens, debts mount, as daily earners are pushed to the brink, the gathering storm of anger will definitely break open. Unfortunately, most of the opposition forces in the country are too demoralized and clueless on how to defend the people in this dark hour.

It is only the Left forces that have taken the initiative, both in providing relief to suffering people, and in raising the voice of resistance. Even in terms of administrative response, the Left has been in the forefront, with its government in Kerala being applauded the world over for dealing with the pandemic while caring for the people. So, the Left will yet again lead the fight to defend the people – both from the virus, and from Modi government’s devastating policies. It won’t end like the Bergman film, where Death ultimately triumphs.