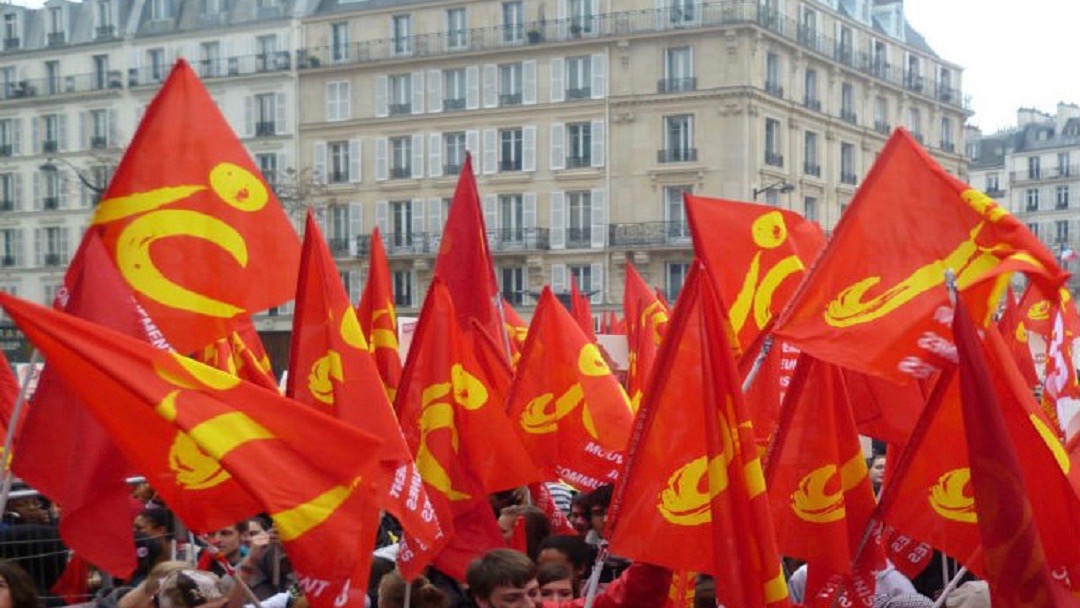 Mouvement Jeunes communistes de France (MJCF) or the Jeunesse Communiste (JC) is a member of the World Federation of Democratic Youth(WFDY).

France has been going through turbulent times marked by widespread protests from organized and unorganized sectors of the working class against the neoliberal economic policies of the government under Emmanuel Macron. COVID-19 has hit the country in the midst of this crisis, with the working class sections of French society now braving both the pandemic and Macron’s neoliberal capitalism. Léon Deffontaines, general secretary of Mouvement Jeunes Communistes de France (MJCF), talks to Peoples Dispatch regarding the plight of the working class in France and the resistance against Macron’s regime and the COVID-19 crisis.

Peoples Dispatch: How has France been impacted by the COVID-19 pandemic? How effective was the response of the French government to the crisis?

Léon Deffontaines: This crisis was hard to predict. Numerous countries throughout the world have found themselves rapidly overwhelmed. It is particularly the case of a lot of countries in Europe, including France. In a matter of a few weeks or even a few days, France has become one of the hotbeds of the global pandemic. As of today, no one seems to be able to say why some European countries have been more impacted than others. For example, why has Greece been less affected than Italy?

However, one thing is certain: the capacity of reanimation units in public hospitals, the quantity of masks and sanitary material and, above all, detection tests have an undeniable impact on the mortality rate and contagiousness of the virus. France was clearly not prepared to face this virus. The fault lies in the austerity policies that have been put in place these last years. From the beginning of the lockdown (confinement), the lack of masks has been felt, ventilators rapidly started running short in some hospitals which quickly became saturated. This forced medics to choose between patients who could be placed under ventilators and those who could not be based on their chances of survival. The French government has not lived up to its responsibilities and bears a great responsibility for the size of the crisis in the country.

Still today, after a month and a half of lockdown, we don’t have enough supplies, not enough detection tests to use them on a large scale. This lack of supplies has had a very heavy impact on retirement homes. Elderly people could not be tested and, in some of these institutions, 70% of residents were infected. A lot of deaths could have been avoided.

PD: The French working class was on the streets for months protesting against Macron’s pension reforms. Along with the hardships inflicted by the months-long strike, the COVID-19 pandemic has also taken a toll on workers’ lives. What is your take on this and what have been the responses from the working class? Has the government offered any relief package for workers?

LD: The working class has been much more impacted by the virus, which is highlighted by the fact that since the beginning of the pandemic, the working-class neighborhoods have registered higher death tolls. For example, in the cities of Seine-Saint-Denis, in the suburbs of Paris.

There are various explanations for this. The first is that the austerity measures and the destruction of public services have been more deeply felt in these neighborhoods. As a matter of fact, the capacity in hospitals is much lower as compared to the population. These hospitals are also less equipped with machines and materials. Secondly, despite declaring lockdown, Emmanuel Macron chose to leave some businesses open, even though they were non-essential to guarantee the safety and survival of the population. It is the very inhabitants of these areas, the working class, who have to work in these businesses and are thus much more exposed than the rest of the population, even more since the bosses do not always comply with safety measures.

They suffer a “double penalty”: they are more exposed to the virus because they are forced to work and at the same time don’t have access to sufficient capacities in hospitals.

The first demand of MJCF, PCF, and unions is that non-essential sectors of the economy be shut down. Lockdown has to be stronger. Secondly, the people who have to work must be given adequate sanitary equipment: masks, hydro-alcoholic gel, etc. Finally, a large-scale testing plan must be put in place, to detect, isolate, and cure those who are sick more efficiently.

Regarding the workers who work in non-essential sectors, they must be placed under partial-unemployment assistance. For now, the government proposes to replace the salaries to a rate of 84%. We demand it be 100%.

PD: Doctors and staff in the emergency departments were also on strike for a long time demanding adequate funding, facilities and staff. Did the French government address those concerns before COVID-19 hit the country? In your opinion, is France fighting COVID-19 with an underfunded, under-equipped, under-staffed medical sector?

LD: It has been several years now that the hospital sector is suffering due to the implementation of austerity policies. These policies have worked to slowly destroy the public hospital sector in the country and they have been greatly accelerated since Emmanuel Macron took office. In only six years, close to 18,000 beds have been suppressed, more than 4,000 in the year 2018 alone. Along this shortage of beds, hospital workers also denounce the lack of materials, which is insufficient to provide quality treatment.

The effects of these policies did not wait for the virus to make themselves felt. The deterioration of working conditions has been steadily denounced for years and several collectives directly addressed the government and the president. Emmanuel Macron is now pretending to be discovering that there is a crisis in public hospitals, a crisis in which he bears a great responsibility. The alarms were numerous but only met with disdain.

Now, with the pandemic, the lack of supplies and materials is even more deeply felt. Many medics and health personnel are left powerless. Testimonies multiply on this situation: lack of ventilators, masks, clothes. Yet the health workers are showing great courage. They are risking their lives to save that of others. Unfortunately, some of them caught the virus because of this lack of equipment and some have died from it.

PD: What have been the implications of the lockdown for the youth and students in the country? What is their response towards this emergency?

LD: Some students were able to go back to their families before the lockdown, but it is not the case for all of them. Some remained stuck in their students’ residences. This particularly is the case of foreign and overseas departments’ students. These students are now confined in small, sometimes substandard rooms. Some have lost their income. More and more, they resort to solidarity collectives to eat. We had to wait for a month before Macron decided to act and give assistance to these students, and assistance which remains insufficient.

As for the youth who are in schools, the government put in place what it called “pedagogic continuity”. The goal was to be able to continue school programs through video-conferences, so as not to fall behind. The problem is that not all youth have access to digital devices or the internet. The government itself evaluates that close to one million youth have been “lost”, while unions estimate it is 50% of them. This will to pursue classes through digital means aggravates educational inequality.

We in MJCF demand a catching-up plan for education as soon as lockdown ends. For this, we demand the opening of new classes and new teachers’ positions.

PD: What is your take on the role played by the EU in tackling this crisis? In your opinion, how vital has international solidarity been in the fight against COVID-19?

LD: We are going through a planetary crisis. The time must be of solidarity between people. However, from the start of the pandemic, the EU has been absent. It is unable to solve the crisis. The different EU members have themselves chosen to disregard the EU rules on budgetary deficit and debt. But worse, no policy has been put in place to develop solidarity between member-states. We witnessed absurd situations where these states stole medical equipment from each other. The EU is showing all its deficiencies.

What is happening in the EU contrasts sharply with what is occurring in other places. This particularly is the case with Cuba which, despite the US-imposed blockade, sends medics through the world to fight the virus. Cuba even sent medics to EU countries, and a law was approved a few weeks ago in the French parliament to allow Cuban health workers to come to [French colonies] such as French Guiana, Martinique or Guadeloupe. No other EU country has sent as many doctors to Italy as Cuba has done.

The crisis lifts the veil on what constitutes the bedrock of our society. While the pandemic is now planetary, we see different behaviors appear, based on different political models. The comparison between the EU and Cuba must make us think about the society we are currently living in, but above all, about the one we want for tomorrow.

PD: What are the proposals and initiatives of the French left and the MJCF to address the COVID-19 crisis?

LD: We must draw lessons from this crisis. We already knew the neoliberal model did not answer to human needs and those of the planet, but the realization that it is leading us straight to the wall is now widely shared by the French people.

In the face of this, we must be a proposition force. This is why MJCF and PCF demand that after lockdown there be a great financing plan for public services, starting with the health sector, and extending to education, transportation, energy, etc. These sectors are too important to be left to the private sector. They all must answer to the same and only principle: general interest.

In addition to the health crisis, an economic one is coming. The youth today is facing extreme employment precarity. Employment is degraded and fragmented by a number of derogation contracts. Short-term contracts and part-time jobs are overrepresented. Through these contracts, the youth is used as an adjustment variable by capital. In order to safeguard employment, particularly among the youth, the government must take strong measures, at least incorporating youth in the general legislation on work.

We are not out of the crisis yet, not even of the lockdown, but we must already analyze what is happening and the impact of neoliberal policies on our society. We must draw all the lessons from this crisis and, when the lockdown is over, we will have a whole world to reinvent.