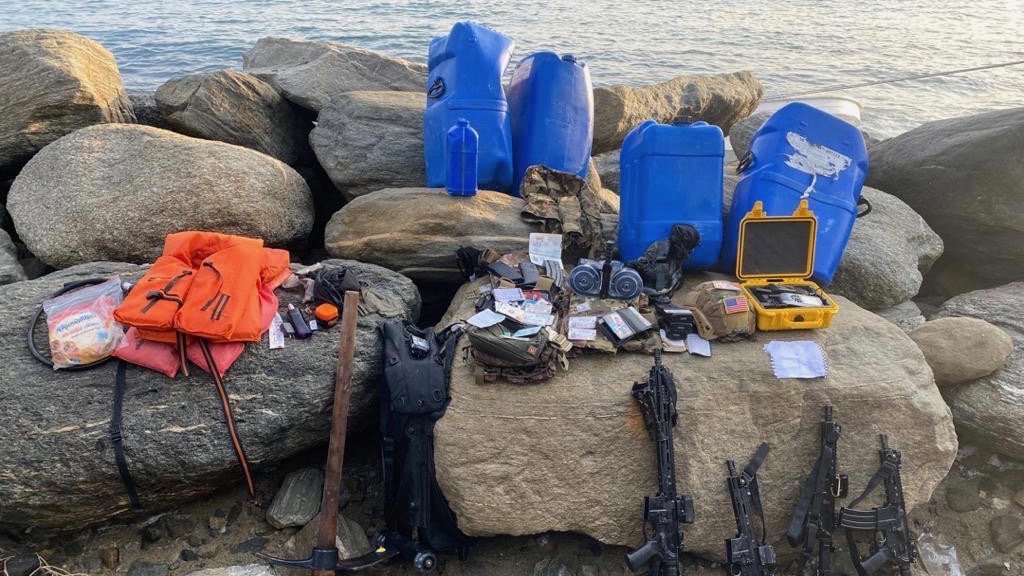 Venezuelan security forces seized large amounts of war weaponry including assault rifles and ammunition as well as satellite phones, uniforms and helmets with the US flag from the group of mercenaries.

In the confrontation, eight mercenaries were killed and two were detained, one of whom has confessed to being an agent of the Drug Enforcement Agency of the United States. Venezuelan security forces also seized large amounts of weaponry, including assault rifles and ammunition, as well as satellite phones, uniforms and helmets with the US flag.

Authorities in Venezuela strongly denounced the latest attempts to violate the country’s sovereignty and peace. They also declared that the attack was clearly coordinated between the US and Colombian governments with the support of and financing by drug traffickers.

Néstor Luis Reverol Torres, the Minister of the People’s Power for Interior Relations and Justice of Venezuela, spoke on National TV a couple hours after the attempted invasion to officially inform the nation about the events. He said that the terrorist group had sought to carry out selective assassinations to “unleash a spiral of violence and generate chaos in the population.”

The president of the National Constituent Assembly, Diosdado Cabello, held a press conference at midday to discuss the attack. He heavily criticized the Venezuelan opposition that in partnership with the US has resorted to more and more desperate measures in order to achieve their political goal of overthrowing Nicolás Maduro. He declared, “We have defeated them in the streets, electorally, and militarily… That is why they have put their hope in a high level military operation.” However, the response to these attempts to destabilize Venezuela has been and will continue being, “Bolivarian Fury,” he said.

Minister of defense Vladimir Padrino López announced in a press conference that, “The National Bolivarian Armed Forces rejects from its heart, its soul, this imperialist attack,” and that the FANB is in a state of rebellion and permanent alert against imperialism.

The attempted invasion was denounced by social movements and organizations across the world.

Dr Francisco Dominguez, the national secretary of the Venezuela Solidarity Campaign in the United Kingdom, condemned today’s attack and the long series of attacks against the Bolivarian Republic over the past couple years. He highlighted the fact that “in almost every case, the investigation trail leads to Colombia, and Washington.” He said, “This is no surprise since the heavily US-subordinated Colombian government of Ivan Duque and that of President Trump have made explicit repeatedly their intention to bring about ‘regime change’ in Venezuela. The Venezuelan government has repeatedly denounced the existence of military training camps for these terrorists in Colombian territory with the acquiescence and complicity of the Colombian authorities. Not once, in 20 years of Bolivarian government, has Venezuela carried out any type of aggression whatsoever to either Colombia or the United States.”

The Network in Defense of Humanity, a network of intellectual, artists and social movements across the world, rejected the attack and stated, “It would be good of the empire to worry more about the tragic reality that the North American people suffer with the uncontrollable rise of the COVID-19 pandemic that has essentially been caused by the irresponsibility of the Trump administration.” They emphasized that, “the Venezuelan people have the right to live in peace.”

Colombian social movement Congreso de los Pueblos, the People’s Congress, denounced the attack and specifically how Colombia is used as a pawn to perpetrate attacks against Venezuela. In the statement they declared: “We completely reject the agenda of permanent aggression against the Bolivarian Republic of Venezuela. We completely reject that Colombia continues to be used as a launching point to allow aggression against this people and any people in the world.” They also rejected that “through media, and through economic, political and military means, Colombian land and people, are used for imperialist benefits and by powerful capitalists.”