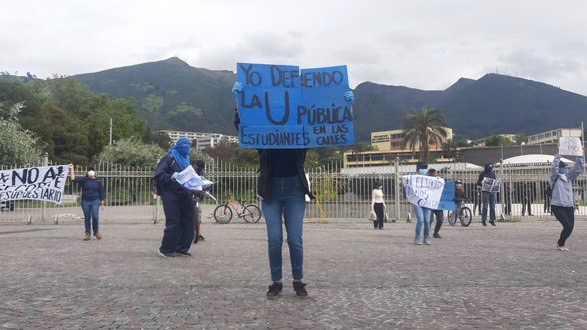 Despite the lockdown due to the novel coronavirus, over 300 people demonstrated at the Central University of Ecuador in Quito against the budget cuts in the public higher education sector on May 5. Photo: Denisse Herrera/teleSUR

Hundreds of students, professors and workers of the Central University of Ecuador, in the capital Quito, mobilized outside the university campus on May 5 to reject the huge budget cuts in the public higher education sector.

On May 3, the neoliberal government of President Lenín Moreno announced a cut of around 100 million USD in the sector in order to face the economic crisis aggravated by the spread of the COVID-19 pandemic in the country.

Despite the lockdown due to the novel coronavirus, over 300 people, wearing masks and maintaining social distance, gathered at the university demanding that the national government withdraw the announced austerity measure. They marched a few blocks to the Ecuadorian House of Culture, but were stopped by the National Police.

“If there is no education, there is no health”, “The lockdown does not shut us up”, “No to budget cuts”, “I defend public university, students on the streets”, “Education defends itself”, etc. read some of the posters carried by the protesters. The demonstrators also shouted anti-government slogans and banged pots and pans.

Since May 4, several educational institutions have been expressing their disagreement with the measure, arguing that the cut will mainly affect research and knowledge generation.

The Federation of University Students of Ecuador (FEUE) deemed the measure as unconstitutional and stressed that education and scientific institutions are of vital importance in facing the coronavirus outbreak.

The Central University of Ecuador itself said in a statement that this action constituted an attack and that carrying it out would lead to “dismissal of teachers and administrative staff, which would affect academic development, research and the production of scientific knowledge.”

The National Polytechnic School (EPN) also expressed its concerns about the decline in its budget. The EPN described the decision as “unilateral and not consulted”, and said that the measure would impact the payrolls of teachers and employees.

The Confederation of Indigenous Nationalities of Ecuador (CONAIE), the largest Indigenous organization in the country, also rejected the measure and denounced its implementation in the midst of the health emergency.

Ecuador is one of the Latin American countries hardest hit by the coronavirus disease with 31,881 confirmed cases, 1,569 deaths and 3433 recoveries as of May 6.

Moreno’s neoliberal policies which oversaw cuts to the healthcare system and the prioritization of the payment of foreign debts, have had disastrous effects on the country’s capacity to respond to the COVID-19 pandemic. The piling up of the dead bodies of coronavirus victims in Ecuador’s second largest city, Guayaquil served as gruesome evidence.

In the beginning of March, when the spread of the coronavirus was under control in the country, Moreno announced a neoliberal package of economic reforms to deal with the country’s critical situation generated by the pandemic. At that time, social movements and citizens denounced that the government was using the health crisis as a pretext to implement austerity measures aimed to favor the International Monetary Fund’s (IMF) agenda in the country.

In this regard, the recent budget cut in public education looks like another move of the national government to please the IMF.