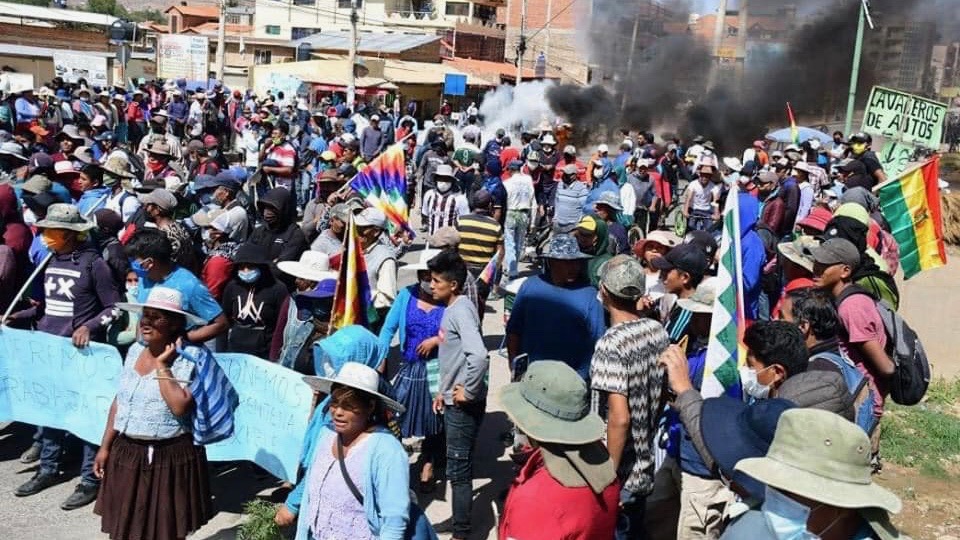 Protests against Bolivia's regime have entered the third day, in Cochabamba. Those from the working-class districts in the south are now marching towards the city center. Photo: Kawsachun News

Since May 11, hundreds of Bolivians have been mobilizing against the coup-installed government led by far-right Jeanine Áñez and its mismanagement of the health and economic emergency caused by the COVID-19 pandemic. In response, the de-facto government has deployed police and military forces in the working-class neighborhoods of La Paz, El Alto and Cochabamba to suppress these anti-government protests.

Former Bolivian President Evo Morales has condemned the interim government for this extreme measure. “Tanks in the streets, military in the neighborhoods, warplanes in our skies, exposing soldiers to the virus without any consideration. All with the desire to intimidate the people. Let no one forget: Bolivia has always defeated dictatorships,” said Morales in a tweet on May 12.

In the capital La Paz, and in the cities of El Alto and Cochabamba, among others, Bolivians denounced the de-facto government for not providing food or economic aid to those who have lost their sources of income due to the lockdown. The protesters said that they can no longer endure the lockdown without food and drinking water. They demand that the government ease quarantine measures so that they can work, arguing that the strict isolation measures might save them from the coronavirus disease but they will starve them to death.

Protesting citizens also demanded Añez’s removal from office and called on the Supreme Electoral Court (TSE) to set a date for general elections in the country.

They also expressed their rejection of the recent authorization of the use of genetically modified seeds as well as of the intensification of the restrictions on press freedom in the country. People banged utensils to manifest their discontent and broadcast the demonstrations live on social media to draw attention to the media blackout imposed by the regime.

Protesters in Cochabamba, Bolivia, explain how they've been left hungry by the coup regime during the quarantine. pic.twitter.com/nSd6f9mQCJ

On May 11, the police and army officials violently repressed a peaceful protest in the working class district of K’ara K’ara in Cochabamba city. The security forces violently attacked the demonstrators, used tear gas to disperse the gathered crowd and shot rubber bullets against them, injuring several people.

Despite the brutal repression, the citizens of the district took to the streets the next day to continue demanding respect for their human rights and manifesting their disapproval of the coup regime.

On May 7, the de-facto government passed a decree which permits the use of genetically modified seeds for five crops: corn, soy, wheat, sugar cane and cotton. The decree has been met with rejection across sectors.

The Coordinator of the Six Federations of the Tropic of Cochabamba rejected the Supreme Decree 4,232 in a statement released on May 12.

The organization denounced that the de-facto president has gone beyond her powers as an interim official, violating the country’s constitution. The federations warned that this will allow for the use of glyphosate, an agrotoxin used in about 85% of genetically modified crops and is very harmful to human health.

The People’s Ombudsman office also denounced that the decree is not only unconstitutional but violates the right to food security of Bolivians.

The Indigenous communities of the department of Potosí, joined in the rejection of the decree and demanded the immediate abolition of the same. They also demanded compliance with the 2020 General Election Postponement Law.

On May 7, Supreme Decree 4,231 was issued by the government and made public on May 10, on Bolivian Journalist Day. It provides an amendment to two previous decrees, and establishes that criminal proceedings will be undertaken against anyone who disseminates information that endangers public health and generates uncertainty in the population.

On March 10, President Morales condemned the decree, which many allege to impose new limitations on freedom of expression in the country. “The de-facto government of Bolivia every day further deepens human rights violations. Now, it has passed a decree that extends restrictions, aggravates sanctions against freedom of expression and ‘written, printed and artistic’ information and considers their violation as a criminal offense,” Morales wrote in a tweet.

Many political leaders said that the regime is using the pandemic as a pretext to threaten journalists and criminalize the voices of dissent.

Edison Lanza, Special Rapporteur for Freedom of Expression of the Inter-American Commission on Human Rights (IACHR), in an interview said that “the use of criminal law for expressions of public interest is not compatible with the Inter-American system. Disinformation is fought with access to public information not with jails.” He also stressed on the importance of press freedom in the times of pandemic as well as the elections.

As of May 12, there are 2,964 confirmed cases of coronavirus infection in Bolivia, with 128 deaths.