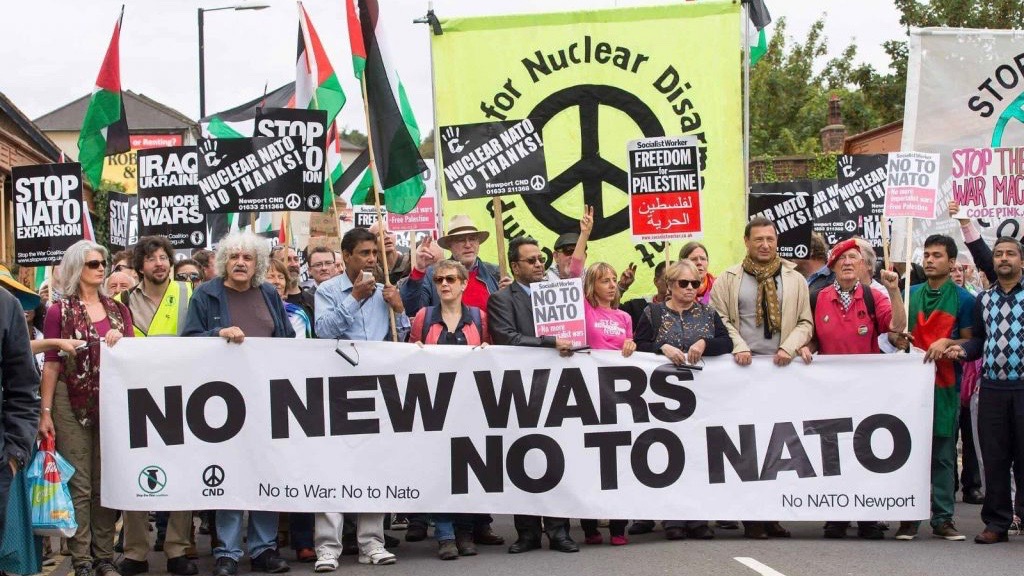 While US and other imperial powers continue to ramp up militarization, the international movement against militarism is even more important.

On March 15, 1950, the World Peace Council sent out the Stockholm Appeal, a short text that called for a ban on nuclear weapons and that would eventually be signed by almost 2 million people. The appeal was made up of three elegant sentences:

-We demand the outlawing of atomic weapons as instruments of intimidation and mass murder of peoples. We demand strict international control to enforce this measure.

-We believe that any government which first uses atomic weapons against any other country whatsoever will be committing a crime against humanity and should be dealt with as a war criminal.

-We call on all men and women of good will throughout the world to sign this appeal.

Now, 70 years later, the nuclear arsenal is far more lethal, and the conventional weapons themselves dwarf the atom bomb that was dropped by the United States on Hiroshima and Nagasaki in 1945. In 1950, there were 304 nuclear warheads (299 in the United States), while now there are 13,355 warheads; and each of the 2020 warheads is far more destructive than those from the early years of this terrible technology. Something like the Stockholm Appeal is imperative now.

To call for a ban on weapons of mass destruction is not an abstract issue; it is one that points directly toward a bloc of countries, led by the United States of America, that is stubbornly persisting in using force to maintain and extend their global dominance. In the midst of this global pandemic, the United States threatens to deepen conflicts with China, Iran, and Venezuela, including moving a naval carrier group to effectively embargo Venezuelan ports and moving ships into the Persian Gulf to challenge the right of Iranian boats to international waters; meanwhile, the United States has said it will position aggressive missile batteries and anti-missile radar arrays in a ring around China. None of these countries—China, Iran, and Venezuela—have made any aggressive move against the United States; it is the United States that has imposed a conflict on these countries. If an appeal is to be drafted now, it cannot be made in an anemic, universal fashion. Any call for peace in our time must specifically be a call against the imperialist warmongering that emanates from—but is not only authored by—Washington, D.C.

Our assessment of the imposition of a state of a war by the United States relies upon four points:

1. The United States already has the largest military arsenal and the widest military footprint in the world. According to the most recent data, the U.S. government spent at least $732 billion in 2019 on its military; we say “at least” because there are secret disbursements of funds to the massive intelligence wings that are not publicly available. From 2018 to 2019, the United States increased its military budget by 5.3 percent, the amount of which is the same as the total German military budget. Almost 40 percent of global military spending is done by the United States. The United States has a combined total of more than 500 military bases in almost every country on the planet. The United States Navy has 20 of the world’s 44 active aircraft carriers, while other U.S. allies have 21 of them; this means that the U.S. and its allied states have 41 of the 44 aircraft carriers (China has two and Russia has one). There is no question about the overwhelming superiority of U.S. military force.

2. Yet, the United States is now using its full ability to expand its nuclear and conventional domination into space and into cyber-warfare with its Space Command (re-established in 2019) and Cyber Command (created in 2009). The United States has developed an interceptor ballistic missile (SM-3) that it has tested in space, and it is testing such fanciful weapons as particle-beam weaponry, plasma-based weaponry, and kinetic bombardment. In 2017, Trump announced his government’s commitment to such new weaponry. The U.S. government will spend at least $481 billion between 2018 and 2024 to develop new advanced weapons systems, including autonomous vehicles, counter-drones, cyber-weapons, and robotics. The U.S. Army has already tested its Advanced Hypersonic Weapon that can travel at Mach 5 (five times the speed of sound), so that it can reach any place on earth within an hour; this weapon is part of the U.S. military’s Conventional Prompt Global Strike program.

3. The U.S. military complex has advanced its hybrid war program that includes a range of techniques to undermine governments and political projects. These techniques include the mobilization of United States power over international institutions (such as the International Monetary Fund and the World Bank, and the SWIFT wire service) to prevent governments from managing basic economic activity, the use of U.S. diplomatic power to isolate governments, the use of sanctions methods to prevent private companies from doing business with certain governments, the use of information warfare to render governments and political forces to be criminals or terrorists, and so on. This powerful complex of instruments is able—in the plain light of day—to destabilize governments and to justify regime change.

4. Finally, the U.S. government along with its NATO partners as well as U.S. and European weapons manufacturers continue to flood the world with the deadliest weapons. The top five arms exporters (Lockheed Martin, Boeing, Northrop Grumman, Raytheon, and General Dynamics) are located in the United States. These five firms alone account for 35 percent of the top 100 of the world’s arms dealer sales in 2018 (the most recent figures); the total U.S. arms sales account for 59 percent of all arms sales that year. This was an increase of 7.2 percent over the U.S. sales in 2017. These weapons are sold to countries that should instead spend their precious surplus on education, on health, and on food programs. For example, in West Asia and North Africa, the greatest threat to the people is not only the terrorist in his Toyota Hilux, but it is also the arms dealer in the air-conditioned hotel room.

The Stockholm Appeal is now obsolete. A new appeal is needed. We developed it while we were discussing it in Bouficha, Tunisia; let’s call it the Bouficha Appeal.

We, the peoples of the world:

– Stand against the warmongering of U.S. imperialism, which seeks to impose dangerous wars on an already fragile planet.

– Stand against the saturation of the world with weapons of all kinds, which inflame conflicts and often drive political processes toward endless wars.

– Stand against the use of military power to prevent the social development of the peoples of the world, to allow countries to build their sovereignty and their dignity.

Abdallah El Harif is a founder of the Democratic Way (Moroccan radical left party); he was its first national secretary and is now the deputy national secretary in charge of international relations. El Harif is an engineer who studied at Mines ParisTech. He was a member of a clandestine Moroccan organization that fought against the dictatorship of King Hassan II; for his role in the fight for democracy and socialism, El Harif was imprisoned for seventeen years.