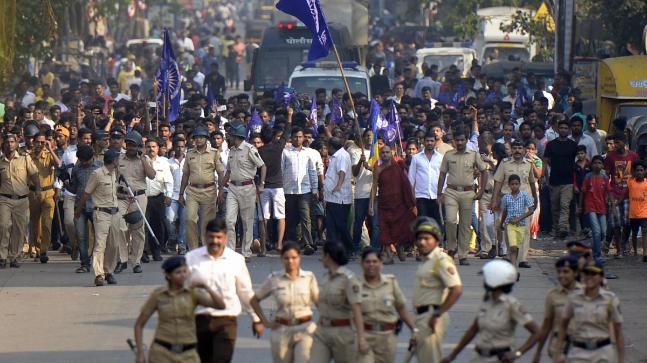 June 6 marks the second anniversary of the arrest of activists as part of the Elgar Parishad case in India. The case has been a dangerous instance of how dissent is being persecuted by India’s current far-right wing government led by prime minister Narendra Modi of the Bharatiya Janata Party.

On June 6, 2018, five activists were arrested for allegedly having participated and organized a series of violent clashes following a mass mobilization in the city of Pune on December 31, 2017. While the violence that occurred was carried out by Hindu right-wing groups, the police had constructed a narrative that those responsible for the clashes had links to banned Maoist militants.

Quickly, the police and state and national government began to spin a web of lies and false accusations with full support from the media to vilify and criminalize these activists who were all active in the struggle for the rights of oppressed communities in India.

Today, 11 activists are still in jail in connection with the case and continue to fight tirelessly for their release, especially given the threat of COVID-19. The case is complicated but it reveals volumes about the current state of persecution and repression in India against the left and all those who dare to dissent. We provided the following timeline in order to understand what is the status of the case today and its historical roots.

January 1, 1818: The battle of Bhima Koregaon between Peshwas (Brahmins) and British contingent made up of Mahars (Dalits or oppressed castes), Muslims and others.

1928: First commemoration celebration is held at the site by B. R. Ambedkar as a sign of assertion by Dalits, who had been oppressed by the Peshwas for centuries.

May 2014: The Bharatiya Janata Party (BJP)-led government comes to power at the Centre in May 2014 and in the State of Maharashtra, where the Bhima Koregaon site is located, in October 2014. The BJP is the political wing of the Hindu supremacist, semi-fascist organization – the Rastriya Swamsevak Sangh (RSS). The RSS believes in the idea of Hindutva which dictates that the caste system is an essential institution of Indian society.

February 16, 2015: Assassination of Govind Pansare, veteran communist leader and anti-Hindutva activist by unknown assailants suspected to be associated with Hindu-right wing units. State police have so far failed arrest anyone in the murder.

December 31, 2017: Elgar Parishad meeting of progressive forces is held to commemorate 200 years of Bhima Koregaon and take a pledge against the religious bigotry propagated by the BJP government.

January 2 and 3 2018: Massive demonstrations and strikes are organized all across Maharashtra by the Dalit and progressive organizations. The protesters are attacked by the Police and RSS-affiliated thugs, leading to several injuries and death of one 16-year-old Dalit boy named Yogesh Prahalad Jadhav.

January 2, 2018: FIR against Sambhaji Bhide and Milind Ekbote for inciting violence on January 1. Sambhaji Bhide, considered close to the prime minister and ruling BJP, has not been arrested yet.

January 8, 2018: A complaint filed by an individual businessman, Tushar Damgude, a self-proclaimed “nationalist” is converted into a FIR according to which “Leftist groups with Maoist links” who spoke at Elgar Parishad instigated the violence on January 1-3. This FIR became the basis on which Pune police hatched a “conspiracy theory” according to which the violence was the part of the larger plan to assassinate prime minister Narendra Modi. Several other FIRs were lodged by the police against different participants in the meeting.

14 March 2018: Milind Ekbote is arrested after intervention by the Supreme Court in February which comes after a complaint was filed alleging that the Maharashtra government was shielding him.

18 April 2018: Raids are held all across the country on the homes belonging to seven activists who had participated at Elgar Parishad meeting. The seven were identified as Rona Wilson, Surendra Gadling, and Sudhir Dhavale, Harsali Potdar, Jyoti Jagtap, Ramesh Ghaichor and Dipak Dhengle, members of Kabir Kala Manch, a Dalit and revolutionary cultural group,

19 April 2018: Milind Ekbote, one of the prime accused in the violence against Dalits in January ,is released on bail.

22 April 2018: Puja Saket, one of the witnesses of the right-wing violence in January, is mysteriously murdered.

April-June, 2018: Massive campaigns are carried out by right-wing groups with the help of the media to establish the conspiracy theory according to which Maoists plotted to kill prime minister Narendra Modi.

28 August, 2018: Homes of nine activists are raided and five of them are arrested by the Pune police in coordination of other police forces under the UAPA. The arrested include Sudha Bharadwaj, the national secretary of People Union for Civil Liberties (PUCL), senior ideologue and poet Varavara Rao, lawyer Arun Pereira and academic Vernon Gonsalves and writer and human rights activist Gautam Navlakha. They are all kept under house arrest for a while before four of them are imprisoned in October-November 2018. Navlakha gets interim relief from the court.

October-November 2019: Elections in Maharashtra. BJP loses the elections and a new coalition government comes to power. The government expresses intention to revisit the Bhima-Koregaon case.

14 February 2020: The Bhima Koregaon is was shifted to the National Investigation Agency (NIA), a federal agency which directly reports to the central government. Maharashtra government alleges it was not consulted before the move which gives the central BJP government complete control over the case.

April 2020: Despite the coronavirus-related lockdown and fear of the spread of COVID-19, the Supreme Court of India declines extension of interim relief from arrests to activist Gautma Navlakha and scholar Anand Teltumbde and asks them to surrender before April 14. When they surrender, they are arrested and sent to jail by the NIA.

It has been more than two years since the violence against Dalits and other progressive sections and no major accused has been arrested yet. On the other hand, in complete violation of all established legal practices, some activists have been behind bars without trial for nearly two years now.

Pegasus and cyberweapon threats in the age of smartphones
RECENT ARTICLES