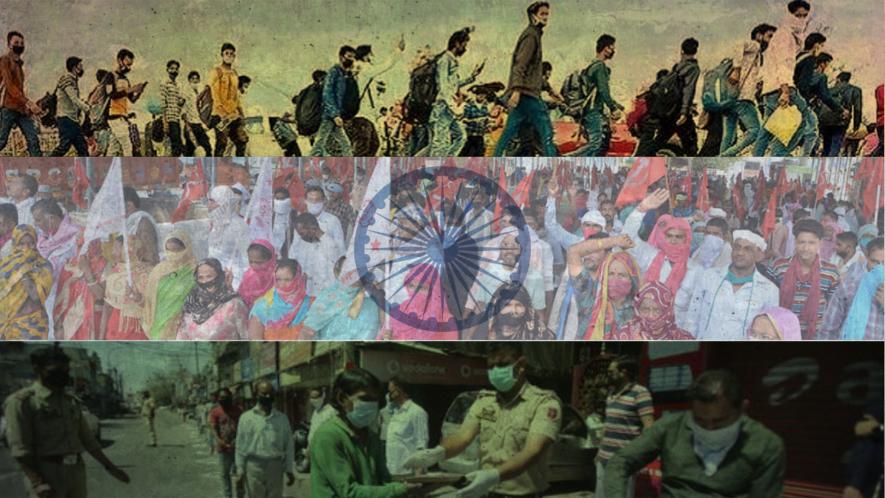 Just a few days before this 73rd anniversary of India gaining Independence, on August 9, hundreds of thousands of workers, employees, agricultural laborers, farmers, and other laboring people protested in all corners of the country, demanding income support, more jobs, end to retrenchment, more foodgrains, better healthcare to deal with the pandemic, and also, an end to policies that favor the rich (both domestic and foreign).

The protest captures the essence of these difficult times that India is passing through – the people are demanding food and jobs while the government is dismantling protective laws for workers, raising the working hours to up to 12 hours per day, inviting foreign companies to take over the country’s natural resources and even defense production, and groping around to figure out how to tackle the COVID-19 pandemic that has so far taken nearly 50,000 lives and infected 250,000 people in the country.

In the past year, the Narendra Modi-led Bharatiya Janata Party (BJP) government has taken the gloves off, so to speak. Perhaps bolstered by its election victory in June 2019, it has openly and aggressively started imposing an agenda that till now was partially hidden. It is the thinking that had remained on the sidelines of India’s mainstream life for decades – the ideology of the Rashtriya Swayamsewak Sangh (RSS) [the paramilitary Hindu fascist organization that is the ideological parent of the BJP].

Committed to this regressive RSS ideology, the Modi government has started dismantling the very foundations of India’s fragile electoral democracy, has undermined the judiciary and other constitutional bodies, encroached upon the rights and responsibilities of state governments, and started building a unitary Center with a strong grip on finances as well as legal rights.

Evidence of this comes from a dozen cases of subversion of elected State governments, the latest example being the failed attempt in Rajasthan. You can see a list here. This is a power-lust that India has rarely seen before – perhaps the Emergency of 1975, imposed by Indira Gandhi being the only example before.

The most telling example is of the erstwhile state of Jammu & Kashmir, which was turned into a huge prison on August 5 last year, and has remained under lockdown since then. With the scrapping of Article 370 and finishing off the special autonomy granted to the State, and its humiliating division into two Union Territories, Central power is now being rammed down the throats of people of the region, who are being kept at bay with force.

But the J&K move is not just about Central power, it’s much more than that. It is part of the ongoing strategy to smuggle in the RSS’ notion of Hindu Rashtra [Hindi nation]. J&K was the only Muslim majority State. Now, with all the political and economic changes being imposed, it could well be in for a drastic demographic changes. This has been the RSS vision for long, and the Modi government is relentlessly pursuing it.

It is, therefore, no coincidence that on August 5, the first anniversary of the scrapping of Article 370, Prime Minister Modi went over to Ayodhya to perform the foundation stone laying ceremony for the Ram Mandir [temple], on the very site where a mosque had stood. He, of course, thanked the Supreme Court for allowing this construction. But the national telecast of Modi, in golden vestments, performing the puja [religious ritual], amidst chanting of religious invocations, and the social media blitz organised by the RSS/BJP followers, was yet another signal of the rising clout of Hindu fundamentalism, which has hijacked the piety of Hindus for political gain.

Earlier, in December last, the Modi government had got a law (Citizenship Amendment Act or CAA) passed to discriminate against Muslim applicants for citizenship while allowing believers of other faiths a fast track process. This, combined with the threat of a citizenship register (National Register of Citizens or NRC) where people will have to prove that they had the mandated documentation for being citizens, made the threat of disenfranchisement for minority communities too real to be ignored.

The result was a massive wave of protests across the country by not just Muslim communities but all secular people. The BJP-led State governments, especially in Uttar Pradesh, brutally cracked down on protesters, including arrests, property confiscation proceedings, police violence, destruction of homes, and use of draconian laws.

These are all signs of an RSS-inspired state that will take recourse to any means to crush protests against its medieval vision. Democracy, federalism, equality before law – some of the key pillars of the Constitution and achievements of the Freedom Struggle – are being ground to dust by the Modi government who, as standard bearers of the RSS, don’t carry the legacy of the Freedom Struggle and the sacrifices of thousands of Indians for gaining Independence.

Besides this attempted destruction of the social fabric of the country, another decisive and far-reaching change that the Modi government has brought in is the empowerment of big business and foreign monopolies – at the cost of Indian people. The pandemic has come in handy for carrying out this agenda, although the process had been going on ever since Modi came to power in 2014.

Protective labor laws have been dismantled, so much so that even the ‘working day’ has been redefined to up to 12 hours instead of eight hours. India has become the only country in the world to breach the eight-hour working day standard. Since wages are largely stagnant and the share of wages in turnover is declining, this only means that exploitation of India’s huge workforce will become more intense.

India is becoming a paradise for big corporates – the Ambanis, Adanis, Tatas and Birlas. That is why the richest 10% Indians own 77% of wealth. And, this is being tom-tommed to the world as India’s ‘unique and lucrative’ quality for ‘ease of doing business’ – lots of cheap labour, with hire and fire freedom to employers.

With this has come the loosening of regulations for exploitative foreign capital to invest in everything — from coal to telecom and even defense production. All this will erode the country’s independence and sovereignty – but Modi and his wordsmiths are describing this as ‘self-reliance’ and are boast about their kind of nationalism!

In the past year, the Modi government has also adopted policies for pushing privatization of education and healthcare, which were already very much in control of profiteers. This will mean that the people will be unable to access basic human needs, such as  education and medical attention, because these will be priced beyond their capacities.

Meanwhile, the condition of the people has deteriorated beyond belief. Joblessness reached over 27% in April during the lockdown, but the sheer desperate need to survive forced people to go out and seek some work, which is being counted as ‘employment’, bringing the joblessness numbers down.

Even then, estimated unemployment continues at about 8%, as it had throughout last year. This is mostly informal, piecemeal ‘employment’ with very low and uncertain wages. In fact, industrial output growth (as reflected in the Index of Industrial Production (IIP)) remains in the red at – 16.6% in June this year after dipping by -57.6% in April and -34% in May.

The Modi government refused to part with its money during the preceding months, throwing the people to the wolves, asking them to face the pandemic and the lockdown with ‘resolve and self-belief’. No income support was offered, except for a paltry Rs.500 (USD 6.6) for three months for Jan Dhan account holders. The insufficient foodgrain doled out through the ration system left out nine crore people. Jobs and wages were lost by millions in the two months of total lockdown, but the government refused to step in to prevent this catastrophic onslaught.

On this Independence Day, one cannot help but ask: is this the vision, the dream that our country’s freedom fighters saw when they sacrificed their lives facing British colonial brutality?

As we remember the dreams of free India, and see this horrendous perversion that has taken its place, the only glimmer of hope for the people is a united struggle for a better, more dignified life. This is what the men and women who participated in the August 9 protest were fighting for, and continue to do so in every nook and corner of the country. This is where hopes for the future are preserved and cherished