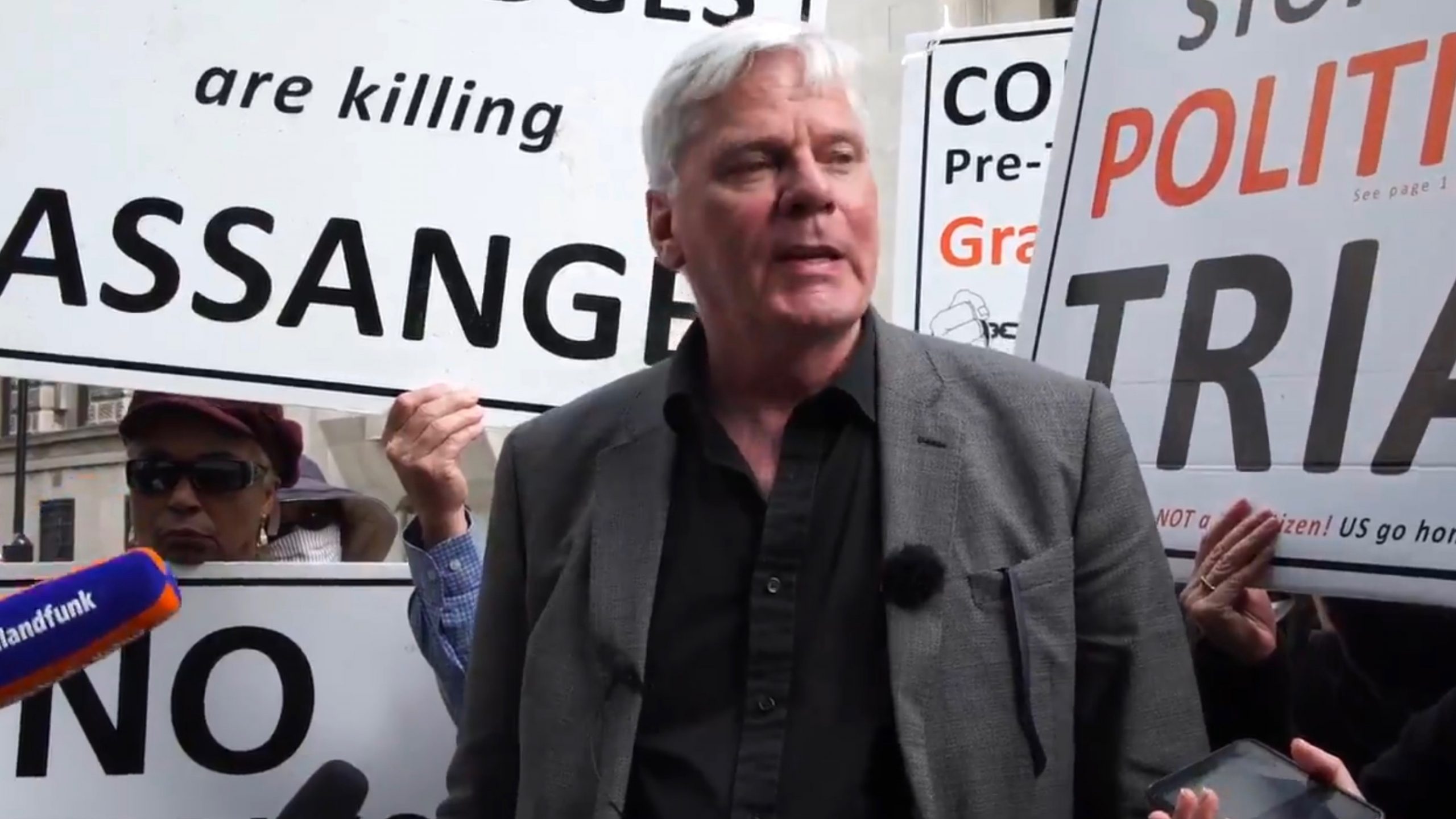 Kristinn Hrafnsson gives a midday report outside the courthouse on Day 2 of Assange's trial. Photo: Screenshot

The trial portion of the extradition hearings of WikiLeaks founder Julian Assange continued for the second day on Tuesday, September 8. The day saw two experts testifying on behalf of the defense – Clive Stafford Smith, a British lawyer, and Mark Feldstein, a media expert. The day also saw the judge issue a warning to Julian Assange when he termed an argument by the prosecution as being “nonsense.”

Clive Stafford Smith is the founder of Reprieve, a human rights organization which has worked with detainees at the infamous US detention facility in Guantanamo Bay. His testimony had to do primarily with the role played by the Guantanamo Bay Files which were provided to WikiLeaks by Chelsea Manning. WikiLeaks released these files in 2011 while media organizations such as The New York Times and the Guardian published them independently. On Tuesday, Clive Stafford Smith explained the importance of these documents, as well as information from Wikileaks’ US Embassy logs which exposed details on drone strikes by the US in Pakistan and was used in litigation in the country.

Stafford Smith specifically mentioned the case of Ahmed Rabbani, a Pakistani taxi driver who remains in the Guantanamo Bay detention facility although no charges have been filed against him. The information in the files released by WikiLeaks was vital in Rabbani’s appeal to the International Criminal Court. The prosecution tried to state that Assange was not being tried for those documents but only for the ones which named intelligence officials. Hence, the testimony of Stafford Smith was not relevant, the prosecution stated. In response, Stafford Smith pointed out that during a potential trial in the US, all these documents could be used against Assange.

However, despite the clarification, the prosecution kept pushing the argument which led Julian Assange to snap at one point, terming it nonsensical. “Apparently my role is to sit here and legitimate what is illegitimate by proxy,” Assange said.

The judge reprimanded Assange and gave him a warning.

“I understand of course you will hear things most likely many things that you do not like and you would like to intervene but it is not your role.

“Your remaining in court is something the court would wish for. But the court could proceed without you.”

The day also saw the continuation of the testimony of Mark Feldstein, a journalism professor at the University of Maryland. The prosecution kept trying to undermine his credibility as a witness by claiming he is biased. Towards the end, when the defense asked if “any act at all that encourages, asks, or assists government official[s] in disclosure of classified information is criminal and prosecutable,” he said not at all.

The day also saw people showing support for Assange in various ways. In an interview with Newclick, iconic musician Roger Waters declared that he too had shown the Collateral Murder video and so was equally guilty. “If Julian is guilty, so am I,” he said. He said Julian is “the contemporary equivalent of the head on a pike as a warning to others.”

Julian Assange is facing 18 charges, 17 of which are under the Espionage Act. If he is extradited and convicted in a trial in the US, he could face up to 175 years in prison. Assange was arrested in April 2019 from the Ecuadorian embassy after the country withdrew its asylum it had granted in 2012. His arrest and continued persecution has been condemned by a host of human rights and media organizations, as well as people across the world.

Courtesy reports from Kevin Gosztola and the Courage Foundation.