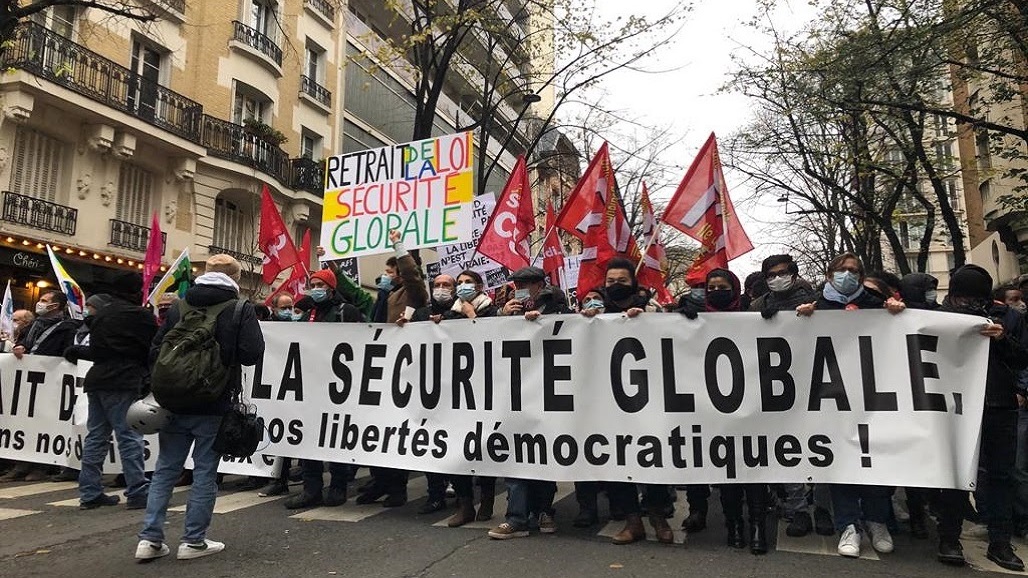 French protesters march against the Global Security Bill on Saturday.

Protests against the controversial Global Security bill – which seeks to give more powers to the police and will lead to less accountability – continue across France. On Saturday, December 5, marches were held in various cities across the country. In Paris, the police attacked the demonstrations and detained several people who were protesting the bill. The bill was approved by the lower house of the French parliament on November 24 and currently awaits Senate approval.

Major protests were also held in the cities of Marseille, Lyon, Strasbourg, Nantes, Annecy, Montceau-les-Mines, Chalon-sur-Saône,  Toulouse, Toulon,  Nice,  and Dijon among others on Saturday.

The demonstrations began on November 17 when the French parliament started discussions on the bill. The proposed law grants more autonomy to the local police, expands the use of surveillance drones and portable cameras by police patrols, and illegalizes the dissemination of images where police officers can be identified. After multiple rounds of protests,  it was reported that the government was willing to re-frame the controversial Article 24 in the new bill which prohibits the filming of police in action.

The French left, including the French Communist Party (PCF) and La France Insoumise (LFI), along with several trade unions, journalists and other progressive sections, have denounced the bill and joined the protests. A March for Liberty were organized on November 28  against the bill and a march was also held at the Human Rights Square at Trocadero in Paris on November 21.

Towards the mobilizations on Saturday, the Syndicat National des Journalistes (SNJ) stated that the protest will not end by just withdrawing Article 24 as there still exist draconian provisions calling for increased police surveillance. SNJ also denounced the police brutality against the protesters on November 28.

On November 26, Loopsider released a video showing police brutality against a Black music director, Michel Zecler, in Paris. The footage from the incident on November 21 showed three policemen beating and tear-gassing Zecler in his office for several minutes. The report triggered outrage against the French police and reinforced opposition to the global security bill. Progressive sections have warned the authorities against eliminating another check against the abuse of power by the police and other state authorities. France has already introduced an array of repressive measures against protests demonstrations following the Yellow Vests protests that rocked the country.