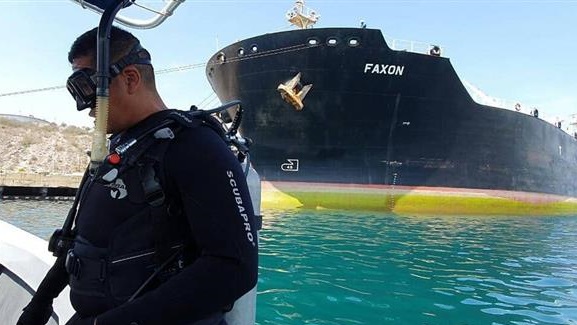 An Iranian ship carrying oil that was docked off the Venezuelan coast in June. File photo

Defying US sanctions, Iran has sent its biggest ever fleet of ships carrying fuel for Venezuela. According to reports, a fleet of 10 Iranian ships is carrying millions of barrels to help Venezuela deal with shortages in the domestic market due to lack of sufficient production caused by the sanctions.

Iranian Press TV reported that these vessels will carry crude from Venezuela in their return journey which will be exported in the international market.

Venezuela, a founding member of the Organization of the Petroleum Exporting Countries (OPEC), is unable to sell its oil in the international market freely due to the unilateral coercive measures of the United States. Its production is also suffering due to lack of maintenance caused by a shortage of spare parts, the imports of which have also been hit by sanctions.

Venezuela’s state-owned PDVSA is trying to rebuild its refineries with the help of Iran, China and Russia, and restart the production.

The Trump administration in the US has imposed sanctions on Venezuela in an attempt to change the regime in the country. The Trump administration refuses to recognize the democratically elected government of Nicolás Maduro. The US and its allies continue to recognize the former president of the National Assembly Juan Guaido’s claim despite his having no grounds to make the claim. The US was quick to also term the recent elections for the National Assembly as fraudulent as well despite several international observers certifying them as well-organized.

The Trump administration has also imposed several rounds of sanctions against Iran since the US unilaterally withdrew from the Iran nuclear deal in May 2018 targeting mainly its oil exports.

In May, Iran had sent five tankers carrying over 1.5 million barrels of oil to Venezuela to help it jump start its refineries despite the US threats to seize the vessels.

Both Iran and Venezuela have officially declined to confirm the news about the latest oil shipments.