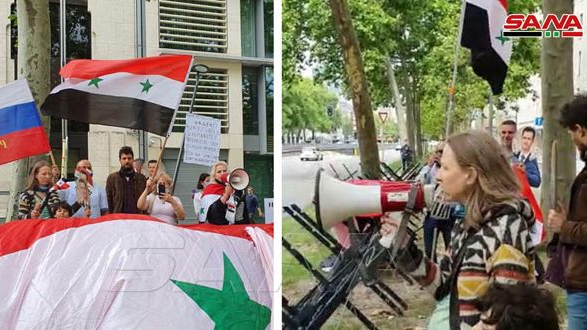 Syrians protesting against US imposed sanctions in Brussels in July, 2020 | Credit : SANA

Unilateral economic and political sanctions imposed by the US on Syria are hampering the rebuilding of the war-ravaged country’s civilian infrastructure and harming Syrian citizens. This was said in a statement by United Nations human rights expert Alena Douhan on Tuesday, December 29. She called on the US to remove the sanctions considering their negative impact on the human rights of the Syrian people.

“The sanctions violate the human rights of the Syrian people, whose country has been destroyed by almost 10 years of ongoing conflict,” said Douhan, UN special rapporteur about the negative impact of the unilateral coercive measures on human rights.

On December 23, the US imposed the largest number of sanctions on Syria in the recent past. This is despite concerns raised by the international community about its negative impact which also prevents Syria’s central bank from receiving international aid along with restrictions on the government’s capability to take effective measures to control the outbreak of the COVID-19 pandemic. The fresh sanctions prompted human rights activists and journalists to compare the move with the devastating decades-long sanctions against Iraq before the 2003 invasion.

Douhan noted that fresh sanctions imposed under the so-called Caesar Syrian Protection Act passed by the US Congress in June 2020 have further “worsened the humanitarian crisis” in the country at the time of the COVID-19 pandemic. The sanctions under the act run roughshod over Syrian people’s “right to housing, health and an adequate standard of living and development.” She said, “the US government must not put obstacles in the way of rebuilding hospitals because lack of medical care threatens the entire population’s very right to life.”

The war in Syria, which began in 2011, has led to the death of nearly 400,000 people and the displacement of millions. The government is trying to consolidate its hold on the remaining regions and rebuild the country. However, the US and some western countries have imposed several unilateral sanctions hampering the process.