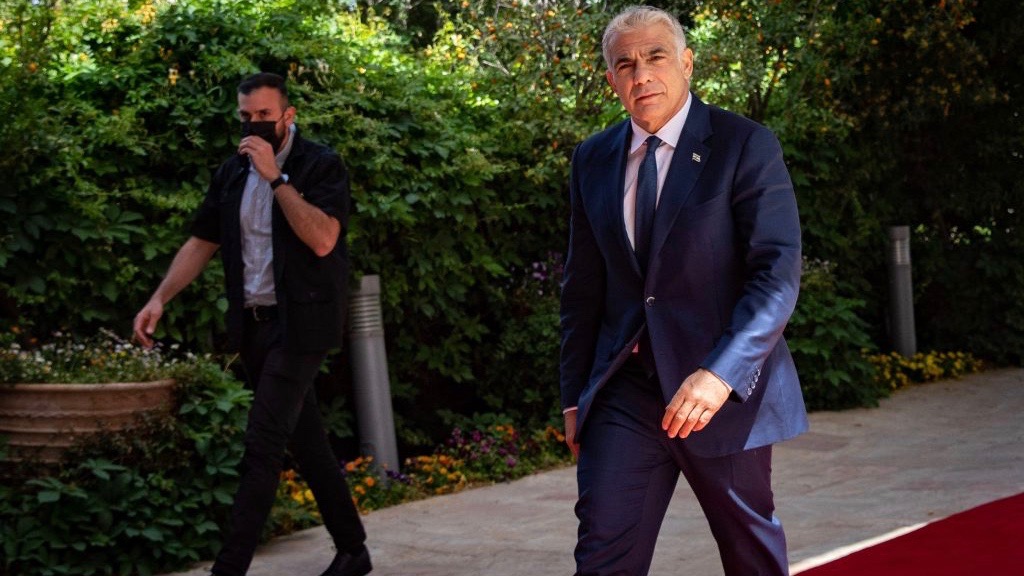 Head of the Yesh Atid party, Yair Lapid, arrives at the president's residence to receive the mandate to form a government on May 5. (Photo: Olivier Fitoussi/FLASH90)

On Wednesday, May 5, leader of the Israeli centrist Yesh Atid party, Yair Lapid, was given the mandate by Israeli president Reuven Rivlin to form a coalition government within the next 28 days. This was after the deadline for incumbent prime minister Benjamin Netanyahu to form a government expired on Tuesday.

Netanyahu’s Likud party won 30 seats in the March 23 election – the fourth general election in Israel in less than two years. The results once again proved inconclusive as no one party or political alliance gained a majority in the 120-member Knesset (Israeli parliament). Following the results, Netanyahu, Israel’s longest serving prime minister with 15 years in office, was given a 28-day deadline to form the government. As he received the pledged support of only 52 Israeli legislators, he was unable to prove the required majority.

President Rivlin, after announcing Lapid’s name in a televised speech, expressed confidence that he will be able to form a coalition government. Lapid already enjoys the support of 56 of the 120 Knesset members and needs just five more to go past the majority mark of 60. After being chosen, Lapid said that he intends to form a government of the left, right and the center “that will reflect the fact that we don’t hate each other.”

Lapid has not only garnered the support of the Labor Party, center-left Meretz, right-wing Yisrael Beiteinu, and the center-right Blue and White, among others, but also received support from five of the six legislators of the Joint Arab List – a first in Israeli politics.

In order to cross the majority threshold of 61 seats, Lapid now requires the support of the seven legislators of the right-wing ultra-nationalist Yamina party, headed by former defense minister and former Netanyahu ally, Naftali Bennett. If successful, this would be the first government in Israeli political history to see Israeli ultra-nationalist, Zionist and right-wing parties enter into a coalition with Labor as well as the Arab parties, which represent the 20% Arab minority population of Israel. Reports say suggest that Bennett and Lapid are trying to reach an arrangement in which both will get an opportunity to serve as the prime minister on rotation basis. Al Jazeera reported that Bennett will most likely serve as prime minister first followed by Lapid for the second half of the term.

Most parties and politicians currently active in Israeli politics want to avoid the fifth general election in little over two years. However, there are serious doubts over whether such a diverse coalition of parties will be able to complete a full term. With most aspects of the brutal Israeli occupation of the Palestinian territories are likely to continue, the coalition is likely to be pulled in different directions on issues such as settlements, where the members of the Joint Arab List have very different views.

If the coalition does manage to form the government, it will be an end to Benjamin Netanyahu’s 12-year-long reign. During this period, Israel has decisively lurched to the right. His policies have buried the peace process and the prospects of a two-state solution and his tenure has seen the rise and growth of a number of far-right organizations and political parties. During Donald Trump’s presidency, Netanyahu oversaw the shifting of the US embassy to Jerusalem, the brutal assault on Great March of Return protesters, a massive expansion of settlements, the passing of the Jewish nation-state law and the annexation of the occupied Syrian Golan Heights. Many of these policies were violations of international law and were heavily criticized.

Netanyahu is also facing multiple corruption charges, including fraud, bribery and breach of trust. Parties which had in the past entered into alliances with Likud are increasingly unwilling to associate with him.