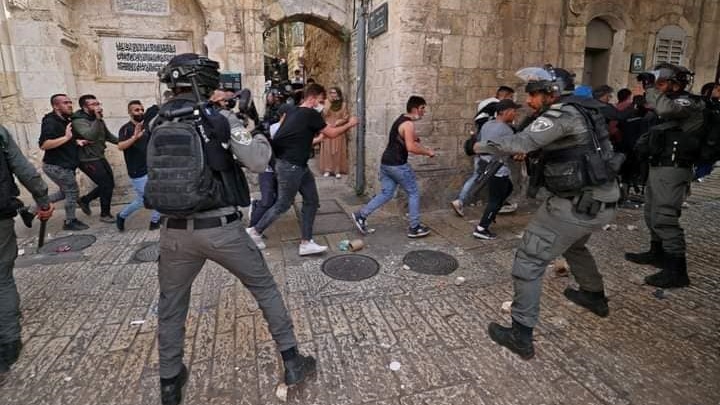 Hundreds of Palestinians were wounded on the morning of Monday, May 10 when Israeli forces attacked the Al-Aqsa mosque compound in occupied East Jerusalem with stun grenades, tear gas sells and rubber-coated bullets for the second time in four days, Palestinian Red Crescent said. At least 307 of the wounded are admitted in different hospitals for treatment. Scores of them have been arrested by the Israeli forces.

The Israeli attack was to clear the compound ahead of a proposed “Flag March” scheduled to start in the evening by the extremist Jewish groups across East Jerusalem as a part of Israel’s celebration of “Jerusalem Day.” Many Palestinians had gathered on the compound following a similar raid on Friday.

Inside the mosque compound now. https://t.co/yNDxp47hr0

Israel celebrates Jerusalem Day to mark its occupation of East Jerusalem in 1967.

Today marks 54 years (Heb calendar) of military occupation of the West Bank and Gaza. Israel will celebrate by trampling over Muslim holy sites, assaulting us & chanting Death to Arabs, with support of Israeli govt. Don’t pretend this is temporary; it’s what Israel is about.

As per tweets and news feed from the ground, thousands of extremist Jewish settlers have gathered in the old city in preparation of their march under heavy security cover.

Times of Israel reported that Israeli defense minister has agreed to change the route of the “flag march” following the violence today and closed Al-Aqsa for Jewish marchers. Some incidents of settler violence against Palestinians have also been reported.

Several videos of security forces and settler violence against Palestinians inside Al-Aqsa compound and nearby areas were circulating on social media throughout the day in which protesters, including women, were being attacked.

Palestinian women hiding from Jewish gangs were chased and attached with gas, stun grenades, and clubs inside Al-Aqsa Mosque.
Several were injured. pic.twitter.com/7aU6bwApN8

In one such video, a settler is seen ramming his car on a Palestinian man standing on the side of the road near the Al-Aqsa compound, wounding him seriously. Later, the driver was escorted out of the crime scene by Israeli security forces.

Several people claimed that Israeli security personnel used sharp shooters to target the Palestinians and did not spare the paramedics helping the wounded or journalists covering their atrocities.

Monday’s incidents mark the continuation of Israel’s attack on Palestinian protesters throughout the last week. On Sunday, at least 17 Palestinians, including one paramedic, were wounded and at least three were arrested when Israeli forces cracked down across East Jerusalem on those protesting the attack on the mosque compound on Friday and eviction of families from Sheikh Jarrah.

The protests across occupied Palestine have been going on for weeks now. It acquired a new dimension following the Israeli forces’ attack on Friday in which at least 200 people were wounded. Following this attack, thousands of Palestinians sat on a vigil inside the mosque and around it.

On Saturday, 90 more Palestinians were injured when Israeli security forces attacked them with stun grenades and tear gas in different parts of the old city.

The Israeli forces have used repressive violence to suppress ongoing protests in East Jerusalem and in most of historic Palestine in solidarity with the residents of Sheikh Jarrah neighborhood in the old city who are facing eviction after a court order on May 2.

According to Times of Israel, at least 23 Palestinian Arabs were arrested and 25 were wounded in different incidents of police violence on protesters across the cities of northern Israel on Sunday.

Following the massive protests, an Israeli court also postponed the hearing of the appeal filed by the affected families in Sheikh Jarrah against their eviction order. The hearing was scheduled for Monday.

Israeli actions throughout the weekend have invited international condemnation with several state leaders and prominent political figures criticizing them and expressing concerns.

The Palestinian Authority issued a statement calling the storming of Al-Aqsa a “crime committed by the occupation”.

On Monday, the UN secretary general expressed his deep concerns over Israel’s use of force on peaceful protesters in East Jerusalem and the possible eviction of families from Sheikh Jarrah and asked Israel to “exercise maximum restraint”.

The UN security council is scheduled to meet on Monday to discuss the issue after two-thirds of its 15 members, including Vietnam and China, requested an urgent meeting.

Iraqi prime minister Mustafa al-Kadhimi said that “Palestinian neighborhoods [indicating Sheikh Jarrah] historically belong to them and should be protected and defended”.

Several other states, including Iran, Syria, Turkey, Pakistan, Switzerland and the US, have condemned or expressed concern over the Israeli attempts to evict Palestinians from Sheikh Jarrah.