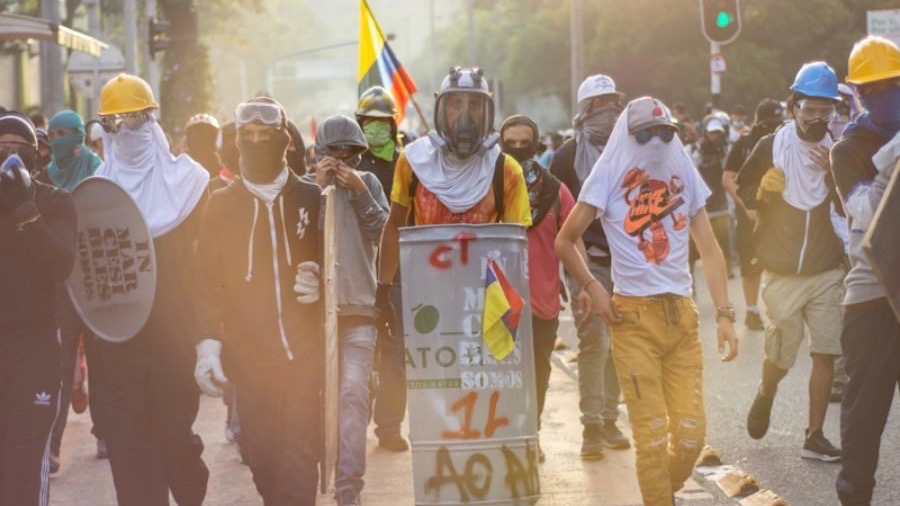 The "first line" in Medellín. The first line inspired by protests in Chile serves as a first line of defense of for protesters from police attacks. Photo: Colombia Informa

The meeting between the representatives of the National Strike Committee and the Colombian government, held on May 17, ended without reaching an agreement. The National Strike Committee, which brings together a diverse group of social organizations and trade unions, issued a statement after the meeting and reported that the far-right national government of President Iván Duque had refused to provide guarantees for social protests in the country, a condition set to begin negotiations to peacefully ceasing the anti-government demonstrations that have been taking place across the country for the past 20 days.

“Today we expected a response to our demands for guarantees for the protest, in order to begin negotiations, and the government said no to everything, and it even ignored various issues,” said the Committee in the statement.

On Sunday May 16, the Committee had submitted a document containing more than 100 demands of different mobilizing sectors, including the respect for the constitutional right to protest of the Colombians, and in the light of the same, the request to immediately withdraw the army from the streets and end the brutal police and military repression, which has killed over 40 protesters. The government officials assured that they would evaluate the document and discuss the demands during Monday’s meeting.

In the statement, the National Strike Committee not only pointed out the government’s lack of will to advance in the negotiations but also denounced its response in the form of intensification of militarization and repressive actions.

“The real response we have received today has been the brutal police violence unleashed since last night in Yumbo, with at least two murders, 24 injured and 18 disappeared people,” said the Committee. It also condemned the fact that “while we were in the meeting, President Duque announced the deployment of the maximum capacity of the public force to unblock the country.” and that their “response to the guarantees is that of scorched earth against the national strike.”

The Committee stressed that, despite disagreement and repression, it is still willing to engage in dialogue as long as the requested guarantees are respected. The Committee announced that “the strike continues” and ratified its call for “the largest and most peaceful mobilizations for this Wednesday, May 19, for life and peace,” given before the meeting.

Francisco Maltés, the president of the Central Union of Workers (CUT), in conversation with El Espectador, stated that “we cannot initiate a negotiation table due to the violence that is being experienced because there is a violation of international humanitarian law. This massacre that exists has to stop.” Maltés also pointed out that “if Duque had addressed the list of requests a year ago, this would not be happening.”

In the past 20 days of national strike and nationwide mobilizations throughout Colombia, the national security forces have unleashed an unprecedented level of repression against peaceful protesters.

On Monday morning, the officials of the Anti-Disturbance Mobile Squadron (ESMAD) repressed a peaceful protest in the Yumbo city in the Valle del Cauca department with tear gas, while a helicopter shot indiscriminately against the protesters. In the incident two protesters were killed, 24 were injured, most of them are in critical condition, while 18 have gone missing after they were arrested by ESMAD.

On Sunday night as well, the ESMAD officials had attacked the citizens with firearms in the city. During the shooting, according to reports, a bullet hit a gas cylinder and caused an explosion near the headquarters of the state oil company, Ecopetrol, killing at one and injuring over 10 protesters.

Senator Wilson Arias of the progressive Democratic Pole party, through his twitter account, condemned the incident as an act aimed at inciting war. “I am told that in a huge and macabre provocation, they have blown up an Ecopetrol tank in Yumbo. Like the Reichstag fire in Germany, which preceded the Holocaust, dark forces want to ignite war and massive massacre against the people in Colombia,” tweeted Arias, calling on the people to joining the mobilization on May 19 in millions.

According to the human rights organization Temblores, between April 28 and May 17, 43 people were killed by police, 18 people were victims of sexual assault by the police, 33 suffered eye injuries, 1139 were arbitrarily arrested, and 146 were injured with firearms by police. In total, 2,387 cases of police violence were registered. Other estimates have shown that the number of people killed in the context of the protests is at least 50 and that several have been killed by unidentified actors.

In this regard, on May 14, several national human rights organizations and progressive senator, Ivan Cepeda, submitted a complaint to the International Criminal Court (ICC) about the crimes against humanity and human rights violations committed by the Colombian government during the ongoing national strike in the country, and requested the ICC for its intervention.

On May 15, the Inter-American Commission on Human Rights (IACHR), requested permission from the Colombian government to verify the human rights situation, after receiving thousands of petitions from Colombian civil society representatives, students, academics and politicians to investigate the human rights violations by the security forces.

Since April 28, hundreds of thousands of Colombians have been mobilizing across the country as a part of the national strike against President Duque and his neoliberal policies. The national strike was called for by the trade unions, social organizations and left-wing political parties against the Sustainable Solidarity Bill, a tax reform bill presented by the national government that sought to finance the fiscal deficit incurred due to the COVID-19 pandemic from the pockets of the working class. After five days of massive protests, Duque announced the withdrawal of the bill. However, Colombians have remained on the streets demanding that the government address the broader issues facing the country.