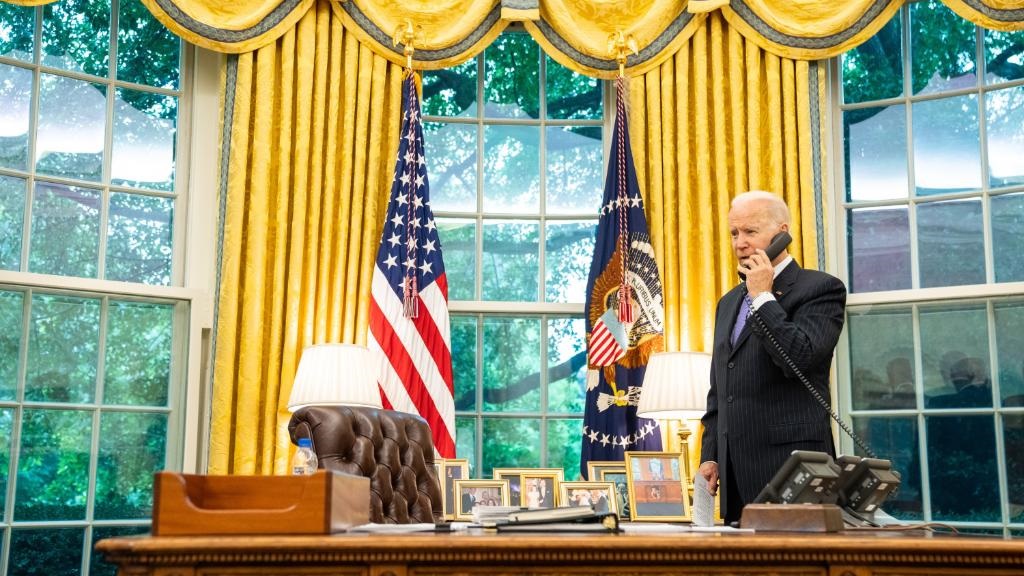 Continuing with its aggressive policies in West Asia, the US military carried out airstrikes early in the morning of Monday, June 28 in at least three different locations in Syria and Iraq. The attack, the second since president Joe Biden assumed office, led to global condemnation.

According to the Syrian Arab News Agency (SANA), one child was killed and three other persons were wounded in the attacks on a civilian location in al-Bukamal town near the Iraq border in Dayr al-Zawr (Deir Ezzor) province. According to SANA, the airstrikes were carried out around 1 am in the morning.

The Pentagon claimed in a press statement that the strikes were sanctioned by the president Joe Biden in “retaliation” to “unmanned aerial vehicle (UAV) attacks on US personnel and facilities inside Iraq” by Kata’ib Hezbollah and Kata’ib Sayyid al-Shuhada, which it called “Iran-backed militias.” The statement further said that the attacks were targeted at operational and weapons storage facilities at two locations in Syria and one location in Iraq.

The location and damage caused by the US airstrike inside Iraq were unknown. Reuters reported on Monday that an Iraqi military spokesperson had condemned the airstrikes

Kata’ib Hezbollah and Kata’ib Sayyid al-Shuhada are constituents of the Popular Mobilization Forces (PMF) or Hashd al-Sha’abi, an official part of the Iraqi army. These groups have opposed the deployment of foreign forces in the country, particularly after the assassination of general Qassem Soleimani and Abu Mahdi al-Muhandis by the US in January last year.

The US and other international forces were deployed in the country under an agreement to fight against the ISIS or Daesh terrorist group. Following the assassination of Soleimani, Iraq’s parliament passed a resolution asking the government to take necessary steps to expel foreign troops from the country, making their presence in the country illegal. However, the US has claimed that its presence in Iraq is legal. Sunday’s statement claims that, “we are in Iraq at the invitation of the government of Iraq for the sole purpose of assisting the Iraqi Security Forces in their efforts to defeat ISIS.”

Following the assassination of Soleimani, the parliamentary resolution and increasing popular resistance against its presence, the US withdrew part of its 5,000-strong force from the country and relocated the remaining 2,500 personnel in a few camps near the capital Baghdad or in its high security Green Zone area. However, this has not been able to prevent the attacks on them leading to some casualties.

The presence of US troops inside Syria is also illegal as the US never sought the permission to do so from the Syrian government fighting wars against rebels and ISIS.

Sunday’s attacks have been criticized by the progressive and anti-war activists all over the world. Reacting to the claims of “self defense” as the reason for the airstrikes, Caitlin Johnstone argued that actual self defense for the US would be to withdraw its forces from the region.

"The only actual defensive action that the US could legitimately take to protect troops in Iraq and Syria would be to remove US troops from Iraq and Syria."https://t.co/biUcrtoJem

Quoting the statement which argued that the attack was against “Iran-backed” militias, CODEPINK reminded the Joe Biden administration of its promise to work for peace in the region and said that Sunday’s attacks were provocative.

Is Biden trying to start a war with Iran? First he seizes Iranian websites, now he just bombed Iranian-backed militias in Iraq and Syria. Isn’t he supposed to be negotiating a US re-entry into the nuclear deal? THIS IS NOT HELPFUL!!!https://t.co/CoJzjabt70