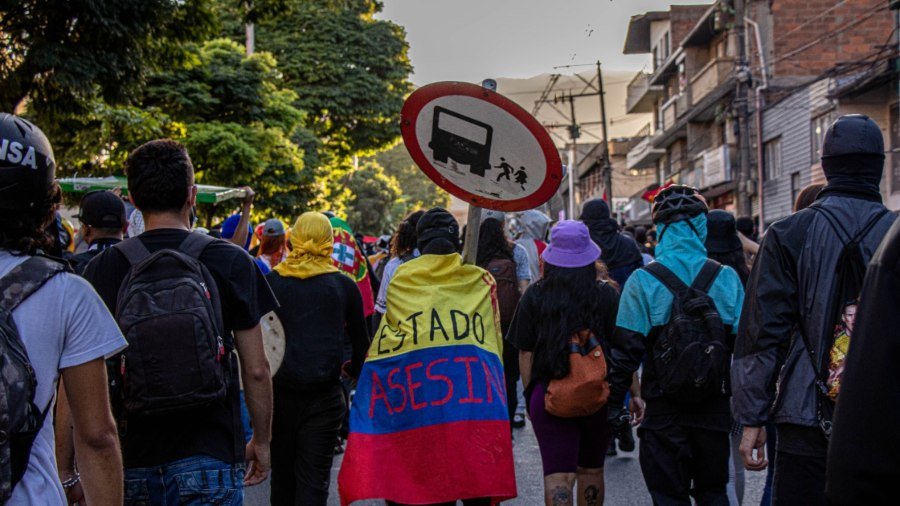 On June 28, hundreds of thousands took to the streets across Colombia to mark two months since the beginning of the national strike in the country. The national strike, which began in rejection of a tax reform bill, has transformed into a national struggle against the far-right government of President Ivan Duque and his neoliberal and oppressive policies.

Since April 28, workers, teachers, students, doctors, peasants, Indigenous and Afro-descendant communities, women and LGBTQ movements, human rights organizations, progressive political leaders, have been mobilizing in urban and rural regions of the country to demand that the government take measures to face the urgent issues facing the country. These include the worsening socio-economic conditions, rampant inflation and high levels of unemployment and poverty, which have been exacerbated by the government’s austerity measures in the midst of the COVID-19 pandemic. They are also demanding that the government address the long-standing demands of each of these sectors, for which they have been mobilizing since August 2018, when Duque assumed presidency.

Additionally, in the face of the state’s brutal response to the social protests, wherein at least 80 protesters have been killed, mobilizing sectors are also demanding an immediate end to unjust police and military repression, the withdrawal of the army from the cities, dismantling of the Anti-Disturbance Mobile Squadron (ESMAD) and the resignation of defense minister Diego Molano.

The National Strike Committee (CNP), which brings together diverse groups of mobilizing social organizations and trade unions, urged the national government several times to respect their constitutional right to protest and sign an agreement to guarantee the right without being assaulted by the police and specifically the ESMAD. However, the government authorities ignored the request and as a result, the CNP suspended the negotiations with the government in early June.

The committee announced a new plan and reported that the various sectors will now present their demands as bills in the Congress on July 20, Independence Day in Colombia, and that day, they will also hold a new massive march under the banner of “For Life, Peace, Democracy and Against the Neoliberal Policies of Duque’s Government.”

Police reforms and justice for the victims of human rights violations committed by the national security forces in the past two months are on top of the list.

According to the human rights organization Temblores, between April 28 and June 26, a total of 4,687 cases of police violence were registered in the country. These included 44 deaths, 1617 victims of physical violence, 82 victims with eye injuries, 228 cases of shooting with firearms, 28 victims of sexual violence, 9 victims of gender-based violence, 2,005 arbitrary arrests, 784 violent interventions, 35 cases of use of venom grenades and 48 cases od respiratory issues due to tear gas. Estimates by other human rights organizations such as Defender la Libertad put the number of killed at 80.

On June 28 as well, the ESMAD repressed the peaceful protests in the capital Bogota and in the city of Medellín. The alternative media outlet, Colombian Informa, reported the ESMAD officials attacked their correspondents, who were covering repression in Medellín, with tear gas and stones.

Several national and international human rights organizations have expressed their concerns regarding the excessive, disproportionate and arbitrary use of force and implementation of military assistance programs to suppress social protests. In the beginning of the month, a human rights mission of the Inter-American Commission on Human Rights (IACHR) visited Colombia to analyze the human rights violations committed by the security forces. The mission is expected to present its findings in the coming weeks.