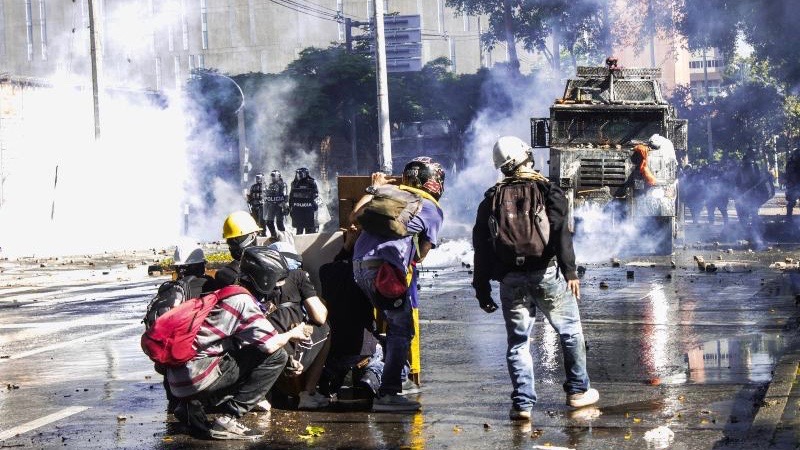 At least 84 people have been killed by the national security forces in the past 70 days of national strike in Colombia. Photo: Colombia Informa

July 7 marks ten weeks since the beginning of the national strike in Colombia. The national strike, which began in rejection of a neoliberal tax reform bill, has transformed into a national struggle against the far-right government of President Ivan Duque and his austerity and repressive policies. Since April 28, hundreds of thousands of Colombians have been mobilizing in all corners of the country demanding structural changes and an end to policies that deepen economic crisis and social inequality.

While diverse sectors have mobilized consistently since Duque assumed the presidency in August 2018, the ongoing national strike has been the longest wave of mobilization that has also achieved the highest level of unity in Colombia.

In response, the national government has unleashed unprecedented levels of police and military repression against peaceful protesters. In the past 70 days of national strike and nationwide mobilizations, at least 84 people have been killed by the national security forces, according to the Defender la Libertad human rights organization.

According to the human rights organization Temblores, between April 28 and June 26, a total of 4,687 cases of police violence were registered in the country. These included 44 deaths, 1617 victims of physical violence, 82 victims with eye injuries, 228 cases of shooting with firearms, 28 victims of sexual violence, 9 victims of gender-based violence, 2,005 arbitrary arrests, 784 violent interventions, 35 cases of use of venom grenades and 48 cases od respiratory issues due to tear gas. The organization is verifying the details of 29 other homicides.

Meanwhile, the Press Freedom Foundation (FLIP) reported that it documented 260 attacks against journalists with a total of 299 victims in the two months of national strike. The NGO further reported that 58% of these attacks were committed by the members of public forces.

Last week, on July 1, the Special Jurisdiction for Peace (JEP) warned that Colombia is the second country in the world after Myanmar that has the highest rate of violent deaths per day of protest, one death in every 36 hours. In a statement, the JEP said that “the national strike and the treatment given to social protest has generated risks that affect compliance with the constitutional and legal mandate of the JEP and the other components of the Comprehensive System for Peace.”

The JEP reported that during the national strike, the events of armed conflict and the effects on civilians have increased in 111 municipalities, as compared to the figures registered in the same period between 2017 and 2020. “In 2021, there is a total record of 13 conflict events and 89 civilian repercussions, in the latter there is an increase of more than 400% since on average there were 18 civilian repercussions in previous years. This is evident in the increase in death threats and homicides that have occurred against former combatants of the Revolutionary Armed Forces of Colombia – People’s Army (FARC-EP), and the massive forced displacements,” highlighted the JEP.

Paramilitary violence and the humanitarian crisis that it generates has also escalated in Colombia. The massacres, the systematic assassination of environmentalists, land defenders, human rights activists and leaders of Afro-descendent and Indigenous communities, the selective killings of former combatants of the former FARC guerilla group continue at an increasingly worrisome rate in the country.

In its most recent quarterly report, the UN Verification Mission in Colombia (UNMC) also verified that between March 27 and June 25, 16 former FARC combatants and 49 human rights leaders and defenders were killed. It also reported that the Office of the United Nations High Commissioner for Human Rights (OHCHR) documented 9 massacres during this period, and 10 more are being verified.

The report highlighted that despite the progress made in the implementation of the peace agreements, there are still major shortcomings, especially in economic guarantees for the people who abandoned the armed struggle.

With regard to the national strike, the report noted that 54 civilians died as a result of the repression by the Anti-Disturbance Mobile Squadron (ESMAD). The UN Secretary-General António Guterres, while presenting the report, said that non-violence, dialogue and agreement are the way that will allow Colombia to advance towards “reconciliation and restoration of its war-torn social fabric.”

The situation of violence, which was believed to improve after the signing of peace agreements between the former national government and the FARC in November 2016 in Havana, Cuba, has only worsened after their disarmament. There has been a significant expansion of paramilitary and drug trafficking groups in the areas where the FARC had control previously. The conflicts between armed groups to define control over land for drug trafficking and illegal gold mining activities is forcing the people to move away from their homes.

At the end of last month, on June 24, the United Nations Office for the Coordination of Humanitarian Affairs (OCHA) reported that between January and May 2021, over 29,250 Colombians were forced to abandon their homes in 63 mass displacement events due to the violence. According to the report, 81% of these citizens remain displaced due to the impossibility of returning to their territories plagued by insecurity.

The OCHA reported that the number of victims of mass displacement has increased by 101% between January and May 2021 as compared to the same period in 2020. Likewise, the number of displacement events has increased by 31% in relation to the same period in 2020. The report further reported that the situation of the Pacific and Northwest regions is very critical.

The members of various armed groups operating in the country specifically target environmentalists, land defenders, human rights activists and leaders of Afro-descendant and Indigenous communities, who work to defend land and natural resources, and protest against the cultivation of illicit crops and illegal mining activities in their territories.

According to the Institute of Development and Peace Studies (INDEPAZ), since the signing of peace agreements up until today, 1,202 environmentalists, human rights defenders, community, peasant and social leaders, and 277 former combatants of the FARC, who are in the reincorporation process, have been assassinated by illegal armed and drug trafficking groups.

As of July 7, 86 social leaders and 28 ex-combatants of the FARC had been murdered just in 2021. Additionally, around 180 people have been killed in 48 massacres perpetrated in the first six months of this year.

Despite the numerous repeated calls to the national government to implement measures to stop these acts of violence and dismantle the illegal armed groups, Duque’s administration has yet to take any serious action and continues to attack social protest. He even rejected the findings presented by the Inter-American Commission on Human Rights (IACHR) from their visit to Colombia.

In a press conference held today July 7, the IACHR released their report of Observations and Recommendations based on their visit to Colombia from June 8-10, 2021. The visit had initially been blocked by the government of Iván Duque and the report released contained sharp denunciations of the government’s “disproportionate” response to the social protests.

Among the 40 recommendations, the IACHR called for the separation of the National Police and the ESMAD from the Ministry of Defense in order to “consolidate and preserve security with a civic and human rights focus and to avoid all possible military perspectives.” They also highlighted that the Colombian state has the responsibility to tolerate protests even if they cause minor disturbances to daily life and use force as a last resource. Duque rejected the report and said “no one can tell us to be tolerant of criminality.”