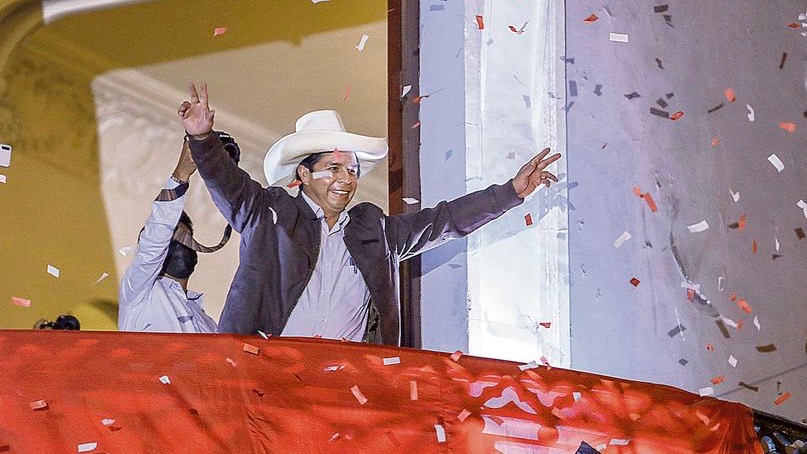 The National Jury of Elections (JNE) proclaimed Pedro Castillo as the next president of Peru on July 19. Photo: Aldair Mejía / La República

Almost a month and a half after the second round of presidential elections in Peru, the National Jury of Elections (JNE), on July 19, proclaimed Pedro Castillo of the left-wing Free Peru party as the winner of the run-off and the next president of the Republic. The JNE also proclaimed Dina Boluarte as the first vice president of the country.

After resolving and declaring unfounded the last appeals for annulment of votes presented by Castillo’s opponent, Keiko Fujimori of the far-right Popular Force party, alleging irregularities and fraud in the electoral process, the JNE announced that Castillo secured 50.126% of the votes, while Fujimori obtained 49.874% of the votes. Castillo won the elections with a narrow margin, receiving 44,263 more votes than his rival. The new head of state and his vice-presidents will be sworn in on July 28, the bicentennial of Peru’s independence from Spain.

Minutes after the official announcement, thousands of supporters of Castillo, gathered outside the party’s headquarters in Lima to celebrate his historic victory. Castillo addressed the citizens and thanked them for their support. He also thanked the electoral authorities for their work and called on the opposition forces to unite for a better Peru.

“I call for unity to forge and open the door to the next bicentennial to come, sealing our differences. I do not hold a grudge in my heart. I call on Mrs. Fujimori to put no more barriers to the advancement of this country,” he said.

“Thank you Peruvian people for this historic triumph! The time has come to call on all sectors of society to build together, in this bicentennial year, an inclusive, just and free Peru. Without discrimination and for rights and all. We call on the Afro, Coastal, Andean and Amazonian peoples, the working class and their unions, the Indigenous and peasant communities and the whole society to make this homeland beautiful. Today, sisters and brothers, a new stage in our history begins,” he tweeted later.

Hours before the proclamation, in a press conference, Fujimori announced that she would recognize the results issued by the JNE. “I announce that, fulfilling my commitments assumed with all Peruvians and the international community, I will recognize the results because it is what the law and the Constitution that I have sworn to defend say,” she said.

However, she insisted that there had been electoral fraud despite the fact that she had no evidence to support her claims and the electoral authorities and the international observer missions found the elections clean. “The defense of democracy does not end with the illegitimate promulgation of Pedro Castillo. This defense is just beginning,” she said.

Meanwhile, the outgoing president Francisco Sagasti greeted the president-elect Castillo on his proclamation. “I welcome the proclamation of Pedro Castillo as president-elect following the announcement of the results by the JNE. Let us look with optimism at the future of our country. Nine days before the Bicentennial, may this be the beginning of a new phase of reconciliation, consensus and unity,” he tweeted.

Verónika Mendoza, one of the progressive candidates who also contested in the first round and announced her support for Castillo in the second round, also congratulated him. “Congratulations, once again, to the president-elect Pedro Castillo. May your government be the government of the people, of change, unity and peace. After a thousand coup maneuvers, in the end the truth and the popular will prevailed, as it should be in a democracy. Long live Peru!,” Mendoza wrote in a tweet.

Likewise, various social and political leaders, intellectuals and activists from across the region recognized Casittlo’s victory and congratulated him.

Argentine President Alberto Fernández reiterated his congratulations to Castillo and vowed to “work together for a united Latin America.”

Argentine Vice President Cristiana Fernández also felicitated Castillo. “We wish you every success in your administration and send a big hug to the dear Peruvian people,” she tweeted.

Bolivian Vice President David Choquehuanca also sent his best wishes and stressed that “we are people of two sister nations and we have the great mission of working together for our Great Homeland.”

Former Bolivian President Evo Morales also celebrated Castillo’s victory. “It is the triumph of the dignity and unity of the humble people over neoliberalism. Pedro will teach how to govern for the most marginalized and sacrificed people,” said Morales.

Venezuelan President Nicolas Maduro also congratulated the Peruvian people and Castillo and said that “a new political cycle is being opened that we wish to be successful for this South American nation. The people of Venezuela embrace you brothers and sisters.”

Who is Pedro Castillo?

51-year-old Castillo is a primary school teacher, a union leader and a member of the urban and rural peasant patrols movement. He has proposed the nationalization of natural resources and strategic industries such as mining, oil, hydropower, gas and communications to equitably divide the country’s wealth. He proposes that the state should ensure basic rights to the citizens in order to address the crisis facing Peru, rooted in decades-long inequality.

He has also expressed himself in the favor of rewriting the country’s constitution, which was drafted during Alberto Fujimori’s dictatorship (1999-2000), with the aim of giving the state more control and a leading role in the economy to compete with the private companies. According to various progressive economists, the current constitution enshrines the neoliberal order and deepens inequality in the country.

Many progressive leaders of the Latin American and Caribbean region believe that Castillo’s victory will strengthen regional integration and the anti-imperialist movement growing in the region.