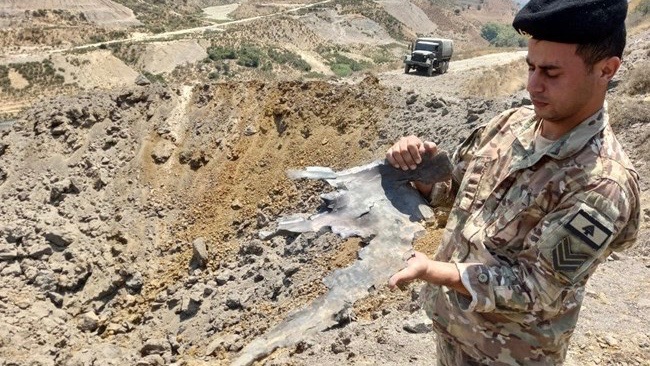 Aftermath of Israeli airstrike near Mahmudia in southern Lebanon on August 5, 2021. (Photo: The Daily Star/Mohammed Zaatari)

Israeli jets carried out airstrikes on three different locations in south Lebanon on Thursday, August 5. There is no report of any casualties yet. This is the first time in the last seven years that Israel has officially confirmed its airstrikes inside Lebanon.

According to the official Lebanese National News Agency, Israeli aircraft carried out three airstrikes outside the southern border towns of Tyre, Marjaiyoun and Mahmudia early morning on Thursday.

The Israeli army claimed that the strikes were carried out in response to rockets fired from Lebanon into Israeli territories for two consecutive days.

According to the Lebanese army, on Wednesday, Israel carried out 92 artillery shellings inside southern Lebanon areas of Wadi Hamoul and Al-Sadana, among others. Israel claimed that the shelling was in response to three rockets fired from Lebanon, of which two landed near the northern Israeli town of Kiryat Shmona, injuring at least four people.

The Lebanese army has said it is investigating the rocket firing in collaboration with the United Nations Interim Force in South Lebanon (UNIFIL). Israel’s defense minister Benny Gantz claimed that some Palestinian groups were responsible for the rocket fire.

Responding to the news of the Israeli air strike, Lebanese president Michel Aoun said in a tweet that it “indicates the presence of escalating aggressive intentions that coincide with the continuous threats against Lebanon and its sovereignty.” He called the airstrikes a flagrant violation of the UN security council resolution 1701.

Lebanon does not recognize Israel and calls the territory under Israeli control as occupied Palestinian territories. Therefore, it does not have a formal border with Israel. UNSC resolution 1701 was adopted to end the 2006 Israeli aggression inside south Lebanon. The resolution demands respect for the Blue line between both countries as an international border. It also mandated the deployment of UNIFIL II to monitor the violations of the Blue line.

UNIFIL head of mission Major General Stefano Del Col called for an immediate ceasefire and maximum restraint from both the parties to avoid further escalation.

Though Thursday’s strikes were the first acknowledged Israeli airstrike inside Lebanon since 2014, Israel has often violated Lebanese air space to carry out unclaimed strikes inside Syria. It has also been accused of using drones to strike at the Hezbollah office in Beirut in August 2019. Last month, it had fired several artillery shots inside south Lebanon claiming similar rocket attacks.