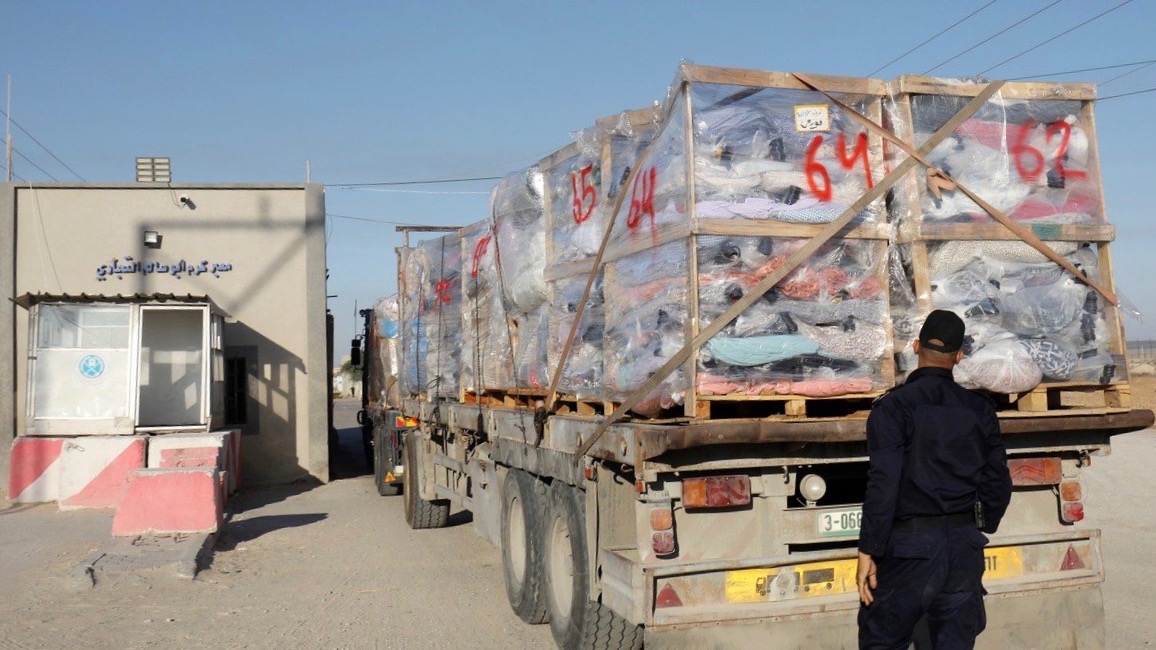 Trucks loaded with cargo for export at the Kerem Shalom crossing in Gaza on June 21. (Photo: Abed Deeb/ApaImages)

Israel allowed the supply of significant quantities of construction materials into the besieged Gaza strip after a long gap, multiple news reports stated on Wednesday, September 1. The Israeli body responsible for civilian affairs in the occupied Palestinian territories, COGAT, announced yesterday that the fishing zone limit for Palestinian fishermen of Gaza will be extended to 15 nautical miles (28 kms).

This is a small increase as Israel earlier allowed Palestinians in Gaza to fish only up to 12 (22kms), six, and at times only three nautical miles. Fishing zones in Gaza have been restricted during the Israeli blockade, imposed in 2006, and even before. Israel continues to be in violation of the limit of 20 nautical miles (37 kms) that was agreed upon between the Palestine Liberation Organization (PLO) and Israel in the Oslo Accords of 1993.

For over two weeks, Palestinians in Gaza have been staging protests demanding an end of the 14-year-long Israeli blockade and relaxation of the wide-ranging restrictions imposed on the movement of people, supply of goods, fishing and other trades in the territory. The Israeli and Egyptian blockade on Gaza began after Hamas’ takeover of the strip from Fatah following the latter’s unwillingness to hand over power after Hamas won from Gaza in the Palestinian elections of 2006.

The COGAT also announced that water supply to Gaza will be increased by a further five million cubic meters. An additional 5,000 Palestinian businessmen and traders will be granted entry permits into Israel, up from the current 2,000. In a statement, the COGAT said it would allow entry for more goods and equipment into Gaza in the coming weeks to be used for international construction projects in the tiny Palestinian territory.

Human rights groups and the international community have long been calling for Israel to allow the supply of goods which are urgently required for rebuilding and reconstruction of thousands of damaged homes, residential buildings, hospitals, schools and other civilian infrastructure in Gaza. The Israeli bombing campaign in May this year, which killed more than 260 Palestinians including 67 children and 39 women, resulted in the complete destruction of around 20,000 housing units in the Gaza strip. Another 22,000 suffered partial damage, according to Gaza’s housing ministry.

Bassam Ghabin, director of the Palestinian side of the Kerem Shalom cargo crossing, told news outlets that 30 truckloads of cement, 120 trucks of gravel and 15 trucks of steel entered Gaza on Tuesday. The building materials had started entering on Monday. He also said that “the Israeli occupation authorities allowed the entry of building steel rods for merchants for the first time in more than 100 days.” He added that the crossing was operating at the same capacity as in May before the Israeli airstrikes.

While these steps have been welcomed by rights groups and others, there is a need for more expansive opening of restrictions and an eventual full lifting of the blockade to improve the lives of Palestinians living in Gaza and for the extensive reconstruction required in the territory. Israeli rights group Gisha in a statement said that Tuesday’s development was “crucial but insufficient, especially given the scope of the damage in Gaza, as well as Israel’s legal and moral obligations towards residents of the strip.” The group added that “the situation in Gaza is not simply a humanitarian crisis that can be managed via narrow humanitarian gestures. Any meaningful attempt at resolving this dire situation requires a much more expansive opening of the strip, underpinned by a broader political process.”

The United Nations (UN) has also repeatedly called upon Israel to end the blockade. The latest call made to the UN security council by the UN’s envoy for Middle East Peace, Tor Wennesland, said that “although movement and access in and out of Gaza should be further improved, no amount of humanitarian or economic support on its own will address the challenges facing Gaza. The current gradual approach is a holding operation and not a strategic way forward and a solution for the people in Gaza.” He concluded that ultimately what is needed is “the establishment of an independent, sovereign Palestinian State, of which Gaza is an integral part.”

The UN had warned a few years back that Gaza will be made ‘unlivable’ by 2020 if urgent steps are not taken by Israel and the international community to end the blockade and assist the government and people in Gaza to carry out rapid and uninterrupted reconstruction and restoration work.