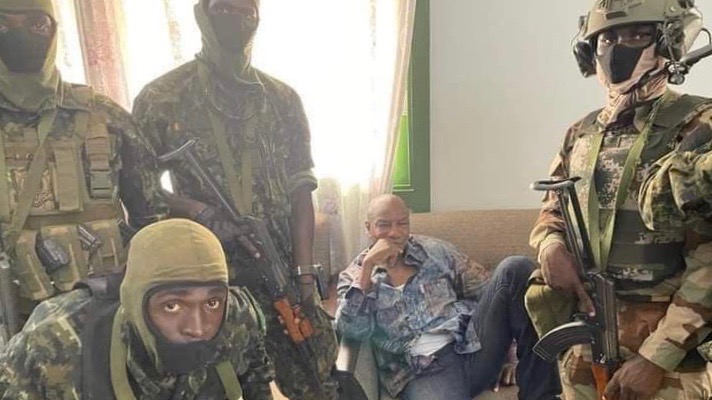 In a coup in Guinea, armed forces captured president Alpha Conde and announced the dissolution of the government on Sunday, September 5. At least two people were wounded in heavy gunfire in and around the presidential palace at the capital Conakry during the arrest of the president.

The coup leader, colonel Mamadi Doumbouya, in a television broadcast, declared that the armed forces had taken over control of the country and dissolved the government led by president Conde. He also announced the dissolution of the constitution and said that military leaders would run the country.

The group of soldiers who carried out the coup called themselves the National Committee for Reconciliation and Development (CNRD). They released a video assuring that Conde is safe in their custody. They also announced a national curfew and invited “outgoing ministers and former presidents of institutions for a meeting” on Monday, Africanews reported.

According to local reports, despite a claim by the ministry of defense that the coup attempt was defeated, armed forces have been patrolling the city of Conakry and have sealed off its Kaloum area where most of the official buildings, including the presidential palace, are situated.

Conde, 83, won his third presidential term in the elections held in October 2020 and was declared president on November 7. The opposition had alleged fraud during the elections. Conde’s decision to amend the constitution, which had a two-term presidential limit, to contest again for the third time in March 2020 had resulted in massive opposition-led demonstrations across the country. The protests were suppressed using force, in which dozens of protesters died and hundreds were arrested.

Following the breaking of the news of the coup, people were seen celebrating on the streets in some parts of the capital, Al Jazeera reported.

However, several regional and global leaders issued condemnations of the coup attempt and asked the military to release the president. The Economic Community of West African States (ECOWAS) threatened to impose sanctions. United Nations secretary general Antonio Guterres asked the coup leaders to release Conde immediately, saying “I am personally following the situation in Guinea”.

I am personally following the situation in Guinea very closely. I strongly condemn any takeover of the government by force of the gun and call for the immediate release of President Alpha Conde.

Several activists and rights groups in Africa also condemned the coup, with some claiming that it is backed by foreign powers such as the ex-colonial power France and the US. There are claims that coup leader Doumbouya and others had links to and in some cases were trained by the US’ AFRICOM

Fascinating to see a picture of @USAfricaCommand soldiers with the Guinea (Conakry) coup leader Col. Mamadi Doumbouya. Commando that did the coup were heavily trained by French and Americans via #AFRICOM mainly in Burkina Faso. #Guinee #Guineeconakry #Guinea #conakry pic.twitter.com/9gI4AJXFvG

Guinea was a French colony until 1958, when it got formal independence. It has large deposits of various mineral resources including gold, diamond, bauxite and iron ore. Conde first got elected in 2010 after two years of military rule and was able to maintain power since then, despite the opposition alleging various human rights violations and corruption during his rule.