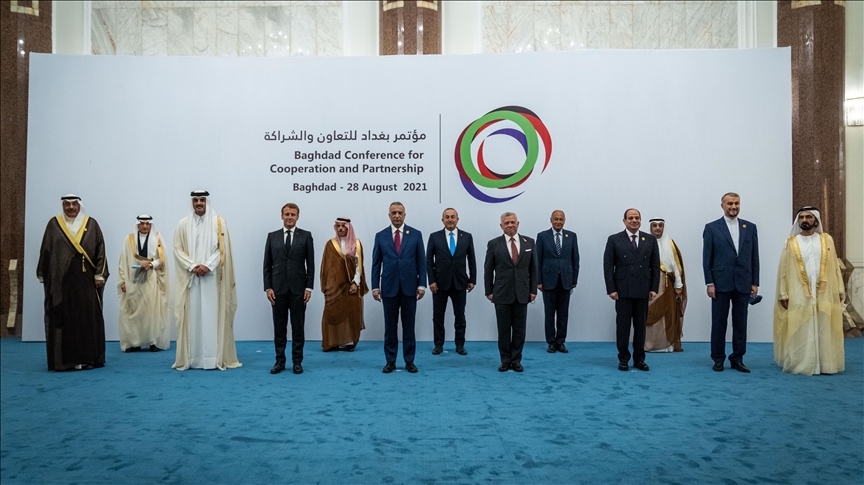 On Saturday, August 28, Iraq’s capital Baghdad witnessed a rare meeting of most major regional players in West Asia, called the Conference on Partnership and Cooperation. It was the first such regional meeting since the Arab Summit in 2012 and was considered an attempt to create an alternative regional arrangement for stability after the eventual withdrawal of all American combat troops from Iraq by the end of the year.

French president Emmanuel Macron was also present as France was the co-host of the event.

Though no formal statement was issued after the meeting, the reports of the discussions indicated that the conference was focused on possible circumstances of the post-US withdrawal from Iraq and a possible revival of ISIS.

A section of Iraqi politicians fears that the resurgent ISIS can try and further the instability in the country once all US troops leave. The US has around 2,500 combat troops in Iraq, and as per the deal signed between prime minister Mustafa al-Kadhimi and president Joe Biden in July, they are set to leave the country by the end of the year. Fearing that Iraq will face a situation similar to Afghanistan, where the Taliban came back to power following the chaotic US withdrawal last month, the prime minister is seeking international support.

In July, ISIS took responsibility for a bomb blast in Baghdad that killed around 30 people. A similar blast took place on Sunday, September 5, near the northern city of Kirkuk, which claimed at least 12 lives. Though the Iraqi parliament passed a resolution last year following the assassination of Iranian general Qassem Soleimani and the commander of Iraqi PMF Abu Mahdi al-Muhandis asking all foreign troops to leave the country, it looks like the Iraqi government is trying to find ways to retain some of those troops. The US stated that the training and assistance to Iraqi forces will continue even after all combat troops are withdrawn. During the conference, Macron also hinted that French troops would not withdraw from the country, “no matter what choices America makes” and would remain in the country to help the Iraqi government fight “terrorism.”

Talking to the Middle East Eye, Ammar al-Hikma, the leader of Iraq’s Al-Hikma movement, hinted that some sections in the country are okay with the French troop presence. He argued that, unlike the US, “France is a regionally accepted international player” and, most importantly, one that is “not rejected by Iran.”

One of the main agenda items for discussion at the Baghdad conference was the war in Yemen and the relationship between rivals Iran and Saudi Arabia. Iranian foreign minister Hossein Amirabdollahain met with his counterparts from the Gulf countries during his Baghdad visit. The Iraqi foreign minister Fuad Hossein indicated that the talks between Iran and Saudi Arabia, which have been going on since April this year in Baghdad, will continue.

Al-Jazeera reported that Saudi Arabia is considering reopening its embassy in Tehran, which was closed in 2016 after the violence following the execution of a Shia cleric.

The numerous conflicts in the region, such as wars in Yemen and Syria and issues of the economic collapse of Lebanon, were also raised during the meeting. Reports indicate that Iraq is seeking to be the platform for all such bilateral and multilateral dialogues in the future. The wars in Yemen and Syria have been sites of rivalry between Iran, Saudi Arabia, and Turkey. Saudi Arabia has often alleged that Hezbollah and the Houthis are Iranian proxies which work against its interests in the region, which the latter has denied. Iran, on the other hand, sees Saudi Arabia as carrying forward the US and Israeli agenda in the area.

The fact that Iran’s new government chose to send its foreign minister to the meeting despite the general perception of its being a hardliner shows the importance it attaches to such regional initiatives. Last year, Iran’s previous foreign minister Javad Zarif proposed Hormuz Peace Endeavour to resolve all outstanding and future conflicts in the Persian Gulf region without any external interference. He had also voiced hope during an interview with Al-Jazeera in 2019 that countries of the region would seek mutual assistance and cooperation to resolve their differences instead of relying on foreign military forces for peace.

An article in the Tehran Times indicated that though Iranians were unhappy with the absence of Syrian representatives in the conference, they remain optimistic that the Baghdad conference will open opportunities for future regional cooperation and dialogue.