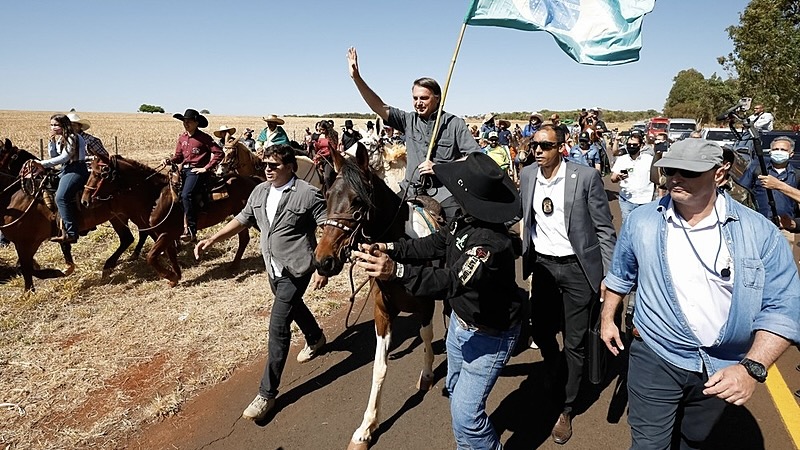 The Brazilian political and institutional crisis has taken on dramatic dimensions since Jair Bolsonaro became the President of the Republic in 2019. Since then, the Brazilian nation, which had experienced disastrous effects of the preposterous removal from office of President Dilma Rousseff through an illegal impeachment process in 2016, has gone downward in an endless spiral of senseless and grotesque actions carried out by the head of the government.

President Bolsonaro came to power in 2018 through an election affected by judicial manipulations that excluded former President Luiz Inácio Lula da Silva. Lula was a victim in that same year of an abusive arrest that lasted 580 days. After his release, the Brazilian Supreme Court admitted the problematic and biased conduct of judge Sérgio Moro, who handed down Lula’s conviction without evidence, and finally overturned it in 2021.

The policies of Bolsonaro’s administration have been catastrophic. The integrity of Brazilian state institutions and democratic freedom have been the object of continuous threats and attacks. The President of the Republic relentlessly challenges the balance of powers, and evokes symbols and measures of the military dictatorship, which was established in 1964 and ended in 1985. As a retired captain, President Bolsonaro flirts with military intervention to assert his political purposes, in an aggressive stance toward the Federal Constitution of 1988.

Bolsonaro’s administrative method swings between manipulating irrational and aggressive fanaticism of his supporters and a progressive annihilation of the public policies and the institutional reliability of the diverse sections of his public administration. It is not exactly a government but rather a misgovernment of fascist inspiration, whose ideological matrix associates far-right agendas in the cultural arena with the right to bear arms, while simultaneously denying the separation of Church and State and supporting neo-liberal economic policies. He seeks to promote dangerous and unrestrained deregulation, profoundly affecting the protection of human, social, labor, and environmental rights.

The denial and ineffective performance of President Jair Bolsonaro and his government in the context of combating the COVID-19 pandemic has multiplied the damage and suffering of the Brazilian population. A year and a half after the beginning of the global health crisis caused by the outbreak of the new coronavirus, Brazil ranks the second nation most affected by deaths (almost 600,000 fatalities). Brazil is also the third in the number of cases in international comparative terms (about 20.4 million infected). Such numbers far exceed the proportional relationship between the Brazilian population and the world population. Undoubtedly, the government’s conduct has been decisive in creating this terrifying picture. Unbelievably, these gigantic humanitarian losses have been enhanced by a deliberate and systematic boycott and sabotage of prevention measures, carried out and encouraged by the President of the Republic, who even went so far as to intentionally delay the vaccination process.

Besides damaging democracy and social rights, President Bolsonaro works to corrode republican values, according to which the government must impartially balance public and private interests, encourage administrative transparency, and ensure social accountability. His administration frequently prioritizes family and personal interests over public ones. Ignoring all considerations, President Bolsonaro subverted the principles of the Access to Information Law (Law No. 12,527/2011), using exceptions to the general rule of transparency and disclosure of public documents to impose unjustifiable document secrecy. He placed a hundred-year ban on the release of records about his children’s access to the offices of the presidency and those regarding the prosecution of General Eduardo Pazuello, one of his former health ministers with a disastrous performance during the pandemic, who attended a political rally in violation of military rules.

Another egregious attack committed by President Bolsonaro against constitutional checks and balances stems from his permanent effort to co-opt Attorney General of the Republic, Augusto Aras, whose office has shown excessive tolerance toward the legal follies carried out by the President and his team. There has been little attention to the constitutional text and a violation of the tradition of autonomy traditionally observed by the occupants of this office. Attorney Aras’ inexcusable omissions have already engendered numerous formal questions from his own colleagues at the Public Prosecution Office, members of Congress, and representatives of civil society. He has demonstrated an anomalous alignment with the President of the Republic, through frequent acquiescence to the wishes, whims, and above all legal transgressions of the President.

The authoritarian escalation of the improprieties by the current Brazilian president reached its peak recently when he filed a claim asking Congress to impeach one of the Supreme Court justices. This belligerent action is an unprecedented event in Brazilian history, and it follows a consistent and intentional misuse of the office of a President of the Republic. The reason for his action stemmed from the president’s dissatisfaction with decisions taken by Supreme Court Justice Alexandre de Moraes in the normal and legitimate use of his powers, when he ordered the arrest of one of the president’s supporters and issuance of warrants for the arrest of others. The purpose of his action was to disrupt extremist networks dedicated to planning the violent removal of members of the Supreme Court during the upcoming September 7th, the Brazilian Independence Day celebrations. Institutional tension has reached a point of no return, raising fears of even more dangerous future confrontations. President Bolsonaro definitively abdicated any peaceful solution to the artificial crisis among the executive, legislative, and judicial branches of government that he himself created. He bets on violating one of the essential bases of democratic coexistence among the country’s authorities, since his next step may be a simple disregard for the supremacy of judicial decisions.

Bolsonaro’s administration is demonstrating clear signs of exhaustion in terms of credibility and social support. Despite growing protests in the nation’s streets, lawsuits indicating the commission of crimes, and even the accusations against Bolsonaro at International Criminal Court in The Hague, his government survives due to behind-the- scene negotiations with those accustomed to support him in exchange for all sorts of political favors. This is the reason why the approximately 130 requests for impeachment against the President of the Republic registered in the House of the Representatives are blocked by Artur Lira, the president of that chamber of the Brazilian congress. Lira is also the guarantor of the spurious agreements between a morally ruined government and eager politicians for funds and government positions at any cost.

At this point, a majority of Brazilians are counting down the days for the 2022 presidential elections, the only concrete and likely way to end President Bolsonaro’s disastrous mandate. Meanwhile, they organize and seek to react, as far as possible, to the fascist mobilization of the government’s supporters that now seems to be leaning towards carrying out some kind of coup d’état.

Mauro Menezes is a lawyer, Master in Public Law, a former President of the Ethics Commission of the Presidency of the Republic of Brazil, and a member of the Brazilian Association of Jurists for Democracy (ABJD).

Carol Proner is a lawyer, PhD in International Law, a Professor of International Law of the Universidade Federal do Rio de Janeiro (UFRJ), and a member of the Brazilian Association of Jurists for Democracy (ABJD).