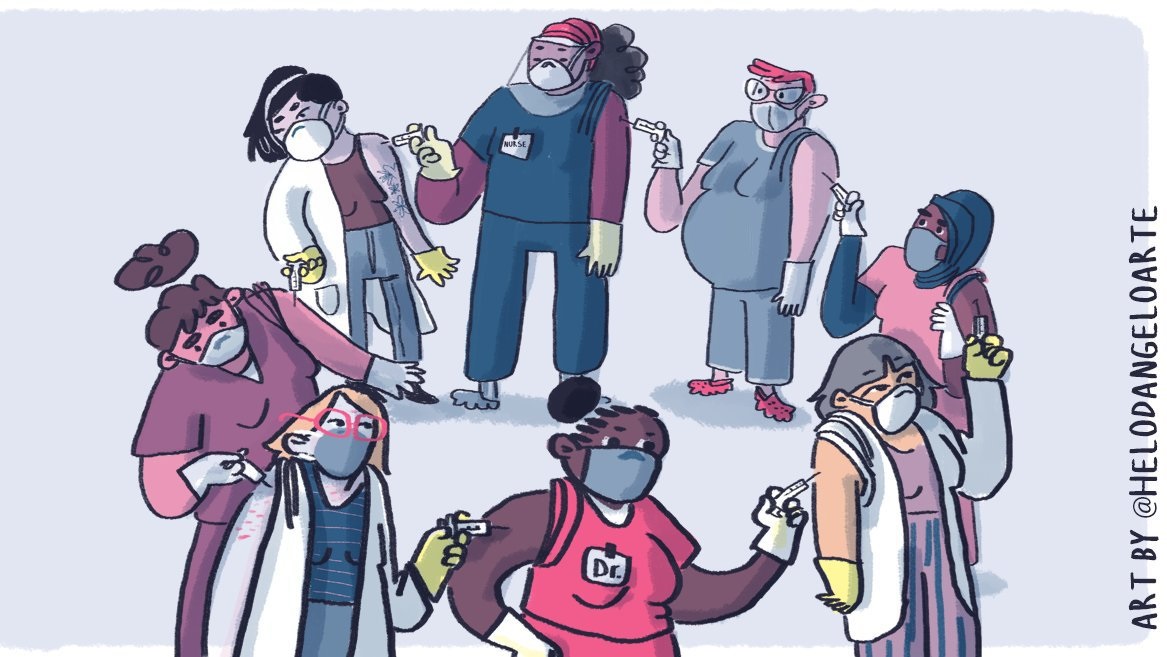 “The lack of a feminist perspective on access to medicines (and to health care generally) so far means that in this COVID-19 pandemic, women are being devastated, but do not feature in government lockdown decisions, or vaccine roll-out, as needing special attention,” says Chee Yoke Ling, international lawyer, activist, and Director of Programmes at Third World Network (TWN).

The disproportionate impact of the pandemic on marginalized communities has become increasingly apparent. Despite this, healthcare policies have been slow to respond to structural inequalities based on factors such as gender, race, class, caste, disability, or even citizenship status. It is to address this gap that TWN and Development Alternatives with Women for a New Era (DAWN) have launched the Feminists for a People’s Vaccine campaign (FPV). The initiative has brought together feminist voices from the Global South to challenge barriers to equitable, accessible, and affordable COVID-19 vaccines, medicines, therapeutics, and equipment or simply — Access to Medicines (A2M).

“When disease hits and a country’s health system is weak, women suffer more because they provide care at home and illness adds to that burden. In households that are poor, there are often biases – men and sons get to see a doctor, get treated or get vaccinated over women and girls. The disproportionate access of women to health care is not new. We have seen it in other infectious diseases outbreaks and in day-to-day health needs,” says Chee Yoke Ling.

Responses to earlier epidemics, including HIV/AIDS and Zika, have also not considered gender-based differences. The FPV Campaign points out that despite accounting for more than 50% of people living with HIV (PLHIV), women are not a recognized key population. In the context of the current pandemic, the Sex, Gender, and COVID-19 Project’s health policy portal examined 388 policies implemented across 76 countries. It found that only 9% addressed the role of gender in driving health outcomes.

Moreover, in cases where public health infrastructure has been inadequate, the burden of care has predominantly fallen on women. A 2021 study by Dalberg showed that 41% of Indian women from low-income houses, surveyed at the end of 2020, reported an increase in unpaid care work. Women also form nearly 70% of the world’s healthcare workforce. However, they are mostly concentrated in low-paying jobs on the frontlines, often without proper safety or benefits.

According to Chee, “the FPV campaign is a rallying point for us to move fast and together, to make up for the lost time when feminists did not make access to medicines an integral part of the struggle for women’s rights and equality. The power of the women’s rights movement to organize and advocate can be phenomenal, and the energy and response to the FVP since its launch is very exciting and a major step in anchoring a feminist perspective for our entire health care system.”

A feminist perspective is also crucial since it foregrounds issues such as gender-based violence, social protections, and housing when it comes to healthcare policies. The International Labour Organization has reported that 4.1 billion people worldwide do not have access to social protection. Lack of access to healthcare and other forms of aid can be detrimental to the survival of marginalized communities. Factors such as employment discrimination, which pre-date the pandemic, have placed certain groups at higher risk. At least 18 trans women are reported to have died in the city of Yogyakarta in Indonesia during the pandemic. However, the cause of death in most cases was not COVID-19 but conditions of malnutrition — something that could have been prevented by better social policies.

A key area of focus for the FPV Campaign has been the ongoing debate surrounding the Trade-Related Aspects of Intellectual Property Rights (TRIPS) Agreement. Chee argues that: “The TRIPS Waiver is a very necessary tool to open up pharmaceutical monopolies and allow as many capable manufacturers as possible to produce life-saving vaccines and treatments medicines. Feminists fight every day for human rights, for equality and justice. Taking on the waiver is very much part of that larger struggle.”

Since October 2020, countries including South Africa and India have been pushing for a temporary waiver of TRIPS, a proposal that more than 100 countries have supported. However, it has been repeatedly blocked by high-income countries, especially the European Union. The oft-cited argument is that waiving intellectual property rights (IPRs) will somehow disincentivize innovation. However, Chee argues that, in fact, it is important to think of IP, not in terms of a right but a privilege.

“Using a patent or a trade secret claim to monopolize a market for profiteering purposes, at the expense of lives and health is unacceptable. Frame IP as a “right” and it can be elevated to something so sacrosanct that it cannot be touched, as we hear from the statements made by the waiver opponents. Instead, see it for what it is supposed to be — a societal reward for innovation, which in turn, cannot deny society the benefits of that innovation — and thus a privilege, and the waiver adoption would be simply the logical and right thing to do.”

While blocking necessary measures to expand vaccine manufacturing, rich countries have simultaneously been taking doses from the limited vaccine supply of the COVAX initiative. Moreover, the FPV campaign argues that the initiative does not address the critical issue of access to technology and instead relies on voluntary, instead of compulsory, licensing. The IP system has effectively blocked the scaling up of manufacturing despite several countries in the Global South having manufacturing capabilities. “There will be a need to organize at the country and regional level to identify collaborative efforts so that countries with no manufacturing capacity will not be left out even if there are more supplies,” says Chee.